Disaster from the unknown 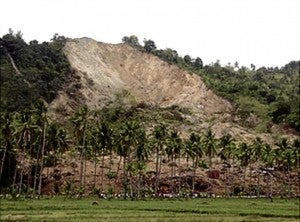 MORE than 50 people perished in the Solonggon Landslide where houses, built at the foot of a mountain slope, were crushed or buried.

The 6.9-magnitude Negros Oriental Earthquake of Feb. 6 came as a surprise to many, geoscientists included, because it occurred in an area where no           active faults were known to exist. Government seismologists initially spoke of a “blind fault” as the source of the earthquake. Three days after the main shock, I set foot on the disaster-stricken place, hoping to find convincing proof of the existence of an unknown geologic structure.

To geoscientists, it is not actually a surprise that Negros Island would be hit by an earthquake of this magnitude. A previous large earthquake with an approximate magnitude of 8 has been associated with the Negros Trench, a geologic feature produced by the downward movement of a tectonic plate, called the Sulu Sea Plate, underneath Panay and Negros Islands.

However, considering its epicentral location in the Tañon Strait and shallow depth of focus, the Negros Oriental Earthquake cannot be explained directly by activity along the Negros Trench.

While there was a discrepancy in the locations calculated by the United States Geological Survey (USGS) and Philippine Institute of Volcanology and Seismology (Phivolcs), both indicated that the epicenter was near the coast between the towns of La Libertad and Tayasan. The depth of focus was estimated to be between 10 and 15 kilometers into the earth.

Normally, earthquakes of this magnitude emanating from these shallow depths would produce a rupture that penetrates the ground surface. In the case of the Negros Oriental Earthquake, there was no clear evidence of a surface ground rupture, prompting scientists immediately after the earthquake to point to a “blind” fault as the culprit.

During earthquakes, seismologists identify the type of faulting by calculating a “focal mechanism solution” or an FMS. As calculated by USGS, the FMS of the Negros Oriental Earthquake indicated a thrust-fault mechanism. Since there was no ground rupture associated with it, the fault that caused the earthquake maybe more aptly called a “blind thrust fault.”

The absence of associated ground rupture renders the identification of a blind thrust fault a challenging undertaking. Since the structure is buried under the uppermost layers of the crust, scientists employ indirect techniques.

One such technique is to understand the positioning of rock layers above the suspected trace of the blind fault. Another is to use earthquake data to trace the outline of the fault plane both on the ground surface (map) and on a vertical cutout of the earth (cross section).

A geological cross section  from the coast to the mountains of Guihulngan City and La Libertad reveals folded-rock sequences burying the projected trace of a fault plane. It is determined by plotting the epicentral location of the main shock and hundreds of aftershocks.

These observations generally agree with the theory of a blind fault. However, much science has yet to be performed to understand better the nature of the fault that caused this big earthquake.

The most badly damaged areas include the town centers of Guihulngan, La Libertad, Jimalalud, Tayasan and Ayungon. Stretching for over 30 km, these population centers are situated at the mouth of major rivers and their flood plains. Most of the damage to infrastructure can be associated with liquefaction and ground settlement.

Many population centers in eastern Negros are built over sandy ground as these are found near the coast and/or at river deltas and swamps. Saturated sandy ground when shaken by an earthquake behaves like a liquid and undergoes a process called liquefaction. When the ground liquefies, it loses the ability to hold infrastructure built over it. The latter then fails as a result of the softening of the ground.

At the epicentral area, the USGS estimated that the ground shook at the rate of about 4 meters every second. This shaking is intense, since it is about half the rate at which a free-falling object drops to the ground in one second.

The effects of such intense ground shaking in Negros Oriental include collapsed bridges, crumbled houses, buckled roads, especially when these structures are built with substandard materials and rooted in shallow foundation. Along the national highway, road pavements experienced lateral spreading, a process involving the splitting of the road along its axis.

A village farmer in the hills of Sitio Pitogo a few kilometers west of the highway in Barangay McKinley, Guihulngan, recounts the story of a boy flying a kite across another farm hill. Moments after the earthquake struck, the farmer saw the boy, kite in tow, slide with the hill for a horizontal distance of about 200 meters as if he was “riding a wave.”

Moments later, the farmer realized that the boy was actually on top of an enormous landslide, about 500 meters wide and about 1 kilometer long. Several others experienced the same wave ride and were lucky to have stayed at the top of the wave as it came to rest. Others were, however, unfortunate to have been at the wave break, or at the “toe” in landslide terminology, where houses were crushed into bits or buried entirely by tons of slide debris. Within these landslides, vertical movements of the ground can be as much as several tens of meters, rendering displaced roads impassable.

Death at foot of mountain

At the foothills of Barangay Solonggon in the town of La Libertad, a settlement of about 40 households was buried under millions of cubic meters of rocks and soil. The damage in Solonggon was much worse than that in Pitogo since the households were settled at the foot of the slope, where the toe of the slide developed.

After the earthquake, the largest landslide mass, measuring about the size of the Makati Central Business District (3 sq km) was observed in Barangay Planas, located at the foot of a mountain range several kilometers west of the Guihulngan proper.

A landslide that developed along the Tinayunan River in Barangay T-Beach, a village that owes its name to Tinayunan Beach along the southern coast of Guihulngan, but whose extent reaches the low mountains several kilometers to the west, involved rocks and soil falling from both flanks of the river.

This caused landslide material to create an artificial dam, trapping the water in the upper sections of Tinayunan River. Rains started pouring three days after the earthquake and by Feb. 10, a considerable amount of water was impounded upstream of the landslide-dam, creating an artificial lake on the brink of bursting.

This put settlements downstream at great risk  in the event of a breach of the artificial dam, prompting government geologists and engineers to immediately advise Guihulngan Mayor Ernesto Reyes to issue a forced evacuation order to an endangered community that same night.

Since the spate of disasters following the Cherry Hills Landslide of 1999, government authorities, scientists and local government officials alike have warned time and again communities to avoid settling in areas prone to the hazards of geological and meteorological phenomena such as earthquakes, volcanic eruptions and typhoons.

Some have heeded these warnings, but many more have not, making them most vulnerable to disasters. Every time these disasters happen, we encounter the same experiences and learn the same lessons. If there is a new lesson that can be learned from the Negros Oriental disaster, it is about complacency.

The next question is: Where are the other blind faults?

(Mario Aurelio, Ph.D., is an associate professor at the National Institute of Geological Sciences in the University of the Philippines. He specializes in the study of active faults and earthquakes. He thanks the Philippine Air Force, geologists Abraham Lucero Jr. and Rhodel Sarande, and geology student JM Boquilon.)

Read Next
Editorial cartoon, March 4, 2012
EDITORS' PICK
New Year, New Rediscoveries
Acer Philippines welcomes you to its first flagship store
Is your company a growth champion? Stand up and be recognized!
WHO says fabric facemasks still work against virus variants
UP president challenges AFP claim on Reds’ campus infiltration
Biden says Covid-19 expected to kill ‘well over 600,000’ in US
MOST READ
Ate Vi’s message to those against ABS-CBN’s franchise renewal
Cop, 12 others killed in Maguindanao shootout
NBI files raps vs top execs of 2 tech firms
OVP spokesman tells Mocha Uson: Don’t drag us into your nonsense
Don't miss out on the latest news and information.

Cop, 12 others killed in Maguindanao shootout