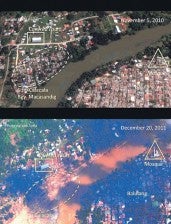 Before ‘Sendong’ and After ‘Sendong’. FEW OF the houses on a bank of Cagayan River in Sitio Calacala remained after the storm. Photo by Yeb Saño

The sooner we realize that disasters are never natural but always a product of hazard and history, that a people’s vulnerability is not a given of place but derivative from the past, the better we are likely to understand what fate might await us in a world of changing climate.
Kurt Tsuo, Harvard International Review, 2011

WHEN climate change-driven or exacerbated disasters like Ondoy, Peping, Reming, Pedring or Sendong strike, their impact is far-reaching, protracted and nonlinear. A river swelling its banks and sweeping everything in its torrential path is not only a calamitous occurrence that affects communities in its basin or littoral areas.

Deforested swaths in once lush rainforests cause not just landslides or massive erosion in surrounding farmlands and villages.

When the Furies of Nature batter homes and livelihoods and leave multitudes reeling in despair, everything we know to be stable or predictable, the quotidian rhythms of life, is displaced or grinds to a halt. In the aftermath of the catastrophic Sendong that pummeled Cagayan de Oro and Iligan, 50,000 people were rendered homeless, more than a thousand perished and hundreds more reported missing. But the far greater tragedy is the trauma and loss for people and families, a nonphysical dislocation so wrenching and indefinite.

In Mindanao, new studies show that displaced individuals since 2010—now over 800,000—left their homes and farms not primarily because of the decades-old Muslim-Christian conflict in the region, but because of climate-related or induced conditions.

In the last quarter of 2011, urban centers of Pampanga and Bulacan were inundated for weeks, driving thousands out of their homes.

This is the phenomenon of what the United Nations calls the multiplying of  “climate refugees,” which we now increasingly see in many more parts of the world in the wake of calamities that have become more frequent, more ferocious and more destructive.

The United Nations Institute for Environment and Human Security ranks the Philippines the third most vulnerable country to climate impact.  The country has numerous geohazard zones with crowded settlements, which means risks and costs to lives and property can be extremely high and concentrated. Yet, the capacity to adapt to future risks is low, given weak infrastructure, high poverty incidence and overall lack of preparedness. 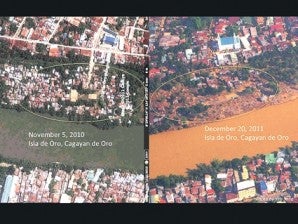 Before ‘Sendong’ and After ‘Sendong’. HOUSES on Isla de Oro, a sandbar, were swept away by rampaging waters of Cagayan River when Tropical Storm “Sendong” hit Cagayan de Oro on Dec. 17. Photo by Yeb Saño

The environment is the only “social security system” of the poor. The Labor Force Survey shows that 35 percent of the country’s 33 million labor force is dedicated to agriculture, fisheries, and forestry—all dependent on coastal ecosystems, river basins and watersheds. The National Mapping and Resource Information Authority  notes that if sea levels rise to 100 centimeters, 130,000 hectares of the country will be inundated, affecting over two million people.

Imperative, hot spots
In 2008 some of us on the environmental front convened the Philippine Imperative on Climate Change. This was an initiative taken by leaders in civil society and academia, in collaboration with the business sector, to heighten understanding of climate-change impact and risks, and the necessary adaptation strategies local governments and businesses could take to reduce the risks. For industries this meant looking at alternatives to large carbon footprints, and having more efficient energy use and innovative management systems.

Our mapping of at least 25 vulnerable climate “hotspots” in the country showed that a combination of sea level rise, storm surges, increased flooding, loss of surrounding forest cover, siltation, subsidence and saltwater intrusion in several coastal towns and cities would result in extensive demographic dislocation and long-term socioeconomic repercussions.

The cities of Cagayan de Oro and Iligan, as well as the National Capital Region and Central Luzon, Bicol region, Cebu City and Mactan Island, among other places, were already identified then in simple simulation software as high-risk or flooding-prone areas.

This was echoed just last year by the Climate Change Congress of the Philippines headed by Archbishop Antonio Ledesma of Cagayan de Oro in the first two months of the Aquino administration. The studies of both groups made what would otherwise be highly technical data more accessible to the larger public.

On a whole we highlighted the need to appreciate scientific information, build scenarios, and decisively plan and prepare for risk-reduction or even “zero-casualty” targets, as Albay under Gov. Joey Salceda has exemplified. While we were sometimes called “alarmists” or “doomsday advocates” in nationwide dialogues, many other communities embraced the urgency for climate-change responses.

If rethinking becomes imperative in light of these climatic changes, how and where do we begin? How can we frame our development planning at the national and local levels, as we map and measure what Newsweek has called “the new normal” of rising temperatures, intensifying typhoons, widespread flooding and devastating droughts?

We start with information and knowledge-management. The wealth of empirical data with GPS and other satellite-driven technology allows us to view and utilize scientific information (from simple simulations to the more sophisticated assemblage of graphs and maps) as sound tools for preparedness, planning and policy-making.

It follows that when we are able to simulate scenarios and extrapolate from aggregated data, we will craft infrastructure programs differently.  From here on, Cagayan de Oro and Iligan cannot rebuild roads or bridges or plan for new airports or seaports without studying where the impact would likely be or how extensive.

Houses and buildings will have to be more climate-smart or climate-proof, not simply as a matter of “green design,” but of ensuring settlements are resilient and able to adapt to harsh environmental vicissitudes. And taking into account economic costs and benefits in the context of climate-change realities, where and how we manage investments will be crucial.

Surely, investments in, say, agriculture or real estate cannot be made in a vacuum. Entire housing subdivisions in Iligan on the riverside were violently swept to sea; new developments cannot take place without understanding the state of the Lanao-Bukidnon watersheds and the mapping information of hazard and climate-impacted zones.

In agriculture, climate-resistant varieties of rice or other crops will have to be cultivated. In other words, the appreciation of risk and risk management will have to change, redefining insurance systems altogether.

These are easier said than done, of course. But that is why governance and institutions are critical. When government provides the platforms for intervention, it becomes a strong catalyst for business and other sectors to be engaged and for communities to act with a common direction—whether these have to do with ensuring early-warning systems, having quick response and rescue mechanisms, or establishing long-term integrated reforestation-watershed, agroindustrial development, and better land-use programs.

That is why the National Climate Change Action Plan, which President Aquino signed in late November, mandates a clear across-the-bureaucracy (led by the Climate Change Commission) 18-year roadmap for clear adaptation strategies.  This Climate Change Plan is seminal as it is timely—along with the National Disaster Risk Reduction and Management Plan as defined by Republic Act No. 10121—to identify the poorest and most vulnerable areas in the country.

These will have to be tied to government budgetary and policy support as well as private partnerships to effectively put three Is into place and practice.

But information, investments and institutions on a whole will not have optimal reach and intergenerational impact if there is no sustained leadership that is driven both by integrity and imagination.
Looking forward
We need committed leaders who will boldly face political and economic challenges in the context of a complex and rapidly changing world, not only because of globalization and the advances of telecommunications, but also because of a fuller understanding of ecology and the fragility of the planet’s life-support systems.

We do not lack for human ingenuity and resilience. As WWF head Lory Tan spells out in an article below, cities and urban areas of concentrated risks will require the best possible use of local knowledge, local competence and local capacity. We cannot be trapped in what scholar Greg Bankoff calls “a culture of disaster,” where the constant threat of disaster is integrated into the schema of daily life.

Like the quote above, understanding the interplay of “hazard and history” should afford us the capacity for greater resilience, foresight and innovation—the essence of adaptation.

Rare earth metals at the heart of China’s rivalry with US, Europe