Can we beat poverty? 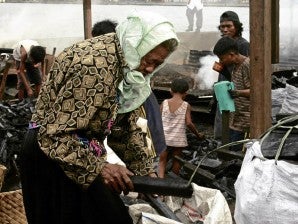 (Editor’s Note: President Aquino’s approval rating declined to 72 percent in August from 77 percent in November.  The decline may be partly due to a double-digit rise in disapproval of his efforts at “reducing the poverty of many Filipinos” from 21 percent in May to 36 percent last month.

So how is the Aquino administration addressing poverty? The

The depth of poverty in the Philippines will require efforts on a massive scale. A multidimensional approach grounded in economic growth and its distribution will therefore be needed to effectively reduce poverty.

The participation of all stakeholders – local governments and government agencies, the private sector, civil society, and the poor themselves – is vital.

The government’s resources have been focused on Pantawid Pamilya, which will benefit 4.3 million households in the next three years through conditional cash transfers that are linked to the health and education targets of the Millennium Development Goals. We are also targeting 5.2 million poor families for subsidized health-insurance coverage. This is the first time many poor Filipinos will have been helped by the government.

The goal of Pantawid Pamilya and PhilHealth is to deliver direct and substantial assistance to the poor in the quickest possible time. The targeting and administration of beneficiaries is therefore centralized.

These programs are geared toward addressing the health and education needs of the poor. By improving school attendance and health conditions of the poor, intergenerational poverty can be significantly arrested.

Our long-term goal is ultimately the empowerment of the poor. We must convince the poor that, with a little bit of help, they can be the source of their own deliverance. The poor must actively participate in designing and implementing their own poverty-reduction programs. This can only be possible if the center of gravity for these programs is local: clearly, the poor can best be organized at the municipal level.

Our localization strategy maximizes the impact of existing programs by generating greater local government and civil society participation and providing a framework that links local and national antipoverty planning.

We have therefore compiled a list of over 600 municipalities based on a combination of criteria: poverty incidence and magnitude, as well as access to Pantawid Pamilya, PhilHealth and Pamana (which focuses on peace and development). These municipalities account for almost half (40,298,709) of the total population, including around 12 million of the country’s poor, who are concentrated in four regions: Autonomous Region in Muslim Mindanao (ARMM), Caraga, Region 5 and Region 8.

To focus on these municipalities, the community-based monitoring system will be used as a mapping tool for antipoverty programs. Support for nonfocus municipalities will be demand-driven, with special attention given to members of the House of Representatives and/or governors supporting programs that cut across more than one municipality.

As data on growth and poverty incidence from 2000 to 2009 indicate, rapid economic growth is a necessary, but ultimately insufficient, condition for poverty reduction. Our development policy is therefore based on “inclusive growth.” While social protection programs (e.g., Pantawid Pamilya) lessen the income gap, asset reform programs (e.g., agrarian reform) address the “asset gap” between rich and poor.

Because almost two thirds of the poor live in rural areas, we will pay particular attention to developing agriculture by crafting policies that correct distortions to reduce the economic and social opportunities of the poor in rural areas.

As Dr. Emmanuel de Dios (1993) has noted, growth affects poverty reduction if the production factors and resources being enhanced are those owned by the poor, or if the returns on their outputs increase with growth. Regrettably, the sector growth pattern since 2000 has been biased against agriculture and toward the least labor-intensive sectors.

To address the unequal distribution in regional growth, our localization program will focus on the poorest regions. But in order to more fully align poverty programs with economic growth programs, we propose to divide the country into three economic zones:

Poverty programs can then be tailored to the needs of each zone: marketing and business development in Zone 1; production and roads in Zone 2; and direct assistance and service delivery in Zone 3.

This “economic geography” approach will link poverty programs with other economic development programs and help shape budget allocations and multiyear investment plans by providing a unified framework for bringing local and national antipoverty planning together.

A bottom-up budget process will undercut existing circuits of patronage. Inter-agency planning on poverty programs within the Human Development and Poverty Reduction Cabinet Cluster will shift decision-making away from areas where patronage syndicates might be operating.

Thus, the political economy at the local level can be changed if local officials figure more directly in the planning, service delivery and implementation of antipoverty programs.

With these measures, we hope to build pathways to free the poor from the grim and implacable realities of persistent poverty.

Some 2.3 million poor households nationwide are receiving conditional cash transfers as an incentive to have themselves and their children regularly checked in health stations (P500 per month per household) and for children aged 6-14 to attend public schools (P300 per child per household, for up to three children) or to receive a maximum monthly cash grant of P1,400 per household.

For the immediate to medium term: Health care reform will expand PhilHealth toward universal coverage. A target of 5.2 million indigents will be enrolled in PhilHealth, giving priority to ARMM, Zamboanga Peninsula, Eastern Visayas, Bicol, Mimaropa, Socsargen and Caraga.

For the immediate to medium term: Water infrastructure will be provided to 483 “waterless” municipalities, where over 50 percent of the population lacks drinking water and often suffer from waterborne and sanitation-related diseases.

For the medium to long term: Education-For-All. Resources will be devoted to basic education, aiming for universal enrolment by 2016, by addressing critical bottlenecks: school facilities, teacher positions, textbooks, teacher training and scholarships for poor but deserving students.

For the opportunity poor: The goal is to provide access to productive resources and asset reform (agrarian reform; distribution of ancestral domain titles; fisheries and aquatic resources reform; low-income housing and urban land reform). This also involves completing the land distribution covered by the Comprehensive Agrarian Reform Program (CARP) within five years and the remaining 4.2 million hectares (out of the targeted 10 million hectares) of ancestral domain land under the Indigenous People’s Rights Act. Around 3.4 million hectares are already in the pipeline for distribution.

Of the remaining 1.102 million hectares CARP should cover by 2014, coconut farms represent the largest percentage at 350,000 hectares, one-third of which are large, private agricultural lands. This distribution of CARPable coconut lands will be supported by an industry development plan and a road map crafted with the help of civil society.

Access to microcredit: For the 5 million poor needing credit for microenterprises, access to microcredit/finance and markets will be provided so they can become part of the solution: creating jobs for themselves and work for others.

Self-Employment Assistance Kabuhayan: Expanding this at the local government level and encouraging community-based microcredit organizations to assist in entrepreneurial development.

Expanding the Payapa at Masaganang Pamayanan (Pamana) program for barangays in conflict areas: Assisting 13 percent of all barangays in conflict-affected areas, where clashes between government forces and insurgent groups are taking place, leading to significant numbers of evacuees and internally displaced persons.

(Jose Eliseo M. Rocamora, a Cabinet secretary, is the head of the National Anti-Poverty Commission.)

Read Next
Paradox of growth
EDITORS' PICK
When will PH get enough COVID-19 vaccines? ‘I really don’t know,’ Duterte says
Smart introduces Smart Barkada with the launch of Double GIGA
Duterte: Authorities may take over hotels, but it’s not a ‘remedy’ in a democracy
Smart is fastest 5G Network in PH – Ookla
Duterte defends govt’s efforts vs COVID in 2020
LT Group, Inc. Notice of Annual Shareholders’ Meeting 2/2
MOST READ
‘Duterte a total failure as leader. He must step down’ – group
Duterte ‘privately’ dealing with China invasion in West PH Sea – Palace
Ramon Tulfo says gov’t running PH like a ‘headless chicken’
Stop acting like a colonizer, PH business groups tell China
Don't miss out on the latest news and information.

When will PH get enough COVID-19 vaccines? ‘I really don’t know,’ Duterte says

Duterte: Authorities may take over hotels, but it’s not a ‘remedy’ in a democracy