Control over the land must be in hands of farmers
Philippine Daily Inquirer / 10:24 PM November 26, 2011 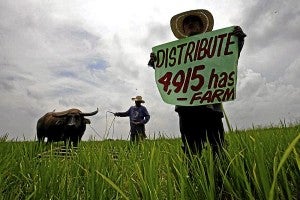 A farmer calls for the distribution of Hacienda Luisita to farm workers. RAFFY LERMA

(Editor’s Note: By a vote of 14-0, the Supreme Court ordered on Nov. 22 the distribution of land to farm workers of Hacienda Luisita, an estate owned by the family of President Benigno Aquino III.

The ruling capped the decades-old struggle of farm workers in the sprawling sugar plantation to own a piece of land. At least 14 farm workers, union leaders and agrarian reform advocates lost their lives in the struggle. Most of them were shot dead.

“I am happy because I will have something to leave to my grandchildren and they can say that this land is the product of their grandmother’s struggle,” said Anita Flores, 65, after the court issued the ruling.

Below is part of the ruling under the heading “Control over Agricultural Lands” and the order to distribute land to the farm workers.)

After having discussed and considered the different contentions raised by the parties in their respective motions, we are now left to contend with one crucial issue in the case at bar, that is, control over the agricultural lands by the qualified farm-worker beneficiaries (FWBs).

Upon a review of the facts and circumstances, we realize that the FWBs will never have control over these agricultural lands for as long as they remain as stockholders of HLI (Hacienda Luisita Inc.). In our July 5 decision, this court made the following observations:

There is, thus, nothing unconstitutional in the formula prescribed by Republic Act No. 6657. (The Comprehensive Agrarian Reform Law of 1988). The policy on agrarian reform is that control over the agricultural land must always be in the hands of the farmers.  Then it falls on the shoulders of DAR (Department of Agrarian Reform) and PARC (Presidential Agrarian Reform Council) to see to it the farmers should always own majority of the common shares entitled to elect the members of the board of directors to ensure that the farmers will have a clear majority in the board.

Before the SDP (stock distribution plan) is approved, strict scrutiny of the proposed SDP must always be undertaken by DAR and PARC, such that the value of the agricultural land contributed to the corporation must always be more than 50 percent of the total assets of the corporation to ensure that the majority of the members of the board of directors are composed of the farmers.

Any deviation, however, by PARC or DAR from the correct application of the formula prescribed by the second paragraph of Sec. 31 of RA 6657 does not make said provision constitutionally infirm. Rather, it is the application of said provision that can be challenged. Ergo, Sec. 31 of RA 6657 does not trench on the constitutional policy of ensuring control by the farmers. (Emphasis supplied.)

In line with our finding that control over agricultural lands must always be in the hands of the farmers, we reconsider our ruling that the qualified FWBs should be given an option to remain as stockholders of HLI, inasmuch as these qualified FWBs will never gain control given the present proportion of shareholdings in HLI.

Thus, even if all the holders of the 118,391,976.85 HLI shares unanimously vote to remain as HLI stockholders, which is unlikely, control will never be placed in the hands of the farmer-beneficiaries.  Control, of course, means the majority of 50 percent plus at least one share of the common shares and other voting shares.

Hence, control can NEVER be attained by the FWBs. There is even no assurance that 100 percent of the 118,391,976.85 shares issued to the FWBs will all be voted in favor of staying in HLI, taking into account the previous referendum among the farmers where said shares were not voted unanimously in favor of retaining the SDP.  In light of the foregoing consideration, the option to remain in HLI granted to the individual FWBs will have to be recalled and revoked.

In addition to the foregoing, in view of the operative fact doctrine, all the benefits and home lots received by all the FWBs shall be respected with no obligation to refund or return them, since, as we have mentioned in our July 5 decision, “the benefits x x x were received by the FWBs as farmhands in the agricultural enterprise of HLI and other fringe benefits were granted to them pursuant to the existing collective bargaining agreement with Tadeco.”

Only for original FWBs

In this regard, DAR shall verify the identities of the 6,296 original FWBs, consistent with its administrative prerogative to identify and select the agrarian reform beneficiaries under RA 6657.

The fallo of the court’s July 5 decision is hereby amended and shall read:

AFFIRMED with the following modifications:

All salaries, benefits, the 3 percent of the gross sales of the production of the agricultural lands, the 3 percent share in the proceeds of the sale of the 500-ha converted land and the 80.51-ha SCTEx (Subic-Clark-Tarlac Expressway)  lot and the homelots already received by the 10,502 FWBs composed of 6,296 original FWBs and the 4,206 nonqualified FWBs shall be respected with no obligation to refund or return them.

The 6,296 original FWBs shall forfeit and relinquish their rights over the HLI shares of stock issued to them in favor of HLI.  The HLI corporate secretary shall cancel the shares issued to the said FWBs and transfer them to HLI in the stocks and transfer book, which transfers shall be exempt from taxes, fees and charges. The 4,206 nonqualified FWBs shall remain as stockholders of HLI.

After the segregation process, as indicated, is done, the remaining area shall be turned over to DAR for immediate land distribution to the original 6,296 FWBs or their successors-in-interest which will be identified by the DAR. The 4,206 nonqualified FWBs are not entitled to any share in the land to be distributed by DAR.

For this purpose, DAR is ordered to engage the services of a reputable accounting firm approved by the parties to audit the books of HLI and Centennary Holdings, Inc. to determine if the P1,330,511,500 proceeds of the sale of the three aforementioned lots were actually used or spent for legitimate corporate purposes.

Any unspent or unused balance and any disallowed expenditures as determined by the audit shall be distributed to the 6,296 original FWBs.

HLI is entitled to just compensation for the agricultural land that will be transferred to DAR to be reckoned from Nov. 21, 1989, which is the date of issuance of  PARC Resolution No. 89-12-2. DAR and Land Bank of the Philippines are ordered to determine the compensation due to HLI.

The temporary restraining order is lifted.

Plane going to Japan bursts into flames at NAIA runway