Fight for your right (to party) | Inquirer Opinion

Fight for your right (to party) 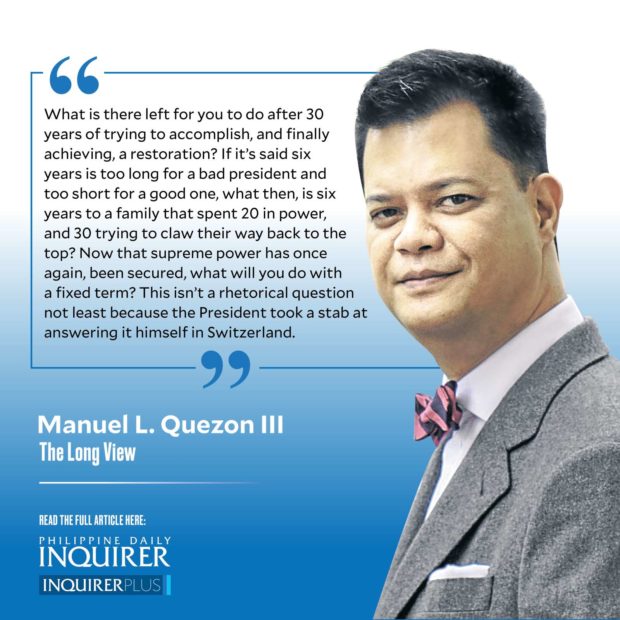 A large, crumbling, roofless mansion located near the Mansion House for many years symbolized the fall from power of the Marcoses and the mixed results of government efforts to recover what they allegedly stole. Over the holidays, I noticed that it had been fenced and walled off, and construction was obviously taking place. Was it a tangible manifestation of the Restoration? But instead, it seems related to the PCGG’s sale of the Hans Menzi house back in 2012. Part of the mixed results stems from what The Guardian reported in a 2016 feature on the Marcos billions: “Marcos and his cronies owned so much of the economy that to seize their assets would crash the banks.” A root-and-branch recovery of the fortune of the Marcoses and their friends would have uprooted the entire system. Meanwhile, by relying on working within the system, the government found itself at a disadvantage as the same Guardian report pointed out: “The PCGG was ordered to seize nothing, but instead to work through the courts. Over the following few years, it became clear that this had handed the initiative to the Marcoses, who had the money to hire the very best lawyers. Soon, dozens of cases were sidetracked by endless technical argument. “

But here is a question I’ve repeatedly asked. What is there left for you to do after 30 years of trying to accomplish, and finally achieving, a restoration? If it’s said six years is too long for a bad president and too short for a good one, what then, is six years to a family that spent 20 in power, and 30 trying to claw their way back to the top? Now that supreme power has once again, been secured, what will you do with a fixed term? This isn’t a rhetorical question not least because the President took a stab at answering it himself in Switzerland. He didn’t just say what everyone knew all along (that, upon returning to the Philippines, it was a matter of both rehabilitation and survival for the family to have one of its own be its political standard-bearer). He suggested how limited his horizons may have been all along. If his default position was a disinclination to be interested in politics; if politics became necessary because they were deprived of what was theirs and thus consider themselves despoiled; then security and justice would seem to lie in reclaiming what was taken from them. After all, with everything restored, they have the means to ensure they won’t be molested.

The President’s victory last year spoke to that—large majority, I believe—portion of the political class and the public that views election as absolution. It closed the book on the past in many ways while opening a new one: and, like all sequels, this carries with it the risk of disappointing (and disappointment).

Can six years in power, be long enough for the Marcoses to achieve a resolution of what they, the Marcoses, had ensured would be unresolvable while they were out of it? Yes, if one abandons a fundamental assumption about the Marcoses in general and the President in particular as paladin of his clan: the assumption that being president-for-life is either attractive or necessary. Abandoning that (Marcosian, in the sense of Marcos Senior) assumption means many other things must fall by the wayside: a determination, much less a desire, to change the system not least to leave an indelible mark on institutions, for one; and that the incumbent president is imbued with a plodding, plotting deviousness and a colossal ambition to bend the nation to his will. Replace “Notes On The New Society” with a Beastie Boys manifesto, instead: “(You Gotta) Fight For Your Right (To Party).” With this as your mantra, the present makes sense, though it makes the future look disappointingly bland. Thirty years of fighting and that’s it? Your portrait on the wall after six years and the dockets cleared? But think about what achieving both will require.

Rizal once perorated on how “sympathetic currents pervade the air,” and there is no reason for the blessings of impartial justice to be denied the President and his family when the mere son of the secretary of justice was exonerated in a blaze of instant redemption, and when the mere ex-chief of staff of the chief presidential legal counsel secured her temporary liberty in a doctrinal redefining of the writ of habeas corpus hailed by lawyers from the ranks of the National Union of People’s Lawyers and the defense team of Leila de Lima. For the Supreme Court agreed with Gigi Reyes that she’d been denied a speedy trial, that as a result, her continuing detention was unjust, and in agreeing with her and ordering her release, the high court can be applied to other cases involving detention and confinement, furthermore voiding a Marcos-era precedent that denied the application of the writ to individuals already charged in court.

Won’t this glittering renaissance of renewed justice not apply in other ways to the First Family and friends, too? As the Manila slogan puts it, “the law applies to all, otherwise none at all.” In a sense, the hallmark of the Marcosian method when it comes to the law is the creative reinterpretation of the law and formerly sacrosanct precedents. The most recent offshoots of this judicial and legal creativity were the use of quo warranto proceedings against Chief Justice Maria Lourdes Sereno, and so on. The prophet of the new era was the current chief justice, Alexander Gesmundo, who’d told anyone who’d listen, last October, that Supreme Court decisions aren’t written in stone; that in a lofty sense, our high court, like the American one, can change perspective depending on its composition; that the call of the times can depend on the timing: “What is important are the issues being brought by the parties before the [Supreme Court]. Is it a question of constitutional rights blatantly violated? Then we have to take a second look,” he said then. From his quiet perch in the palace, his immediate predecessor, now the executive secretary, will probably sagely nod. Back then, reporters had been quizzing the chief on the question of the Marcos estate tax. Turns out, they’d received much more than a specific answer: they’d gotten a preview of legal reform. We must never forget what President Marcos (Senior) once said of we, the people: that we “will accept any kind of radical reform provided it is constitutional and legal.”