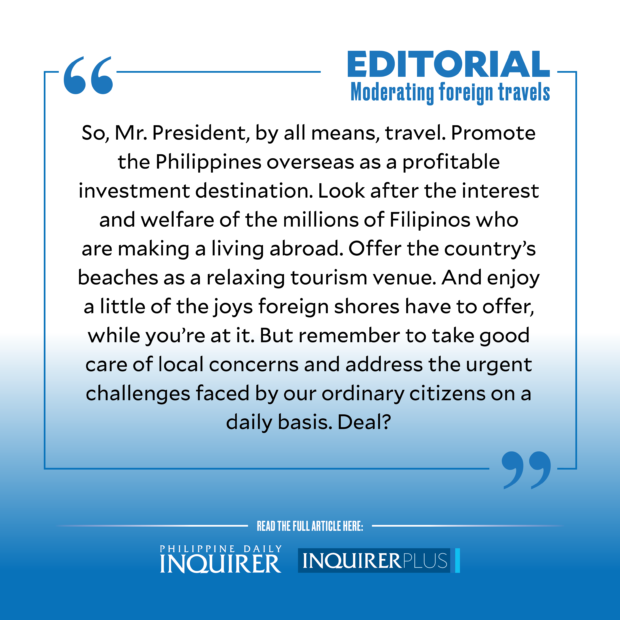 Eight foreign visits on official business, plus one personal trip to an international sporting event known to attract the rich and famous more than the everyman.

This is the travel record racked up by President Marcos Jr. in his first seven months in office—a tally that has been unprecedented in recent years, much less for a President that is leading the country through what is still a crisis situation caused by the lingering effects of the coronavirus pandemic.

Since taking his oath of office last June 30, 2022, the Chief Executive has been to Indonesia, Singapore, the United States, Cambodia, Thailand, Belgium, China, and Switzerland for a combination of state and official visits, and participation in international conferences.

He has been accompanied on these trips by the usual members of his official family, as well as private sector representatives—like the seven billionaires who joined him in Davos—to promote the country as an attractive site for foreign investments.

Given this juxtaposition, it is easy to criticize the Chief Executive for what, on the surface, looks like a waste of time and resources when there are ongoing domestic challenges that need to be addressed, like the stubbornly high inflation rate, which has moved from one basic commodity to another and made life more difficult for most citizens.

By the Palace’s official tally, the President has brought in investment pledges worth over P50 billion from these various trips, while sealing bilateral economic deals with other nations on at least three of these trips. That’s not something to scoff at, especially if even just a portion of these commitments materializes over the medium to long term, and result in the creation of more jobs for Filipinos.

But there is something to be said about the need for greater balance in the President’s priorities when it comes to governing this nation of 110 million people, all of whom are tugging government in one direction or another to address their priorities.

Let’s start with the two biggest crises the country is facing at present—the ongoing pandemic and the inflation crisis. Both can be handled better if there were permanent Cabinet heads appointed to the departments in charge of addressing these challenges.

For some unclear reason, however, the President has yet to appoint a permanent secretary of health, leaving a holdover officer in charge to run the day-to-day affairs of this important office, while designating himself as the interim secretary of agriculture.

And while the COVID-19 cases are on the wane, the damage it has caused on the country’s economy continues to be felt, most especially by consumers struggling daily with record high prices of, at first sugar, then followed by onions, and now eggs.

On top of this, there are hundreds, if not thousands, of daily matters that a president can only address effectively from behind a desk, paying close attention to staff briefings and carefully reading documents before signing them, rather than delegating too many of these tasks to subalterns. There is also merit in calls to trim down the President’s delegation to the barest minimum, as the 70-person delegation to the World Economic Forum in the Alpine resort town of Davos in Switzerland was said to have far exceeded the size of delegations from rich nations.

On the plus side of the President’s travels, it is true that one of the best ways to reintroduce the country’s new face to the rest of the world is by meeting the leaders of foreign governments face to face and firmly shaking the hands of prospective business partners in foreign capitals. This is made even more important by the fact that the country’s image overseas suffered during the six years of the previous administration, no thanks to the regular foul-mouthed pronouncements of our then head of state, not to mention the massive body count left behind by his bloody antidrug war.

Just as many Filipinos have felt the refreshing change with a president who speaks in complete sentences without the need for constant cussing and the occasional risqué joke, all of which have no place in presidential language, so do people overseas need to experience the same clean slate.

And, admittedly, such important changes have to be seen with one’s own eyes, heard in real time with one’s ears, and hands shaken in the flesh for one to determine if the country is truly back on the right path, especially with a foreign leader contemplating an alliance of interests or a businessman planning to commit billions of dollars of resources.

So, Mr. President, by all means, travel. Promote the Philippines overseas as a profitable investment destination. Look after the interest and welfare of the millions of Filipinos who are making a living abroad. Offer the country’s beaches as a relaxing tourism venue.

But remember to take good care of local concerns and address the urgent challenges faced by our ordinary citizens on a daily basis. Deal?