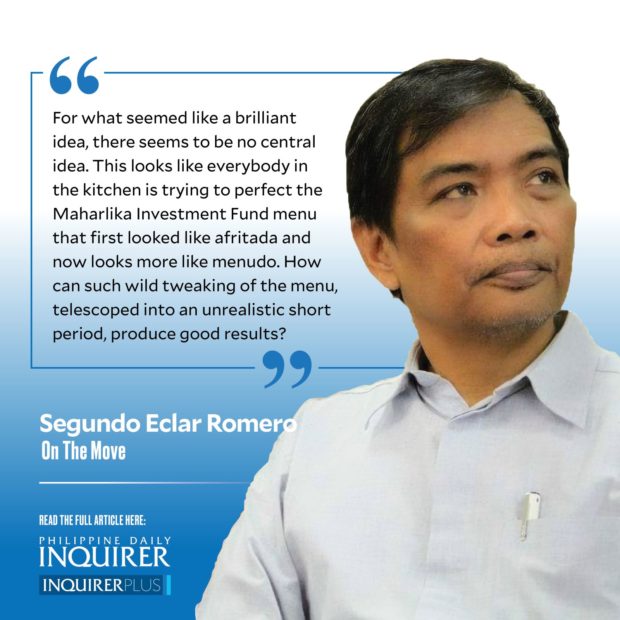 Albay Rep. Joey Salceda and three handpicked colleagues have been reengineering the Maharlika Investment Fund (MIF) bill that the House of Representatives passed last month. Such an unusual move speaks of the contortionist tactics needed to make the bill palatable to the public.

A significant redesign has happened. The source of funding has shifted less from government financial institutions to government-owned and -controlled corporations. The expected stream of funds will be securitized for marketability and transactability. Listing in the stock exchange suggests transparency and market discipline. The entry of private local and foreign investors will broaden the field of players and grow the fund. The shift in the composition of the management board from predominantly government to more private, autonomous professional members will quiet the fear of corruption.

For what seemed like a brilliant idea, there seems to be no central idea. This looks like everybody in the kitchen is trying to perfect the MIF menu that first looked like afritada and now looks more like menudo. How can such wild tweaking of the menu, telescoped into an unrealistic short period, produce good results?

No scenarios project the results of the alternative proposed features in the bill. No critical implications emerge from a desk sandbox process. No real pilot or prototype phase is planned to reveal how this MIF works out over time. No lessons-learned events are built into the law to make it flexible, responsive, and anticipatory of unforeseen conditions.

But opening the door to private local and international investors could be the real game-changer. The scuttlebutt among the cognoscenti in finance and business circles is that a one-time big-time money laundering effort is behind the MIF.

It is a remarkable coincidence that President Marcos Jr. has initiated the MIF idea and has already prematurely embarked on an international roadshow to promote the MIF within the first six months of his term.

Whatever the real motive for the MIF, some quarters suggest that perhaps Mr. Marcos, on behalf of the Filipino people, can remonstrate with the “anonymous” stewards of the plundered wealth—call it the Maharlika Gold—to “bring home the bacon” and invest these funds in the MIF.

Of course, legitimate business corporations all over the world are welcome to take advantage of this tremendous investment opportunity.

Even if the original plundered funds are never recovered, the funds can serve as a catalyst that jumpstarts and generates strategic opportunities that produce tangible dividends for the Filipino people. The MIF route might even be a better strategy than recovering the Maharlika Gold and putting it into the government general fund that is subject to the lascivious designs of politicians, which is why the MIF was thought of in the first place.

The fly in the ointment, of course, is the Philippines is committed to anti-corruption, transitory justice, the rule of law, good governance, and a rules-based international order. Much of the plundered funds stashed in various holding corporations abroad are still under the regulatory jurisdiction of foreign governments, as well as the international anti-money laundering regime and network.

But, remember that in the Philippines, a red traffic light is only a suggestion to stop. If there is a will, there is a way.

Will the Filipino people forget they were hapless victims of plunder in the past and now see themselves as hopeful beneficiaries of the MIF cornucopia in the future? The hidden message in the MIF might well be, take it or forget it. This may be the last time the Maharlika Gold may be sighted, ever.

But these wild imaginings of what the MIF is all about are encouraged by the uncharacteristic push for a nebulous idea that has split the nation’s top economists, finance wizards, and politicians. The nagging fear, furious as the redesign of the MIF might be as the frontispiece of Philippine development under the Marcos Jr. administration, is that in the end, the Filipino people might heave a sigh, “Ginto na, naging bato pa.” (What was gold still turned into stone.)