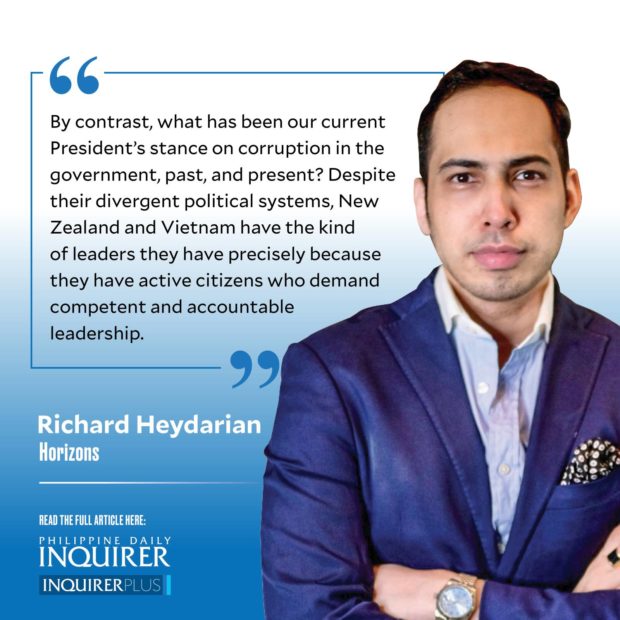 Apparently, watching “Ant-Man” wasn’t really the decisive factor. In his much-anticipated speech at the World Economic Forum in Davos, the poshest gathering of its kind amid the resplendent Alpine scenery, President Marcos Jr. invoked the specter of “survival” as his primary reason to enter politics.

“Why would I go into politics? My father has done everything in politics. Life is difficult, and I could see the sacrifices that they had to make, that he had to make to get to do a good job,” he said. “And for us to defend ourselves politically, somebody had to enter politics and be in the political arena … not only the legacy of my father but even our own survival required that somebody go into politics,” he added.

It was a kind of “explanation” that the well-informed audience in Davos may have found, to put it mildly, baffling. Davos was apparently also the platform to pitch the Marcoses’ new pet project, namely the controversial Maharlika Sovereign Investment Fund, which has yet to be fully approved by the Philippine legislature.

Apparently, the President also had a thing or two to say about the size of the Philippine delegation, among the biggest in the lavish confab. To put things into perspective, the United States, the world’s largest economy, only sent 19 representatives. As for India, with more than a billion population, it only sent seven representatives. The size of the Philippine delegation? Reportedly, at least 70 people!

“We tried to be complete. When is the next chance we will get to speak to CEOs of top Fortune 100 companies in the period of two days? So whoever we get to talk to [it’s necessary for the relevant secretary to be there to answer questions and talk to the prospective investors],” said the president in a press conference.

It goes without saying that what truly attracts high-quality investors is not meeting a presidential delegation in an Alpine resort per se, but instead actual investment conditions on the ground. For peer nations such as Vietnam, their leaders don’t have to attend Davos or travel more than once a month around the world to meet investors, because Fortune 500 companies come to them—not the other way around.

And speaking of Vietnam, which has been attracting multibillion-dollar manufacturing investments from top global companies in recent months, the ruling communist party recently ditched no less than the country’s president over corruption scandals. Vietnamese President Nguyen Xuan Phuc was forced to step down from office after his relatives were implicated in COVID-19 test kits corruption anomalies.

With Vietnam’s economic miracle creating a new gilded age of overnight billionaires, the ruling party is intent on containing corruption. If anything, Vietnamese leaders are implementing a new doctrine of “symbiotic relationship,” whereby, under the slogan of “leaving no one behind,” the tycoons are coaxed and cajoled to aid inclusive development, including the development of socialized housing for the less-privileged citizens.

By contrast, what has been our current President’s stance on corruption in the government, past, and present? And how much actual investments did former president Rodrigo Duterte’s whirlwind and expensive travels in the pre-pandemic years bring to the country?

Meanwhile, New Zealand, a liberal democracy, has also shown its own version of government accountability. Prime Minister Jacinda Ardern, a global icon who won an outright majority in the 2020 elections, has announced her resignation from office, because “you cannot and should not do the job unless you have a full tank, plus a bit in reserve for those unplanned and unexpected challenges.”

“I no longer have enough in the tank to do the job justice,” she added, emphasizing how true leadership is about all-consuming duty to the country—not to oneself or for the sake of a political dynasty’s political “survival” per se. Despite their divergent political systems, New Zealand and Vietnam have the kind of leaders they have precisely because they have active citizens who demand competent and accountable leadership.