The perennial problem of hunger 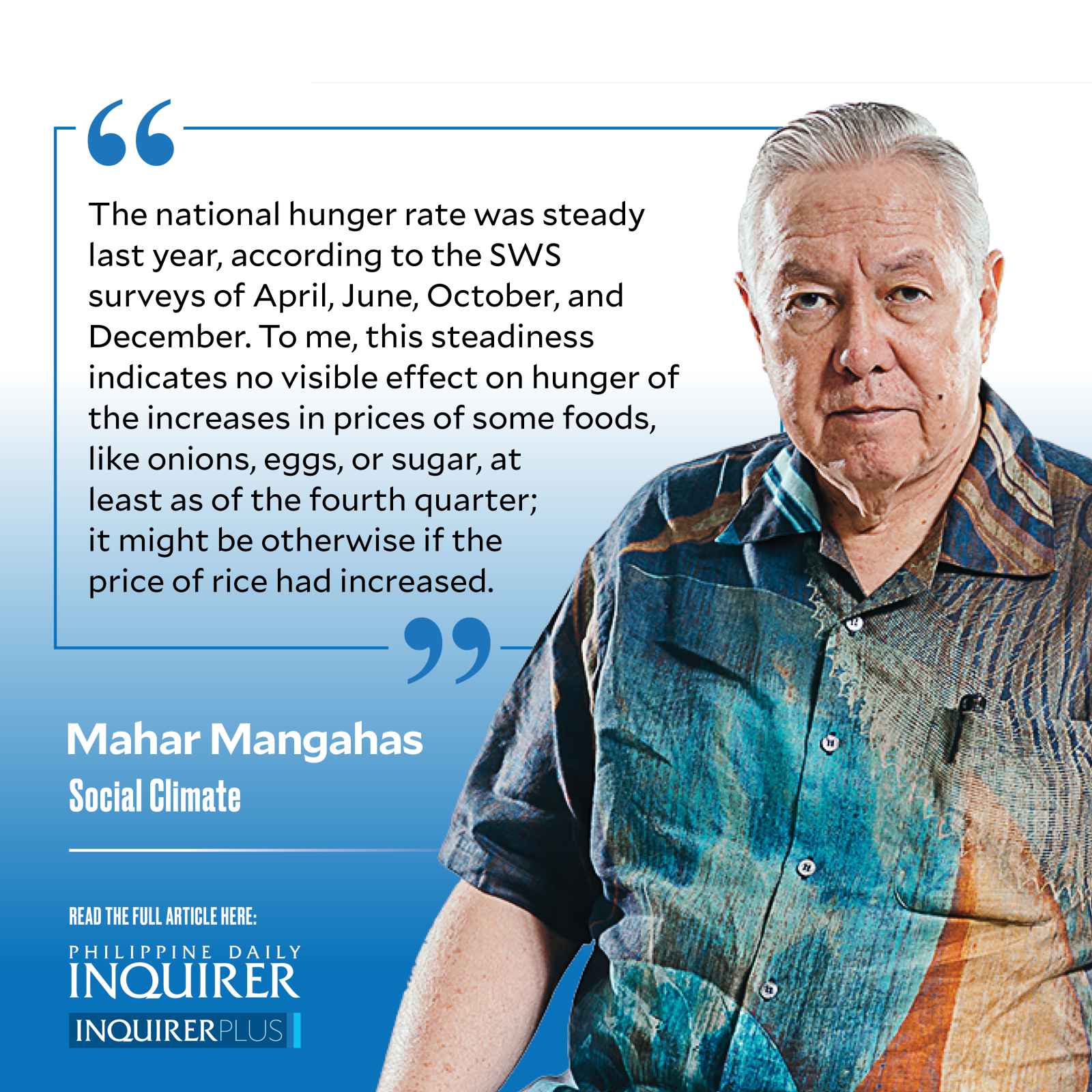 The national hunger rate was steady last year, according to the SWS surveys of April, June, October, and December. To me, this steadiness indicates no visible effect on hunger of the increases in prices of some foods, like onions, eggs, or sugar, at least as of the fourth quarter; it might be otherwise if the price of rice had increased.

What is new is that, for the first time after six quarters, the National Capital Region is no longer the hungriest of the four SWS survey areas (see “Prolonged hunger in NCR,” inquirer.net, 11/5/2022). The hungriest became Mindanao, followed by Visayas, at the end of 2022. Let us now see what 2023 will bring.

The average hunger rate in 2022 was slightly below 2021’s 13 percent, and far below 2020’s catastrophic 21 percent, the first pandemic year. It was almost, but not quite, a full recovery from the 9 percent hunger rate in pre-pandemic 2019.

A single-digit hunger rate is actually rare; this may be seen in the full data series in every SWS quarterly hunger report. It previously happened only twice: in 1999 (8 percent) and in 2003 (7 percent). Unlike poverty, hunger does not have a long-term downward trend. It remains a perennial problem.

Econometric modeling of hunger at the UP School of Statistics (UPSS). Using the SWS quarterly data, UPSS researchers Dennis S. Mapa, Fatima C. Han, and Kristina Claire O. Estrada showed that an increase in food prices in one quarter would raise hunger for five subsequent quarters, while an increase in underemployment would raise it for two quarters (“Hunger incidence in the Philippines: facts, determinants and challenges,” paper for a forum of the National Academy of Science and Technology, 2/10/2010).

I think the UPSS econometricians examined the gross domestic product and other potential determinants and found little correlation with them. I hope they will update their analysis with data after 2010, including the pandemic time. (Mapa has been head of the Philippine Statistics Authority since 2019, by the way.)

The drastic effect of the pandemic. In the first year of the pandemic, the hunger percentage zoomed to 17 in May, 21 in July, and 31 in September—when hungry families were 28 percent in the National Capital Region, 24 percent in Balance Luzon, 41 percent in Visayas, and 38 percent in Mindanao—before dropping to 16 in November.

In 2020, hunger averaged 21 percent, a new annual peak. I see the mushrooming of community pantries as a systemic response of Filipino society to the intense suffering that finally became obvious to all.

Hunger is an embarrassing subject. Whereas the government now has monthly surveys on unemployment and underemployment and has promised to update its poverty figures every two years, instead of every three, it has hardly any numbers on hunger.

The latest government hunger report I could find is for reference year 2011, which happens to be the peak of the hunger hump as reckoned by SWS. The report said that 6.3 percent of families in the nation had experienced hunger in the past three months. It had hunger rates for 17 regions, including NCR (2.7 percent), Cordillera (the least hungry, 0.3 percent), and 15 others. The regions with double-digit percentages were Eastern Visayas (16.2), Northern Mindanao (10.1), SOCCSKARGEN (13.0), and Caraga (11.7).

For the past dozen years now, the government has not surveyed hunger. The target date for Zero Hunger (United Nations Sustainable Development Goal No. 2) is 2030, only seven years away. Does the government expect to achieve it by then?