The preponderance of privilege | Inquirer Opinion

The preponderance of privilege 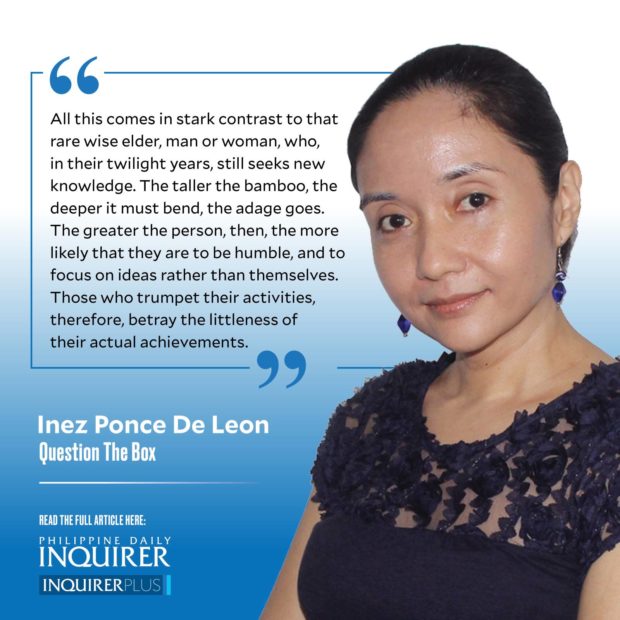 I always open my undergraduate research class with paradigms, or the lenses that guide how we can see reality in different ways. Critical Theory is my absolute favorite.

I ask students to fill in the blanks: “Look at BLANK, they’re BLANK when they should be BLANK.”

The exercise helps students identify the limits placed by society, which then allows them to question why such limits are in place, and why these limits are taken for granted (hence, they question the box). This brings home Critical Theory as a way to view reality: What we think is real is actually ideology, pushed upon us by those who wish to retain power.

Last semester, however, it took the class much longer to fill in the blanks with the most obvious answer: Look at women, they’re at the workplace when they should be at home. When the students finally got it, I wrote their words on board with bravado.

One student remarked, “Do we need to be mad?”

I wondered at the question, for, indeed, critical thinking demands righteous anger at the structures that bind and deceive us, at the privilege that purports to sustain society but actually destroys it from within.

My fellow columnist, Anna Cristina Tuazon, put it succinctly in her recent column: It is not only the privilege that is offensive, but the refusal of some public figures to acknowledge that their privileged position also gives them an edge, that their struggles are not equal to those who were not born into fortune.

I hope the events of these last few weeks have brought home that message to my students. The online influencer who told people to be thankful for their jobs and not complain. The snobs who bashed a young Filipino who showed off her father’s gift, a Charles and Keith bag, and called it a luxury item.

And of course: male privilege. As with riches, it can constitute the refusal of males to acknowledge that they hold a privileged position, and that many of our laws and customs work against the advancement of women. Some of these notions about what men and women can or cannot do are often so deeply ingrained, they are hardly questioned.

A recent example: Andrew Tate, former kickboxer and self-proclaimed alpha male, showed off his cars on Twitter and taunted Greta Thunberg by offering to send her details about their carbon emissions. She tersely responded that he could enlighten her by sending her an email at smalld*[email protected]

Tate promptly ranted on a video online, forgetting that his pizza box, showing a Romanian pizza brand, was visible enough to give away his location. Within hours, Romanian police swooped in and detained him on several outstanding charges, including abuse, rape, and human trafficking. For days, some people berated Greta for her supposedly foul mouth, even as she had simply thrown Tate’s coarseness back at him and his followers.

Male privilege need not be so high profile. For every Greta who makes the headlines for her virtual slap of a tiny, tiny man, we have the everyday experiences of women who have to deal with men who justify their actions by puffing out their chests rather than admitting to wrongdoing or ignorance, aka mansplaining. Examples: My clients are international, so your complaints about my services are invalid. I’ve debated with lawyers, so your opinion is wrong.

Mansplaining tries to minimize mistakes by magnifying one’s imagined greatness, with greatness being defined as a wide social network, an ability to pick up and spout back gossip, or a bank account. This seems to reflect a confusion among so-called alpha males, who mix the idea of greatness with size: The greater the wealth being broadcasted, the greater the person.

All this comes in stark contrast to that rare wise elder, man or woman, who, in their twilight years, still seeks new knowledge. The taller the bamboo, the deeper it must bend, the adage goes. The greater the person, then, the more likely that they are to be humble, and to focus on ideas rather than themselves. Those who trumpet their activities, therefore, betray the littleness of their actual achievements.

All this comes in stark contrast, too, to the end of January: the feast of the Holy Child Jesus, a little boy with none of the world’s privilege, and all the power that we can neither fathom nor acquire in our poor definition of greatness.