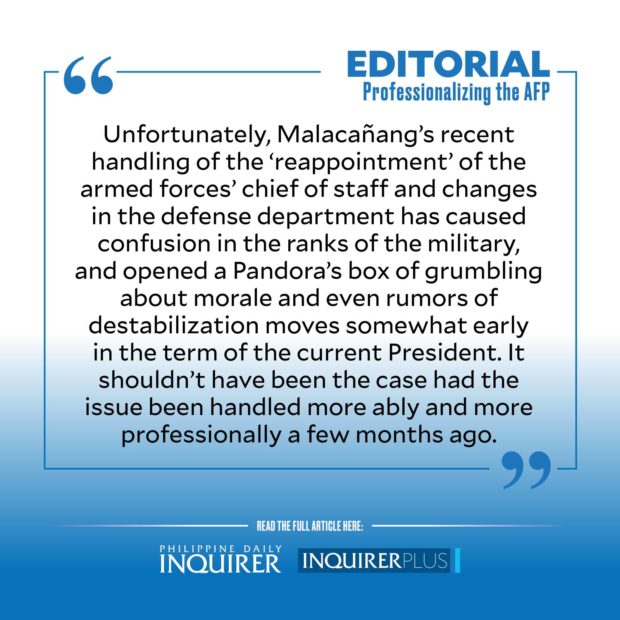 The Armed Forces of the Philippines is the protector of the people and the state.”

Thus says Article II, Section 3 of the 1987 Constitution in defining the role of the military in Filipino society, explaining that the institution’s main role is “to secure the sovereignty of the state and the integrity of the national territory.”

It goes without saying that, for the AFP to be able to perform its mandated role, policymakers and stakeholders have to ensure that the military establishment remains strong, not only in terms of manpower and matériel but, perhaps more importantly, in terms of leadership, too.

To this end, it is absolutely important that our President appoints not only the right people to lead the Philippines’ uniformed men and women, but also to appoint them in a manner that inspires confidence among the troops that their Commander in Chief knows what he is doing and has the best interests of the institution and country in mind.

Unfortunately, Malacañang’s recent handling of the “reappointment” of the armed forces’ chief of staff and changes in the defense department has caused confusion in the ranks of the military, and opened a Pandora’s box of grumbling about morale and even rumors of destabilization moves somewhat early in the term of the current President.

It shouldn’t have been the case had the issue been handled more ably and more professionally a few months ago.

The current AFP chief of staff, Gen. Andres Centino, was appointed by President Duterte in late 2021. He was not due to retire until next month. But President Marcos Jr. replaced him last August with Lt. Gen. Bartolome Bacarro—an ill-advised decision, as it turned out, with his move to reappoint Centino earlier this month.

Former senator Panfilo Lacson, who had previously coauthored and sponsored a law granting fixed terms to the country’s military head, described Mr. Marcos’ move as “righting a mistake.” Indeed, it was. But the Philippines cannot afford mistakes like this when the stakes are this high.

Of course, that very same part of the Constitution stresses that “civilian authority is, at all times, supreme over the military.” In fact, this is the key premise of the entire section. As such, it is completely within the President’s prerogative to appoint the person he deems most fit—as long as they are qualified—to lead the country’s military establishment.

But that prerogative has to be exercised delicately and with deftness, and not be wielded so casually, given the country’s long history of having a politicized armed forces.

It is absolutely critical for Mr. Marcos to fully embrace the implementation of Republic Act No. 11709 enacted by the previous administration only last April 2022, which mandates a fixed three-year term for all AFP chiefs of staff and other key military officers.

Similarly, our lawmakers should spend their energies on more urgent economic woes rather than amending the fixed-term law for AFP officers which has not even been implemented yet.

This law aims primarily to further professionalize the armed forces by ending the so-called “revolving door” appointment policy for chiefs of staff, which sometimes saw the country’s highest ranking military commander serving ridiculously short terms of office. In fact, one duly appointed and confirmed chief of staff served for only 79 days a few years ago, with less than three months in between the ceremonies for him to accept and relinquish his command.

And while we’re at it, our leadership should reconsider this habit of appointing generals to key civilian posts. It is clear why it is tempting to appoint people who spent their entire careers taking, giving, and executing orders to run government departments, agencies, and offices, especially when the organization is facing operational challenges. There is no empirical proof that military men make better managers than professional civilian leaders. But there is ample anecdotal evidence that military men often find themselves hobbled when having to struggle with organizations whose hidebound bureaucracies do not jump to attention when orders are issued.

As for the AFP, a revolving door policy—which the recent chief of staff reshuffle reminded us of—is no way to build a professional organization, much less one charged with a role as critical as defending the country from foreign and domestic threats.

Mr. Marcos should learn from this early hiccup and ensure that all his future appointments, whether they be for military or civilian posts, be based mainly on merit, and not only seniority, or worse, unvetted recommendations by close advisers.

It takes years for reform and other and meaningful changes to take root. Adhering to the letter and spirit of RA 11709 is one way that the AFP can professionalize its ranks and ably perform its mission of being the protector of the people and the state.