No-fly zone for planes and experts 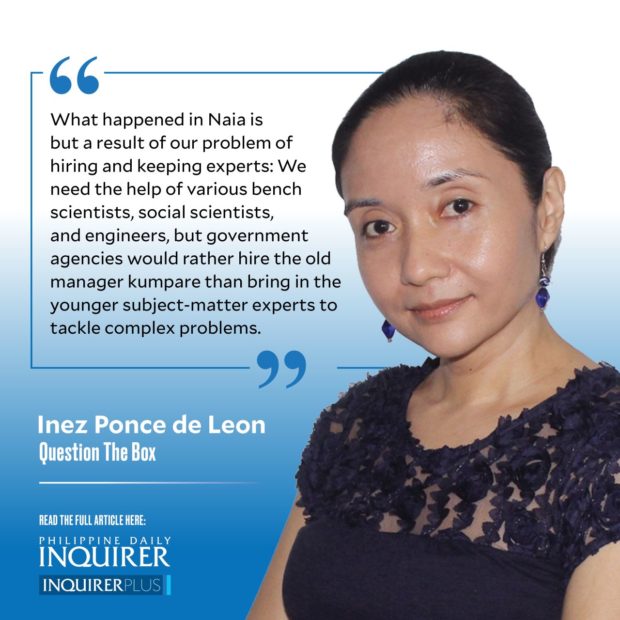 A few weeks ago, I met again with one of my readers, Sister Jean. She explained that I had gotten information about her wrong in a previous column, and it was worrying her.

She did not live among the poor, but was simply someone who had been raised to love them, and therefore dedicated her life to helping them. She did not think herself special or extraordinary, and blushed when I said that her wealth of experience and depth of insight had made me think (and write) otherwise. I apologized to her, and I do apologize to all my readers who might have misconstrued how I wrote about such a gracious woman (though she laughs and brushes me off whenever I tell her so!).

As with any meeting with Sister Jean, something mind shaking will always come up. Our talk that day eventually turned to the concept of ignorance, which has become rampant, even heralded in both government and its rabid followers. The ignorance Sister Jean spoke of was the unwillingness to confess to wrongdoing, or to admit that one does not have enough information, and therefore needs the help of experts.

To admit wrongdoing is a selfless act: It is an emptying of oneself so that one can learn. To forcefully retain one’s ignorance is selfishness: It is self-assurance, arrogance, a wish to adhere to old habits to save face.

In July 2022, a critical bill was vetoed at the level of Malacañang. It would have created the Philippine Transportation Safety Board, a nonregulatory entity not unlike the US NTSB. The board would have worked on harmonizing public transportation, investigating transport mishaps, working with academe and industry experts, and recommending new mechanisms to improve transport. The creation of such a board acknowledged that the government needed to hire and care for experts to tackle a multipronged problem.

Months later, traffic snarled up our streets, prompting recommendations to resurrect the bus rapid transit project, an upgrade to our rail systems, anything to move people. In response, the trolls called for diskarte, and focused on moving cars, while pinning the blame on commuters.

And then, days ago, the Naia fiasco. The accounts on its cause vary: There was a power disruption, though the electricity providers say otherwise; the systems were faulty and outdated; there was much outside of anyone’s control. The air traffic controllers had to manually hook up equipment and call out vectors to pilots on the radio, if only to land planes safely while troubleshooting happened on the ground. For hours, Philippine airspace became a no-fly zone.

It took hours for anyone to sincerely say, “I’m sorry,” but it was much faster for the trolls to come to the rescue and blame the opposition, complaining “Kakampinks,” and previous administrations for the mishap.

What happened in Naia is but a result of our problem of hiring and keeping experts: We need the help of various bench scientists, social scientists, and engineers, but government agencies would rather hire the old manager kumpare than bring in the younger subject-matter experts to tackle complex problems.

The government takes the fast but least effective route to get a job done, only to moan when our brightest minds go abroad, to places where people willingly invest in them rather than expect them to survive in hastily made infrastructure where needs are met at the speed of drunken snails crawling through peanut butter.

We can’t call back our experts with the promise of high salaries alone, when they have to work within government bureaucracies that have no respect for expertise, make citizens fend for themselves, and seek places to lay blame so that the government can claim lack of control when things go awry.

The government might not have a problem with willing ignorance alone—its problem is that of a warped sense of expertise, a lack of long-term vision, and a focus on who can please the privileged few rather than uplift the disadvantaged many.