An end to armed conflict? 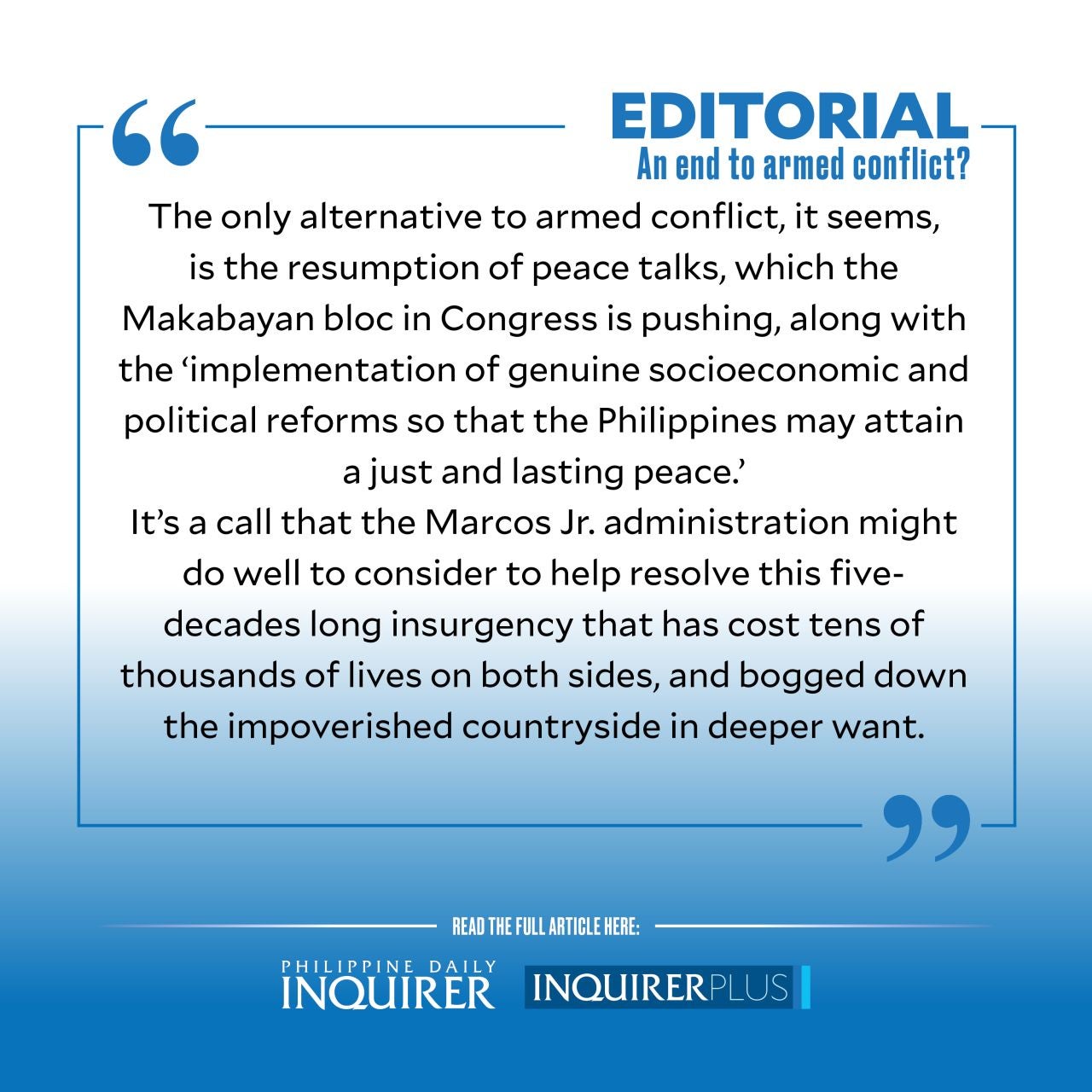 Will the death last week of Jose Maria Sison, the founding chair of the Communist Party of the Philippines (CPP) and its armed wing the New People’s Army (NPA), finally put an end to the country’s long-running insurgency problem?

Sison died Friday, reportedly of heart failure, after weeks of hospital confinement in The Netherlands where he has lived in self-exile since 1987. He was 83.

His death, the Department of National Defense (DND) crowed, marks the end of the “greatest stumbling block to peace.” It is also symbolic of the “crumbling hierarchy” of the Philippine communist movement, the DND statement added, referring to the CPP-NPA and its political arm, the National Democratic Front of the Philippines (NDFP).

Sison, a former youth leader and university professor, founded in 1968 the Marxist-Lennist-Maoist CPP, a breakaway party from the pro-Soviet Partido Komunista ng Pilipinas. A year later, he established the NPA which followed Mao Zedong’s “protracted people’s war” strategy of surrounding the cities from the countryside.

At its peak during the martial law years, the NPA had 25,000 Red fighters, according to military estimates. Last month, Armed Forces of the Philippines Chief of Staff Lt. Gen. Bartolome Vicente Bacarro said its force has since dwindled to 24 guerilla fronts with “more or less” 2,100 active fighters.

Despite failed peace negotiations between previous administrations and the CPP-NDFP, AFP spokesperson Col. Medel Aguilar said it hopes Sison’s successor would “chart a new direction in promoting reforms. Hopefully, away from armed struggle.”

It’s a remote possibility, however, for Sison’s comrades in the CPP and NDFP, who have already expressed “determination to carry the revolution forward,” and announced that there would be no Christmas ceasefire this year.

Given the country’s political dynamics, the AFP’s optimistic scenario is, at best, wishful thinking, and, at worse, naivete. Because, as political analyst Gabriel Jose Honrada wrote for an online news outlet, “While the Philippine government views the CPP-NPA as a threat that must be eliminated, a more cynical view is that [it is allowed] to exist to preserve the status quo. It has paradoxically evolved from being an anomaly to a necessary ingredient in Philippine power politics.”

Honrada added: “In current Philippine political dynamics, the CPP-NPA has become a scapegoat for the government, a means to keep the military relevant and away from politics, and a trap to stifle the formation of more viable movements for social change.”

Indeed, how many times has the Red bogey been hoisted to justify a bigger budget, more arms, and munitions for the military and paramilitary groups? The most recent case is the P10-billion restored budget of the government’s National Task Force to End Local Communist Armed Conflict (NTF-Elcac), which Congress had initially cut in half because of the task force’s failure to identify the projects to be funded, and its inability (or refusal?) to submit reports on its past accomplishments.

Instead of fulfilling its mandate to initiate development projects in barangays cleared of NPA influence, the NTF-Elcac has been Red-tagging activists, outspoken celebrities, lawyers, and judges in a vicious witch hunt that has resulted in arbitrary arrests and detention, false charges, and even the death of those who “had fought back” against the raiding team.

The same threat of having “communist terrorists” amongst us led to the passage of the anti-terrorism law and the stifling of dissent, as vocal opposition groups, including religious missionaries, are Red-tagged and surveilled, their assets frozen in accordance with the law.

But power play aside, Sison’s death is not about to end the world’s longest-running armed conflict, according to Hernani Braganza, who was once part of the government’s peace panel. The CPP, Braganza pointed out, “is not based on personalities,” so one man’s death won’t lead to the party’s collapse, but may even result in the rise of younger leaders.

More crucially, Braganza said, the insurgency will persist as long as the reasons for the CPP’s existence remain, among them poverty, social injustice, and land ownership issues that center on unequal access to agricultural wealth and resources.

“Land is a major component of insurgency,” added Braganza, who headed the Department of Agrarian Reform in the early 2000s. Even peace talks, he noted, must include agreements on the major components of economic reforms, such as agrarian reform and industrialization.

The only alternative to armed conflict, it seems, is the resumption of peace talks, which the Makabayan bloc in Congress is pushing, along with the “implementation of genuine socioeconomic and political reforms so that the Philippines may attain a just and lasting peace.”

It’s a call that the Marcos Jr. administration might do well to consider to help resolve this five-decades long insurgency that has cost tens of thousands of lives on both sides, and bogged down the impoverished countryside in deeper want.

In his speech at the AFP anniversary on Monday, the President stressed that his “marching guidance” to the military is to “commit to the cause of peace.” He might have been referring to the territorial dispute in the West Philippine Sea, but the prospect of peace within our shores is one he should focus on as well.