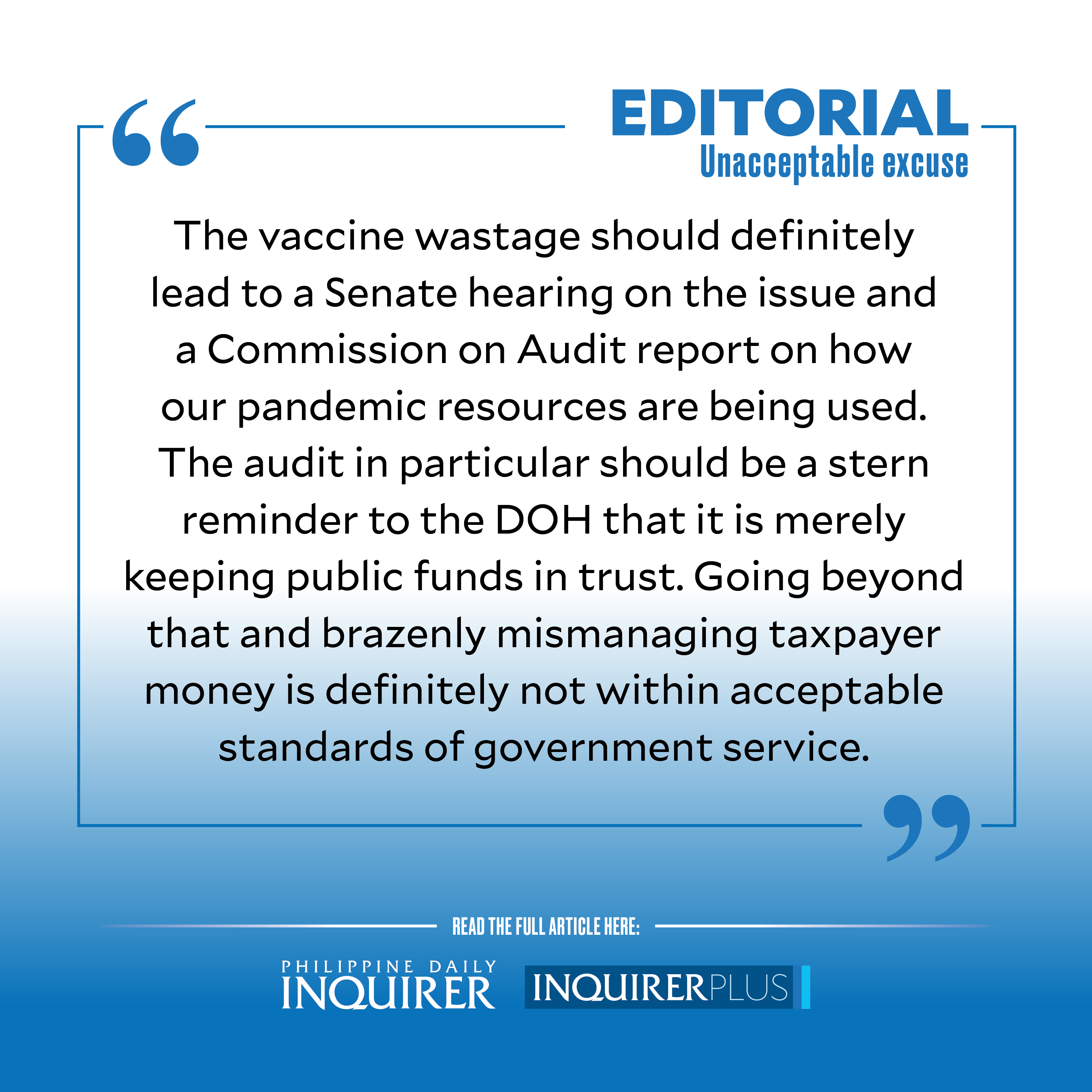 The Department of Health (DOH) has shrugged off the wastage of some P15.6-billion worth of COVID-19 vaccines, saying this was well within the acceptable threshold of vaccine wastage set by the World Health Organization (WHO). The 31.3 million doses of expired or spoiled vaccines represent only 12.5 percent of the total 250.38 million vaccine doses received or procured by the Philippines, DOH officer in charge Ma. Rosario Vergeire said in a press conference last week.

She added: “The WHO specifically said that because of the evolving nature of the pandemic, (the level of wastage that is acceptable) is around 25 to 30 percent.”

The world health body had earlier set the threshold for vaccine wastage at 10 percent, but Sen. Pia Cayetano noted in a plenary session on the proposed 2023 national budget that the WHO found “[from its] experience in low-income, middle-income, and even high-income countries [that] wastage rates went up to 30 percent … [which is not] an excuse, but just showing the trends and realities,” she added.

Among the causes cited behind the wastage were the short life span of the stocks, natural disasters, temperature excursions, discoloration, and particulate matter.

That some of these factors may be beyond DOH control is understandable, but the agency’s callous disregard for the billions of pesos lost in scarce pandemic funds and much-needed COVID-19 vaccines is unacceptable, and betrays the appalling mismanagement of basic pandemic response by government bodies tasked to handle it: the DOH, the Health Technology Assessment Council, and the Inter-Agency Task Force for the Management of Emerging Infectious Diseases.

Worse is the DOH’s proprietorial attitude toward public funds sourced from taxpayers who were doubly defrauded in this instance, their hard-earned money dribbling down the drain and their health risks multiplied by the loss of vaccines—computed at P500 per dose—that more people could have availed of.

Saying that the WHO-led COVAX would replace at least 10.5 million doses of the wasted vaccine stock does not wash either. As Sen. Risa Hontiveros pointed out, the DOH had reported in August a vaccine wastage of 20.6 million doses worth some P10.33 billion. The figure had ballooned by November, with the DOH belatedly discovering more expired vaccines in some forgotten warehouses. So where’s the due diligence after all that fanfare that greeted the arrival of every batch of vaccines?

And having discovered the rotting vaccines months back, was nothing done to prevent more loss? Couldn’t the DOH and other pandemic bodies have mitigated the situation—secured more reliable refrigeration units, set up monitoring standards for fluctuating temperatures, employed alternative power sources, ramped up the information drive on vaccine efficacy to get more people to have their shots, used more logistics companies to bring more vaccines where they were needed … the list goes on. After all, it doesn’t take genius to learn from experience, especially if the lesson costs billions.

It’s not as if we lacked funds to do all these, having resorted to borrowings to shore up our pandemic resources which then raised the country’s debt stock from P9 trillion pre-pandemic, to a record-high P12 trillion as of February 2022, according to former Senate minority leader Franklin Drilon.

In fact, we may have been so awash with pandemic funds that the DOH under then Secretary Francisco Duque III thought nothing of transferring P42 billion to the Procurement Service of the Department of Budget and Management, which went to an anomalous deal in shoddy but overpriced pandemic supplies with the undercapitalized Pharmally firm.

But Go Negosyo founder Joey Concepcion disputed Vergeire’s claims and showed tallies of its vaccine inventory, noting that only 9.39 million vaccines doses of the total 23.5 million doses that the private sector had secured through a tripartite agreement with government and vaccine manufacturers have expired. The figure includes the 2.83 million doses it donated to local governments.

It was Concepcion who earlier sounded the alarm over the expiring vaccines and urgently called on the government to step up efforts to get more Filipinos vaccinated. The DOH data as of April 2022 showed that 66.2 million Filipinos had already been fully vaccinated, but only 12.2 million out of the 46.8 million eligible for booster shots got them.

The vaccine wastage should definitely lead to a Senate hearing on the issue and a Commission on Audit report on how our pandemic resources are being used. The audit in particular should be a stern reminder to the DOH that it is merely keeping public funds in trust. Going beyond that and brazenly mismanaging taxpayer money is definitely not within acceptable standards of government service.