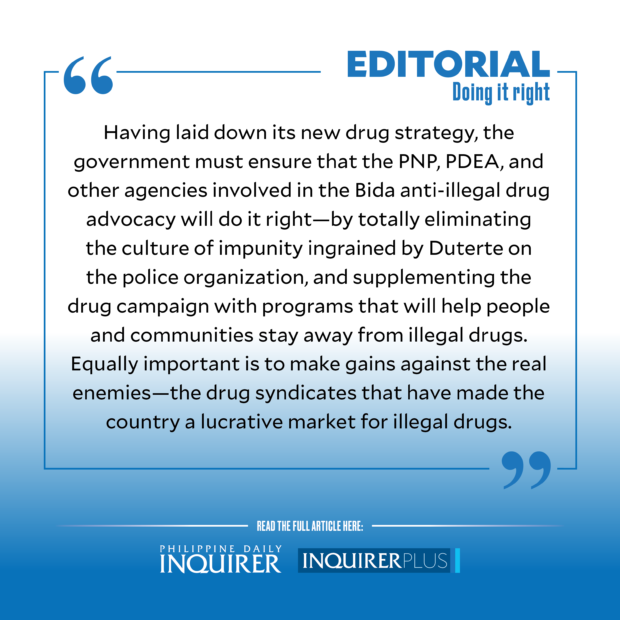 Some 25,000 people were reported to have attended the launch on Saturday of “Buhay Ingatan, Droga’y Ayawan” or Bida at the Quezon Memorial Circle in Quezon City, with similar events held simultaneously at the Cebu Plaza Independencia in Cebu City, Xavier Ateneo Sports Centre in Cagayan de Oro City, and People’s Park in Davao City.

Such fanfare might be necessary to herald the new government’s anti-illegal drug campaign, which promises to be starkly different from the bloody drug war under the Duterte administration that had resulted in thousands of what rights groups have described as extrajudicial killings.

Bida, according to Interior Secretary Benhur Abalos who led the nationwide launch, “pioneers a different approach that will work within the framework of the law and with respect for human rights and with focus on rehabilitation and socioeconomic development.”

To get to the root of the drug problem, Abalos said the Bida campaign must involve national government agencies, local government units (LGUs), and various sectors of society including barangays, schools, the religious sector, and families.

“We cannot put the campaign against illegal drugs fully [in] the hands of the Philippine National Police and the Philippine Drug Enforcement Agency (PDEA) because all of us are affected here. We all need to take part in putting a stop to this plague that is destroying our young people,” said Abalos.

He said the program will use the best practices of LGUs and government agencies to strengthen the implementation of drug-reduction activities, encourage multisectoral participation, and raise awareness on the dangers of illegal drugs through an information and education campaign.

The chief of the Department of the Interior and Local Government, which will implement the Bida program, issued Memorandum Circular No. 2022-141 asking local chief executives to formulate their antidrug plans within their first 200 days in office, with specific activities based on the drug situation in their localities.

Abalos, however, warned that the government will still crack down on drug users and traffickers, promising to fill jails with them. “To the drug pushers: we will send you to jail. We will enforce the law and fill the jails with the likes of you who destroy the future of our youth and families,” he said.

While this bombastic statement conjures a problematic scenario for the country’s severely congested jails, this is still a much-preferred option to the Duterte “kill them all” policy toward drug users and pushers. The thought of drug addicts in jail is infinitely better than knowing that suspects had been shot in some dark alley or dumped in vacant lots. At the end of the Duterte drug war, the police has acknowledged the death of some 8,000 drug suspects who allegedly fought back against operatives. Rights groups however put the drug war death toll at no less than 30,000.

Only two convictions have resulted from all these cases so far.

On Nov. 10, the Caloocan City Regional Trial Court Branch (RTC) 122 handed down a guilty verdict against Caloocan police officers involved in the torture of and planting of drug evidence against Carl Arnaiz, 19, and Reynaldo “Kulot” de Guzman, 14, who went missing on Aug. 17, 2017. Arnaiz’s body was found to have deep abrasions and marks from being handcuffed, dragged, and severely beaten. De Guzman’s body was fished out of a creek in Gapan, Nueva Ecija, with his head wrapped in packing tape and his body found to have 25 stab wounds.

Aurora Parong, cochair of the Philippine Coalition for the International Criminal Court, said the recent criminal conviction was a “welcome development amidst impunity, but we are not satisfied,” as this was only a drop in the bucket.

Still and all, “[the conviction] affirms the hope that, no matter how long it takes, justice can still happen, [and] accountability is still possible,” noted Human Rights Watch senior researcher Carlos Conde.

Indeed, with Duterte out and his kill policy repudiated by the new administration, there is hope that the courts will now be more free, independent, and intrepid enough in pursuing justice for the thousands of mostly poor victims of the Duterte drug war. The Marcos Jr. administration has the moral responsibility to ensure that these cases are prosecuted to the fullest extent of the law, and that the investigation by the International Criminal Court proceeds unimpeded.

Having laid down its new drug strategy, the government must ensure that the PNP, PDEA, and other agencies involved in the Bida anti-illegal drug advocacy will do it right—by totally eliminating the culture of impunity ingrained by Duterte on the police organization, and supplementing the drug campaign with programs that will help people and communities stay away from illegal drugs. Equally important is to make gains against the real enemies—the drug syndicates that have made the country a lucrative market for illegal drugs.