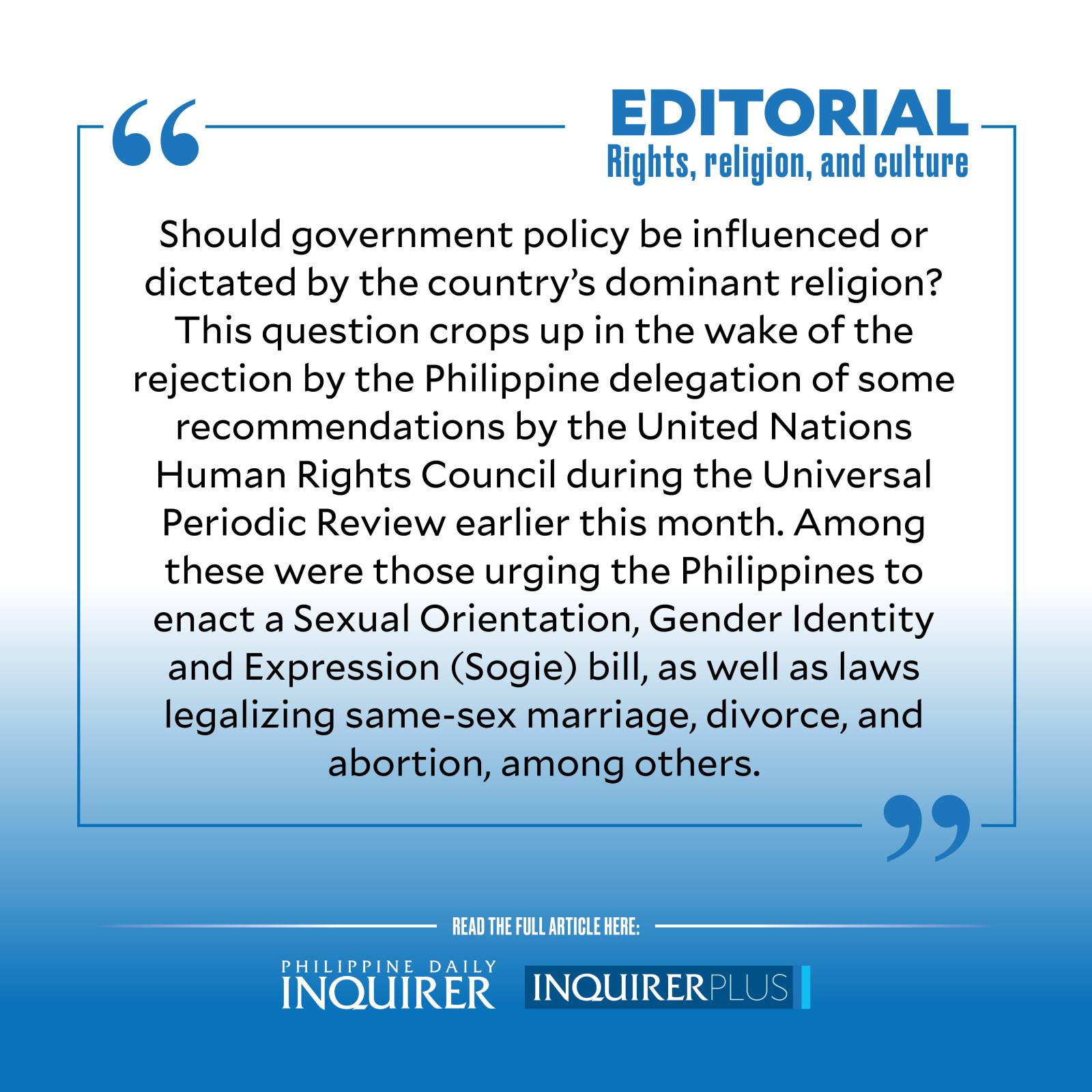 Should government policy be influenced or dictated by the country’s dominant religion?

This question crops up in the wake of the rejection by the Philippine delegation of some recommendations by the United Nations Human Rights Council (UNHRC) during the Universal Periodic Review earlier this month.

Among these were those urging the Philippines to enact a Sexual Orientation, Gender Identity and Expression (Sogie) bill, as well as laws legalizing same-sex marriage, divorce, and abortion, among others.

Justice Secretary Jesus Crispin Remulla, who headed the country’s delegation, said in a radio program here that they “rejected outright” such recommendations as these were “not acceptable” in a predominantly Catholic nation like the Philippines.

On another occasion soon after his arrival, Remulla explained that the rejected recommendations went against “our national identity, our religious beliefs, and our cultural traditions and (Philippine) sovereignty.”

Speaking of the Sogie bill and allowing same-sex marriage, Remulla said that the country is “not ready for that. Culturally, our values may conflict with many of the values that they want to impose upon us.” The justice chief made a similar remark regarding abortion, describing it as “culturally reprehensible,” adding that he doesn’t think “we are ready for the idea of over-the-counter abortion.”

Remulla’s remarks were enough to provoke the Commission on Human Rights (CHR) into asking the government to reconsider its stand, saying that if the Sogie Equality bill becomes a law, it will “ensure that every individual is free from threats and harm, and is treated equally.”

The CHR urged that government reconsider its stand “given that the 1987 Constitution mandates the State to value the dignity of every human person and thereby guarantee full respect for human rights as well as to provide to all persons the equal protection of laws.”

Rights to equality and nondiscrimination on the basis of sexual orientation, said the CHR, are “also entrenched in international human rights obligations in which the Philippines is a state party.” The Commission also said that it would be willing to conduct a dialogue “to address misconceptions about the wisdom and rationale of the Sogie Equality bill and similar proposals.”

For one, it pointed out that the Sogie bill in its present form does not contain any provision on same-sex civil unions, instead it simply “protects all and every person who may be discriminated (against) for their perceived sexual orientation and gender identity and expression.”

“It does not grant special rights to the LGBTQI community,” the CHR added. The bill, it explained, seeks to ensure that LGBTQI community will be able to enjoy the same rights as other members of society.

Remulla’s intransigence regarding the need to expand the rights of members of the LGBTQI community is puzzling given that in 2018, when he was governor of Cavite, he signed a provincial ordinance guaranteeing protection and recognition to the LGBTQI community.

A report says the ordinance was a response to the “steady and alarming rise in violence on LGBTQ members, as recorded over the past 15 years, and a way to support the pending Sogie bill.”

For instance, the ordinance considers it unlawful to discriminate against any person and/or group of persons on the basis of their sexual orientation and gender identity and expression or those who belong to the LGBTQI community. Considered discriminatory are “denying them access to and/or the use of private and public establishments, facilities, utilities, transportation and services, including housing, which is open to the general public.”

Given that such an ordinance guaranteeing protection and recognition to LGBTQI members falls short of recognizing their full human rights, including lawful marriage, surely before signing the ordinance Remulla would have studied and agreed with findings that the LGBTQI community were being unfairly discriminated against and their rights routinely violated.

Why couldn’t he have brought his learnings from his previous decision to sign the ordinance to understanding the roots of injustice and inhumanity when time came for the UNHRC review?

Was his very loud and firm rejection of LGBTQI rights in Geneva an about-face from the position he took as governor of Cavite or a way of courting conservative elements—the Catholic hierarchy, particularly? Notwithstanding this setback to the LGBTQI’s fight for their rights, the legislative branch has the task and wisdom to enact more responsive measures that fulfill the constitutional mandate to accord every citizen equal protection under our laws.