Human rights for all, not just for some | Inquirer Opinion

Human rights for all, not just for some 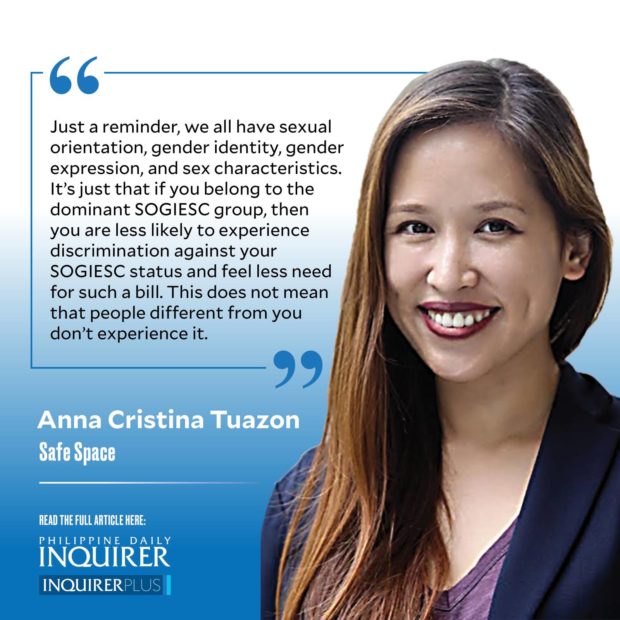 The Philippines underwent the United Nations Human Rights Council’s Universal Periodic Review in Geneva last week in which the UNHRC made 289 recommendations, including passing measures to protect the LGBTQIA+ community. While the administration had agreed to follow 200 of these recommendations, it rejected calls to push for legislation on gender identity and same-sex marriage as such bills were “not acceptable” in the Philippines as a “predominantly Catholic country.”

The outright dismissal of human rights for any sector of our society based on generalized, black-and-white descriptions of Filipino culture is a grave disservice. By definition, human rights are inviolable and dismissal of it on any grounds is already an injustice. If there must be an argument as to whether protection from discrimination is considered a human right, then it at least deserves much serious thought and discussion. Moreover, as public servants, they are tasked to care for all their constituents, including marginalized sectors. The response that certain bills will be rejected due to Catholic beliefs betrays favoritism for one sector over the other, despite our country having a diversity of religious affiliations. Even within the Catholic community, there are dynamic discussions around the line between expression of religious belief and behavioral discrimination that one cannot simply make a generalization of what bills Filipino Catholics will endorse. The fact that we have a government representative dismissing the human rights concerns of the LGBTQIA+ community further confirms that this community is indeed being marginalized and thus deserves explicit legal protection.

Some senators that have refused to support the Sexual Orientation, Gender Identity, Gender Expression, and Sex Characteristics (SOGIESC) anti-discrimination bill often cite reasons that show their lack of understanding of what the bill actually contains. The issue of same-sex marriage is not covered in the bill, and it does not accord special rights to the LGBTQIA+ community. It merely makes explicit that basic protections from discrimination, hate crimes, and harassment should be accorded to this community as well. The SOGIESC anti-discrimination bill is a rights-based piece of legislation that recognizes that members of the LGBTQIA+ community have long been discriminated against when it comes to health care, housing, education, employment, and public services. It also covers protection from hate crimes and harassment.

Ideally, this cannot be more simple: protection of human rights should be accorded to all. In reality, however, asking a dominant group to accord rights and protections to a minority group has always met resistance. Dominant—and thereby more powerful—groups tend to prefer the status quo and resist change because they fear losing their own protections and freedoms. See how the knee-jerk reaction of one congressman is to submit a counterpart bill protecting the rights of heterosexuals. It is as if according rights to one group means the deprivation of rights of another group. That is simply not how rights work. If I have multiple children, respecting the right of one child does not necessarily mean I must then impede the rights of another. I can—and should—respect the rights of all children. People who don’t identify as LGBTQIA+ won’t be adversely affected by this bill; in fact, it provides protections for all, since SOGIESC encompasses cis-heterosexual persons as well. Just a reminder, we all have sexual orientation, gender identity, gender expression, and sex characteristics. It’s just that if you belong to the dominant SOGIESC group, then you are less likely to experience discrimination against your SOGIESC status and feel less need for such a bill. This does not mean that people different from you don’t experience it.

One can still express different opinions and argue about them; one can still express their religious beliefs. Expressing one’s religious beliefs doesn’t mean, however, that you have the right to harm others. For example, if a religious belief promotes and encourages child abuse, our law steps in to protect the rights of the child. This example doesn’t seem to hold much disagreement, since majority do understand the need to keep children alive and safe. However, when it comes to SOGIESC issues, it seems that others think that there is no limit to how much they can systemically suppress and oppress LGBTQIA+ individuals, as long as they invoke the name of their religion. There was once a time when our colonizers used religion as a justification for oppressing Filipinos. We were segregated and forced to conform to Western beliefs and customs, including the notion of a hierarchical binary gender. If anything, the use of religion as justification for oppressing others is the Western influence, not SOGIESC.