A better PH can start with better motorists | Inquirer Opinion

A better PH can start with better motorists 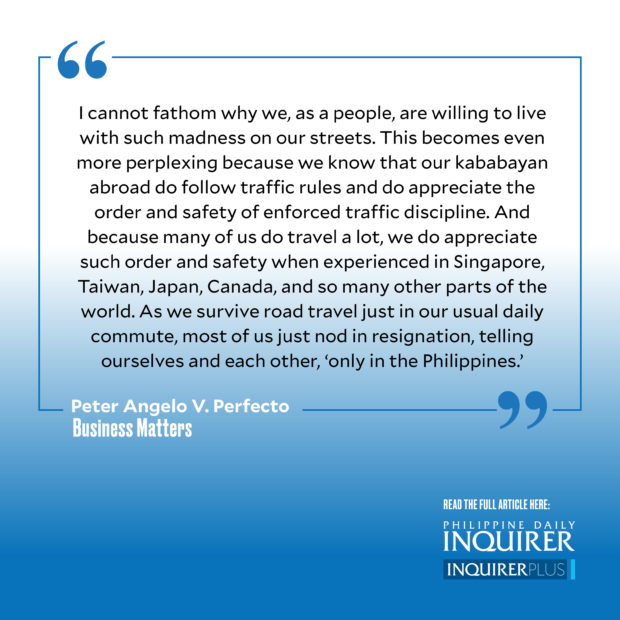 In the ’90s, when I was still part of Amnesty International Pilipinas as its executive director, we would welcome leaders from our international secretariat and executive committee to speak at our membership and public events and to give some guidance on growing our work for human rights in the Philippines. One such visitor was an Australian, Dr. Ross Daniels, who once told one of our assemblies that “in the Philippines, I have learned that traffic lights are optional.” The assembly laughed, but many of us also realized that he spoke of a reality that needed attention aside from the country’s dismal human rights record then. Unfortunately, this ugly fact simply became, over the years, one in a collection of “only in the Philippines” scenarios or stories.

Sadly, to this day, traffic rules continue to be violated as if they were optional, a mere suggestion. Most drivers, I bet, will not even know what a double yellow line means in a two-way street and, clearly, many have no awareness of the need to keep pedestrian lanes and intersections unobstructed despite the clear markings, repainted every so often to make them very obvious even to the visually impaired. The explosion in the number of motorcycles on our streets has exacerbated the traffic mess as most riders believe with even more fervor that traffic rules are not just optional but do not apply to them. They are the new kings of the road, weaving through our roads, using bike lanes and sidewalks, blocking pedestrian lanes at intersections, counterflowing despite double yellow lines, islands, and concrete barriers, and taking all other options available just to get ahead.

If Daniels were to return to the Philippines today, he would no longer joke about traffic rules and just call our streets Filipino mayhem and madness. He would probably quip in his full Australian accent that in the streets of the Philippines, “every day could be a good day to die!”

I cannot fathom why we, as a people, are willing to live with such madness on our streets. This becomes even more perplexing because we know that our kababayan abroad do follow traffic rules and do appreciate the order and safety of enforced traffic discipline. And because many of us do travel a lot, we do appreciate such order and safety when experienced in Singapore, Taiwan, Japan, Canada, and so many other parts of the world. As we survive road travel just in our usual daily commute, most of us just nod in resignation, telling ourselves and each other, “only in the Philippines.”

First and foremost, can we all stop saying “only in the Philippines” for things like the absence of traffic discipline? Saying that simply reinforces in our minds and hearts that some things will just never change for the better. “Only in the Philippines” must become a collection of good stuff and not of the stuff that contributes to our once again becoming the sick man of Asia.

Second, can we demand more action from our local governments, our police, and our relevant national agencies that it is high time that they do their jobs and enforce traffic discipline among our motorists, including motorcycle riders? The fact that Filipino drivers can and do follow rules when driving abroad simply shows that enforcement can cure them of their driving beast modes. Violators have to be apprehended, en masse if needed! And traffic discipline programs must be sustained. Safety on our roads can never be consigned to “ningas-kugon” efforts because the cost of doing so is lives snuffed out forever.

And, yet again, the challenge to Philippine business. Can’t you play a role in instilling discipline among all your employees to drive safely? Can’t you penalize your employees if proven to be reckless drivers? Aside from awareness raising, make traffic violations also a black mark on their performance records. Tie up with the traffic enforcement agencies so that such bad behavior on our streets can be monitored. Mind you, even commuting employees need to be reminded to use pedestrian lanes, as well as overpasses and underpasses. Aside from penalizing, reward those with clean records and those who help the advocacy for a return to order in our streets.