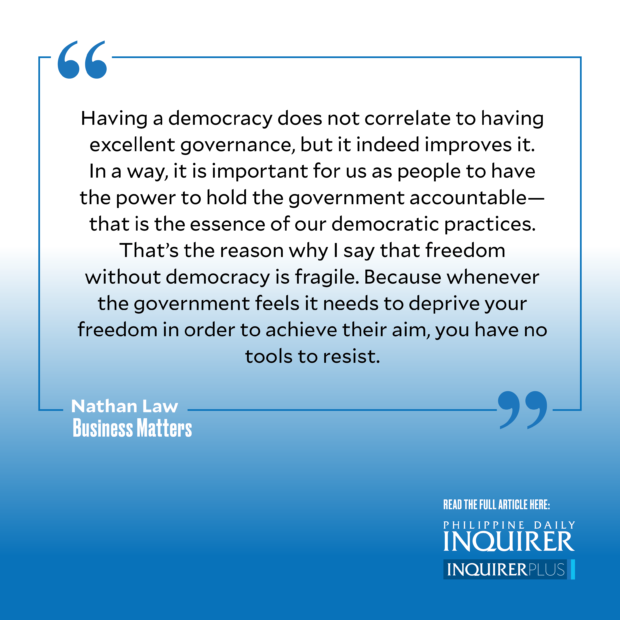 I grew up in an apolitical family. My parents were from mainland China. My father swam from mainland China in the late ’70s because there was a big famine, and no food in his village. Since then, he worked in Hong Kong as a construction worker. My mother was a cleaner. I lived in government-subsidized housing in an impoverished neighborhood.

Both of my parents refused to talk about politics at home because they felt it’s just too far away. Even if they think there’s something wrong in mainland China and the Chinese Communist Party, they don’t want to talk about it. They don’t want me to know anything about it—they just wanted stability. That was my environment growing up.

I didn’t learn about the concepts of democracy or human rights until 2010 when I was in high school—the writer Liu Xiaobo was denounced by my school after he received his Nobel Peace Prize. My school said he was a traitor to the Chinese. This made me even more curious because I believed that people getting the Nobel were excellent in their field. I looked up Liu Xiaobo and that became a moment of awakening—it opened up the importance of human rights and democracy for me.

I am now a human rights activist. In Hong Kong, I was a protest leader. In 2016, I was elected as the youngest lawmaker in Hong Kong’s City Legislature at the age of 23. Even though I was eventually disqualified and unseated under Beijing’s oppression, I still served the people for nine months. After that, I was jailed for my peaceful participation in assemblies in 2017. A few days after the National Security Law was implemented in 2020, I fled Hong Kong and landed in London to continue my advocacy.

I advocate for freedom and democracy in Hong Kong and also remind the global community, especially leaders in democratic countries, that we need to safeguard our democracy. We need to be aware, and implement mechanisms to hold perpetrators accountable on a global level.

What I’ve been through the past few years is a reflection of Hong Kong’s deterioration of freedom. It is important to see Hong Kong’s democratic movement and its past resistance from a historic angle—Hong Kong was a British colony for more than 150 years. In 1997, the British government handed over Hong Kong’s sovereignty back to the Chinese government.

The 1980 negotiations about Hong Kong’s future were an anxious time for its people. If you look at colonialism on a global scale, it is inhumane. But in Hong Kong’s case, it is quite different. In the last decades of Hong Kong’s colonial history, the British government built the infrastructure for the financial sector and created a much more cosmopolitan city. This was done in order to empower the people to resist the regime in mainland China.

The 2019 protests showed that the Beijing government did not keep this promise. It circumvented legislation and consultation processes to implement the National Security Law. In 2021, we can say Hong Kong is a completely authoritarian state. We don’t have meaningful elections anymore, and democratic institutions are being hollowed out; the civil society and the free press are being suppressed.

Having a democracy does not correlate to having excellent governance, but it indeed improves it. In a way, it is important for us as people to have the power to hold the government accountable—that is the essence of our democratic practices. That’s the reason why I say that freedom without democracy is fragile. Because whenever the government feels it needs to deprive your freedom in order to achieve their aim, you have no tools to resist. You are just persecuted without much interest in holding the government accountable.

There are investors who say they used to see Hong Kong as a safe harbor. If they had any troubles they needed to sort out in mainland China, they would move to Hong Kong to ensure the court is just—that they can rule according to the law. But whether Hong Kong still has that same nature, it is up for debate now. I can truly say that the confidence of international business in Hong Kong faces a lot of challenges. Even if a lot of them still operate there, many others for example have already moved their Asian headquarters out of Hong Kong.

Investors are worried about whether a place could still be highly competitive in terms of the free market, free flow of information, and free movement of the press. This is a medium- to long-term worry, but definitely there will be issues in terms of investor confidence—whether this place, even though we know it looks good now, might not look as good in 10 years or in 20 years’ time.

Nathan Law is one of the youngest lawmakers in Hong Kong. He continues his work in exile to retain Hong Kong’s freedoms under a very different system of government. This column is an edited version of his remarks in MBC’s Global Freedom and Democracy series last November 2021.