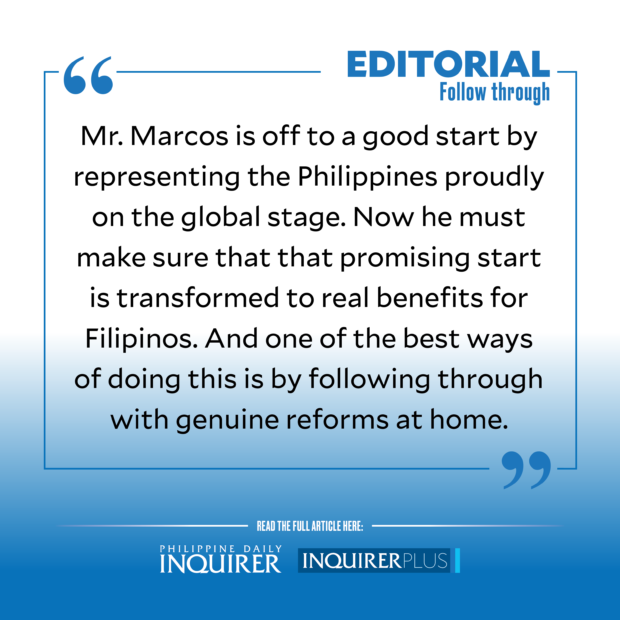 Follow through is the concept of extracting the most power, speed, and accuracy—and consequently, the best chance of scoring a successful point that will contribute to a winning score—by continuing the swinging movement of the athlete’s arm or leg after he has hit the ball with his tennis racket, baseball bat, or golf club, or kicked a football.

The idea is to impart the greatest momentum on the object being hit, and not limiting the propelling force by slowing down or stopping the motion just as one is hitting the ball.

And following through in the manner of an athlete hitting the ball to its intended target is exactly what President Marcos Jr. needs to do after his successful trip to the Asean Summit in Phnom Penh a few days ago.

During that recently concluded meeting of regional and world leaders, our Chief Executive made all the right noises: pushing for a code of conduct in the South China Sea, advocating the peaceful resolution of the differences between China and Taiwan, raising the issue of the conflict in Ukraine, and making a stand on the political violence in Myanmar.

He even threw in the added bonus of wearing the barong Tagalog smartly and properly on the international stage—truly a sight for eyes made sore by seeing the country’s leader wearing formal attire with the collar open, sleeves rolled up, or neckties loosely done.

But among the positive moves he made overseas, the Myanmar issue is especially important since the Philippines has, for the most part, always been vocal about supporting democratic movements in the regional bloc that is noted for its refusal to meddle in each other’s internal affairs.

In particular, the Marcos Jr. administration must seriously address the alleged human rights violations in recent years being probed by the International Criminal Court and the United Nations.

Rather than having a defensive stance that gives his predecessor blanket protection from being investigated for the thousands of extrajudicial killings, it is important for Mr. Marcos to adopt a policy of openness and cooperation when dealing with the issue of drug-related killings.

The Secretary of Justice has made a welcome and important first step by traveling to Geneva to meet with representatives of the UN’s human rights body. Justice Secretary Jesus Crispin Remulla is correct in wanting to protect the sovereignty of the Philippine justice system from unwarranted foreign influence. But he, too, must follow through by showing people abroad and at home—with concrete action that augments his reassuring words—that our system can function fully and deliver impartial justice even when doing so is inconvenient for politically powerful people.

The same can be said for the other equally important issues the President is highlighting in his dealings with foreign leaders. What he is pushing for abroad must be backed up by concrete action at home.

If he wants overseas Filipino workers to be treated better by their foreign hosts, we’d better start at home by treating our own workers with more compassion and greater rights. If he wants more cooperation with other nations to ensure greater food and energy security locally, his administration had better double time on the reforms needed to modernize the Philippine agriculture sector and make the local energy industry more efficient. The list goes on.

Mr. Marcos is off to a good start by representing the Philippines proudly on the global stage. Now he must make sure that that promising start is transformed to real benefits for Filipinos. And one of the best ways of doing this is by following through with genuine reforms at home.

That way, the Chief Executive will show the international community that he is serious about cleaning up and making up for his predecessor’s shortcomings. And, perhaps more importantly, he will show the pockets of doubters and critics at home that his act of putting his best foot forward while abroad is not just for show.

Indeed, few things are sadder to behold than a promising start that falls short because one failed to put one’s money where one’s mouth is.

To avoid this recurring curse of Philippine chief executives who end up falling short of their promises, a good follow-through by the President is critical for the success of his administration and, ultimately, that of the Filipino people.