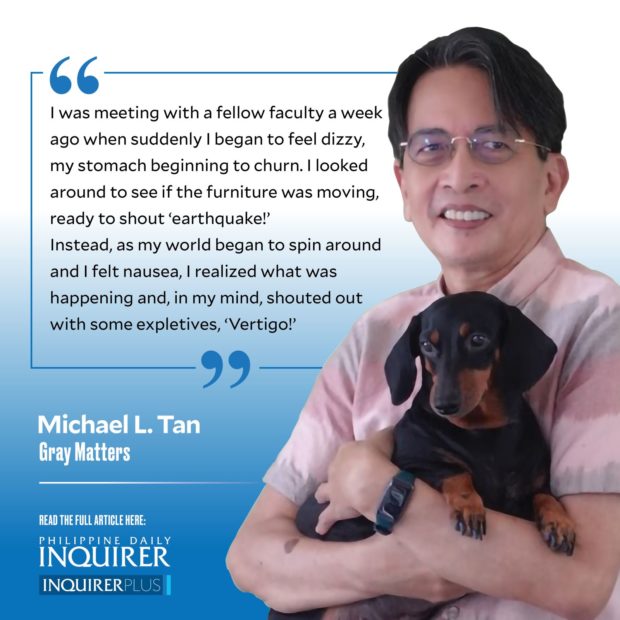 For a week now, when people ask me how I am, I tend to answer, “gobbly wobbly,” which means I’ve been walking like a turkey, swaying from one side to another, more often like I’m being pushed by someone to the left.

Which is what I’ll answer next time I’m Red-baited and accused of being leftist.

I am told by Dr. Google this is not a disease in itself but a condition, just like being leftist or rightist.

Let me explain what’s happening, with a minimum of gobbledygook, a term coined by an American politician named Maury Maverick, who waged war on speech filled with too much pomposity. Using fancy words like pomposity, he declared, makes you sound like a turkey, thus gobbledygook.

It’s turkeys too who walk gobbly wobbly, and there’s a children’s game in the west called gobble wobble where you imitate the way a turkey moves, spin around, and then reach down to touch the ground.

Ah, but if you have the condition that’s been tormenting me, it would be impossible to do the gobble wobble. No, especially not the spin.

I was meeting with a fellow faculty a week ago when suddenly I began to feel dizzy, my stomach beginning to churn. I looked around to see if the furniture was moving, ready to shout “earthquake!”

Instead, as my world began to spin around and I felt nausea, I realized what was happening and, in my mind, shouted out with some expletives, “Vertigo!”

I have known enough people who suffer from vertigo, and who have graphically described what they go through, and realizing I was going through vertigo was turning me existential. Why me? Why now? Am I going to die?

I tend to suffer alone, and in silence, but I felt it’s important to write about vertigo, from firsthand experience. It’s a terrible affliction, worse for people like myself because it makes so many activities so much more difficult, from picking up something on a lower shelf, to walking, to writing columns, to reading.

But the need to know is unrelenting and for days, I struggled, bedridden, with cell phone searches to find out more about this vertigo.

Vertigo reminds us of how strange our bodies can be. We have ears that aren’t just organs for hearing; deep in the ear’s inner recesses and labyrinths are coiled tubes filled with water that look like a snail, making up the vestibular system, or a system for balance.

The snail is our GPS, our geographic positioning system, like the ones we have in our cellphones and other gadgets. The vestibular system sends signals to our brain telling us what position we’re in, and the signals instruct different parts of the body, including the eyes, our muscles, what to do to maintain balance.

With age, or sometimes because of infections, or medicines and substances we take into our body, the positioning systems runs awry. A split-second delay in the signals, or a wrong signal, and literally our world starts to spin around us. We struggle to regain the balance, second to second, and end up gobble wobble.

Vertigo has so many related conditions. There’s a sibling, motion sickness. The car’s moving, but our brain has problems coping with that motion. I had motion sickness as a kid and was relieved I outgrew it, only to have it replaced by acrophobia. Hitchcock’s main protagonist in the film “Vertigo” was a detective who stumbles on a solution to a crime, while up in a bell tower. Nothing that grand with me except taking my children on Ferris wheels and, oh, but I’m feeling dizzy again, on ziplines.

Vertigo confounds because it’s confounding. So many reasons why our ancient GPS can go wrong in a modern world filled with strange moving things, as well as stuff that we ingest and radically changes our body’s perceptions.

I have childhood memories of throwing up on Coke, which I was told to avoid, together with coffee. But last week, I was looking for my usual perk-up beverage, which is tea. There was none, and the office smelled so good with coffee brewing. Just a little please, I accepted an offer.

But now, in my continuing episodes of vertigo, even a whiff of coffee’s aroma makes my head spin. A good sign, I think.