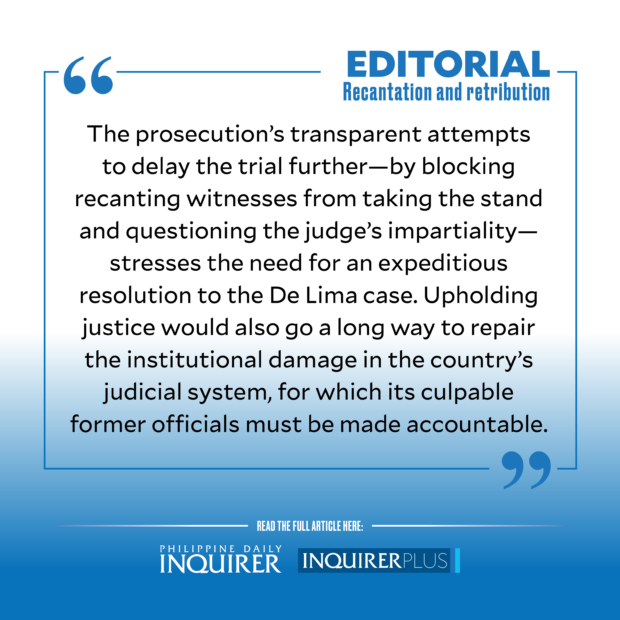 With former Bureau of Corrections (BuCor) chief Rafael Ragos affirming before a Muntinlupa court his earlier affidavit recanting his claims about detained former senator Leila de Lima’s alleged links to the drug trade in the national penitentiary, what happens now?

Ragos told the court that he was coerced into signing prepared affidavits on three occasions in 2016 and 2017 falsely accusing De Lima of receiving bribes from drug lords in prison, under pressure from former justice secretary Vitaliano Aguirre II. Ragos’ lawyer, Michael Christopher de Castro, said it was the official who gave his client the order to “corroborate [the charges] or you know what happens.” Ragos also recalled being once dragged to the Public Attorneys Office (PAO) to sign another affidavit prepared by PAO lawyers.

De Castro has since filed a motion to suppress and expunge all of Ragos’ earlier affidavits, as these were done “without independent and competent counsel.” He also downplayed the video recording that, Aguirre claimed, would disprove the BuCor chief’s claim of him being coerced to implicate De Lima.

Aside from Ragos, three other witnesses have earlier retracted their allegations against the former senator: Marcelo Adorco, said to be the bodyguard and driver of confessed drug dealer Kerwin Espinosa; Espinosa himself, and De Lima’s former driver Ronnie Dayan. All four established a pattern of pressure and coercion from key officials of the previous administration, which seemed intent on putting behind bars the former Commission of Human Rights chair who, in 2009, had called out then Davao City mayor Rodrigo Duterte for alleged extrajudicial killings under his watch.

With the prosecution’s case crumbling because its main witnesses have walked back their damning testimony, will the court now investigate and go after those behind what could be subornation of perjury? Shouldn’t Aguirre and the PAO chief and lawyers be made accountable for witness tampering and obstruction of justice? As officials of the Department of Justice and its allied agency, shouldn’t they be penalized for making a mockery of the very law and institution they should be defending? Such partisan moves have eroded what little remains of the public trust in law enforcement.

It’s fair to say that, conscious of the widely held perception about the uneven scales of justice in the country, Justice Secretary Jesus Crispin Remulla has been very careful in handling sensitive cases, going as far as enlisting the services of independent forensic expert Raquel Fortun in validating the police’s and the National Bureau of Investigation’s (NBI) autopsy on slain broadcaster Percival Mabasa. Remulla also repeatedly declared that he would let the law take its course in the illegal possession of drugs charge against his son, Juanito, even as political observers note that his being the direct superior of the police, the NBI, and government prosecutors could have a powerful bearing on their actions.

The Marcos Jr. administration must be as circumspect in handling De Lima’s case amid the retraction of the prosecution’s main witnesses, and the inconsistencies in their earlier testimonies. Ragos, for one, had initially claimed that the money purportedly raised by the drug lords, and which he allegedly delivered to De Lima in 2012, was supposed to bankroll her senatorial bid.

Then there are the inordinate delays in her trial, with seven judges either availing themselves of early retirement or voluntarily inhibiting from the case since her detention in 2017. The mere perception of dire consequences from the country’s former top officials who have been calling the shots on the case from Day One could have a chilling effect on the judicial machinery and its agents.

The world, too, has been keenly monitoring De Lima’s case, with United States and European legislators, Amnesty International, civil society, and organizations of lawyers and judges urging the Marcos Jr. administration to review it, “officially recognize” the lack of evidence, and drop all charges against her.

The calls became more urgent after De Lima was held hostage on Oct. 9 by a detained Abu Sayyaf terrorist in his bid to escape. Amid speculations on how such breach in security could have happened in severely restricted quarters, is the gnawing fear that the hostage-taking could be a botched attempt to silence the vociferous Duterte critic.

The incident only underscores the need to secure the witnesses who recanted as they could be targeted by lawless forces, as they could reveal the possible involvement of other high-ranking former officials.

The prosecution’s transparent attempts to delay the trial further—by blocking recanting witnesses from taking the stand and questioning the judge’s impartiality—stresses the need for an expeditious resolution to the De Lima case. Upholding justice would also go a long way to repair the institutional damage in the country’s judicial system, for which its culpable former officials must be made accountable.