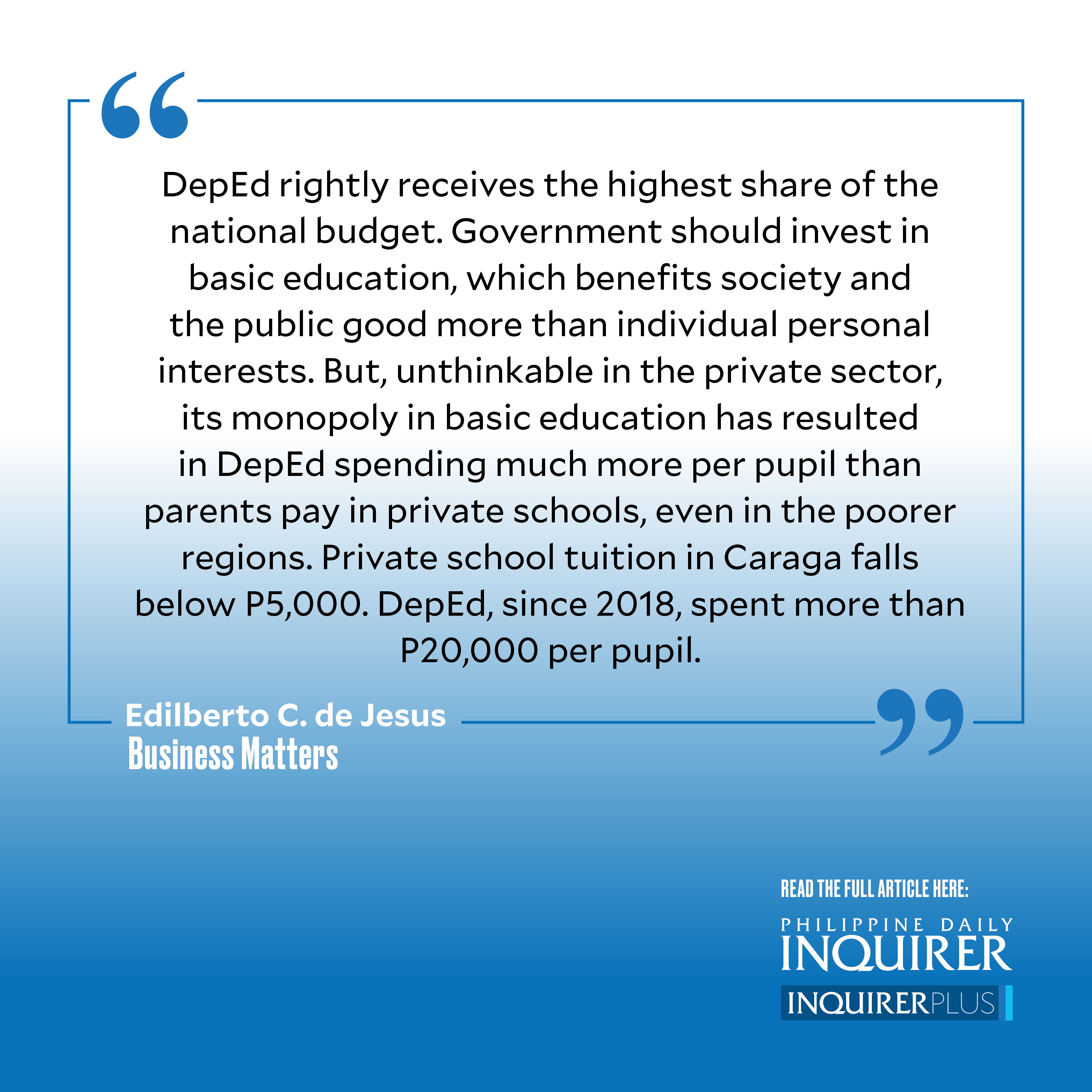 Why? The Department of Education (DepEd) controls over 90 percent of the K-to-12 enrollment. Economies of scale should give DepEd a cost advantage. Yet everywhere, except in the National Capital Region and Region IV-A, the government, on the average, spends more per DepEd student (P18,000) than parents pay for private school tuition (P8,000).

Some plausible, not necessarily equally justifiable, explanations. DepEd must service “missionary” areas in remote locations lacking basic facilities, where operating costs are higher. It must support budgetary items that burden private schools much less, such as official foreign travel to meet its mandate to represent the country in the international arena. DepEd expenses, such as for teacher salaries, must follow legislated national rates, regardless of local costs. But private schools do not provide confidential, intelligence funds that DepEd itself never claimed until this administration.

The scale of operations stretching across the archipelago and a centralized administration also combine to make management supervision more complex, more expensive, and more vulnerable to corruption—exposed recently again in the allegedly anomalous P2.4-billion DepEd procurement of laptop computers. Corruption happens in private schools, but hardly of this magnitude. Multibillion scams add to the cost of public sector operations.

DepEd rightly receives the highest share of the national budget. Government should invest in basic education, which benefits society and the public good more than individual personal interests. But, unthinkable in the private sector, its monopoly in basic education has resulted in DepEd spending much more per pupil than parents pay in private schools, even in the poorer regions. Private school tuition in Caraga falls below P5,000. DepEd, since 2018, spent more than P20,000 per pupil. Parents’ private school education burden must include their share of the taxes that support DepEd, which does not serve their children. Unfortunately, international assessment tests contradict what would be DepEd’s best justification for its costs—that it is providing better quality education than private schools.

The cost disparity instead provides the best rationale, recently advocated by Cristina Research Foundation (CRF), for expanding the Government Assistance to Students and Teachers in Private Education (Gastpe) or voucher program that permits the government to support private high school students DepEd cannot accommodate in its classrooms. But Gastpe, like DepEd, provides broader access to education, not necessarily better quality. A program premised on the superiority of private to public education would have encountered heavier DepEd resistance. Cristina deserves credit for the timely reminder of the higher costs of DepEd education and its Gastpe advocacy.

CRF estimated some 3.3 million DepEd high school “aisle” students, beyond the capacity of its schools to accommodate the 1:25 class size norm. Moving them to private schools will require an additional budget of P38 billion. Still, cheaper to buy unused capacity in accredited private schools than to spend for additional classroom construction and higher-cost teachers for aisle children, especially with DepEd again complaining about classroom shortage.

Politicians court the votes of government employees with promises to promote the interests of the department, which includes better pay and perks. Election then places them in a position to guide the behavior of bureaucrats, so that decisions—on locations, for new school construction, teacher appointments, procurement contracts—favor their interests rather than those of their rivals. Far easier to capture the support of the official bureaucracy than the more diverse and fragmented private sector.

With rising inflation and depleted government resources, we need a rigorous accounting of the cost disparity between public and private delivery of basic education and its consequences for educational access and quality. Will this happen? Perhaps, but only with sustained public pressure.