No peace in PEACe bonds 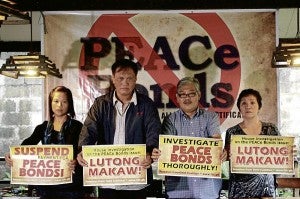 Ten years ago, the people saw the rise of a non-government organization through what many perceived as unethical transactions with the Arroyo administration.

It seemed as if the group was being repaid for its active role in installing Gloria Macapagal-Arroyo to the presidency.

The PEACe bonds, issued by the Bureau of Treasury, were 10-year zero-coupon bonds designed and lobbied by CODE-NGO.

The bonds were sold at a deep discount from their face value, or the actual value that will be paid to the bondholder after a designated period.

These were called “zero-coupon bonds” because the issuer will not make periodic or coupon payments to bondholders. Instead, the bondholders will receive a large premium when the debt paper matures.

On Oct. 16, 2001, the Treasury offered P50-billion worth of zero-coupon bonds to the public through an auction. Only P35-billion worth of bonds was sold. The bonds were sold at a discounted rate for which the government received P10.16 billion.

It was not the bonds themselves that funded the programs of CODE-NGO. In essence, what the group did was to design the bond, purchase it through RCBC and resell it to RCBC Capital, a sister company of the bank. The profit CODE-NGO made from the secondary sale was channeled to its antipoverty programs.

Where it went wrong

Offhand, there was nothing wrong with an NGO generating funds for its propoor programs with government bonds. What is wrong with an NGO trying to find ways to fight the nation’s lingering poverty problem? A serious scrutiny of the transactions, however, pointed to a very disturbing deal.

In 2002, the Freedom from Debt Coalition (FDC) did a study that found that the deal reeked with rent-seeking—rules were relaxed and CODE-NGO walked away with P1.8 billion in windfall profit plus a commission of P140 million for designing what it called an “innovative fund-generating mechanism.”

The FDC paper, “On the Matter of the Peace Bonds” (2002), presented the following facts:

CODE-NGO lobbied hard with the Arroyo administration to sweeten the bond with tax exemptions and eligibilities;

It then tried to ensure its targeted P1 billion profit by keeping the deal all to itself in a negotiated sale;

When the negotiated sale was not possible, the ensuing bidding revealed “features” that would favor the most prepared—CODE-NGO. It had worked on the deal longer than anyone else and was intimately familiar with the details. Its bank was prepared way ahead of its rivals;

CODE-NGO kept the sweetest eligibility to itself (the security/statutory-deposit eligibility and asset admissibility for insurance companies) and sought its approval only after it won the auction in its entirety;

It purchased the bonds with money it did not have and sold the securities to investors affiliated with RCBC, which was the very bank that underwrote the deal. For this, CODE-NGO earned P1.8 billion in gross profit. It then distributed the windfall, paying its financial advisers and RCBC at least P400 million in fees;

It kept 10 percent of the P1.4 billion, P14O million, for itself, then set up the Peace, Equity and Access for Community Empowerment Foundation (Peace and Equity Foundation) with a permanent endowment of roughly P1.3 billion.

From these facts, we arrive at eight conclusions:

1. An NGO close to the Arroyo administration that did not have adequate funds but enjoyed exclusive information on the transaction was able to buy 10-year treasury zero-coupon notes worth P10 billion and resold it to RCBC for P11.8 billion.

2. Because the Arroyo administration failed to do a road show for the bonds, other civil society organizations and social movements, which may have wanted to participate in the process and work with eligible government securities dealers, were deprived of the opportunity to take part in the auction.

3. CODE-NGO, without sweat, earned P1.8 billion for the zero-coupon bonds that it bought with “zero money.”

4. The auction was done manually using fax machines to submit bids instead of using electronic means. As manual auctions are more open to manipulations and leakages, the auction could, at best, be deemed irregular. At worst, it could have been rigged.

Financial analysts said the PEACe bonds hold the record for having the widest differential between the highest bid and the lowest bid. This is an indication of an information asymmetry in the market. When the latter exists during an auction, the auction must be declared a failure.

5. The money CODE-NGO earned could have gone to the government if RCBC directly bought the bonds from the Treasury for P11.8 billion. Thus, the public was denied P1.8 billion in additional earnings.

6. CODE-NGO engaged in a “simulated transaction” as the real awardee of the bonds was RCBC. CODE-NGO merely acted as a conduit.

7. Because it used the bonds as a conduit for the sole purpose of earning windfall profits, the bonds had no exact value for the group. Therefore, when CODE-NGO lobbied for eligibility and special features for the bonds, it acted on behalf of RCBC and the banking community as a whole, which they admitted by saying, “it is the only way the deal with RCBC could take place.”

8. Then CODE-NGO head Marissa Camacho and then Finance Secretary Jose Isidro Camacho are siblings. This raised the question of possible conflict of interest and may have enabled CODE-NGO to enjoy undue advantage.

These conclusions also raised new questions. For example, if indeed funds were extended to CODE-NGO by a private institution to buy the bonds, did that financial intermediary not recklessly risk its financial integrity and violate Bangko Sentral ng Pilipinas rules on the extension of credit despite the lack of security and safeguards as well as a borrowing history that would have merited the extension of credit?

Second, what are the terms of the credit extension? Where are the documentation of the facility and the acceptance of the adequate security, collateral, undertakings and guarantees? These would have proven the credit-worthiness of CODE-NGO.

Third, a question surrounds the legality of the bonds. The Department of Finance is supposed to be responsible for the review, approval and management of all public sector debt. However, the secretary of finance, who inhibited himself from the transaction, failed to sign the approval of the bonds.

More questions beg to be answered, such as whether CODE-NGO paid taxes for its P1.8 billion in earnings, or, at least, for the P140 million it retained. [The Bureau of Internal Revenue has ruled that the bonds are subject to a 20-percent final witholding tax. But several banks that hold the bonds have obtained from the Supreme Court a temporary restraining order on the BIR ruling.]

To give CODE-NGO its due, it attempted to be transparent by presenting its side of the story. It also argued that the deal was “legal,” “transparent” and “propoor.”

However, based on the facts mentioned, one cannot help but assume that the transaction carries features of cronyism and influence-peddling in the name of the poor. Not even the argument of good intention is enough to wipe away the stain that was left by this transaction or recover the diminished public’s trust in NGOs.

Worse, the deal contributed to the further indebtedness of the people. On Oct. 16, the government was scheduled to pay P35 billion in interest for the matured P10-billion bonds, making Filipinos P35 billion poorer and deeper in debt.

At a time when the public is reeling from the adverse impact of increases in the prices of goods and services, the government’s underspending and the catastrophes brought about by the recent typhoons, carving out P35 billion from the public coffers is unacceptable, especially if the people will be paying for a transaction mired in irregularity.

To put closure to an embarrassing stain brought forth by the previous administration, President Aquino must step in, seek the truth and make those who may have erred accountable. The President’s action becomes even more important as some personalities implicated in the transaction are now part of his administration.

If civil society is willing to open a sad chapter of its history and reopen old wounds to rectify wrongdoings, then all the more that the Aquino administration should do its part to facilitate this process.

To address this issue, Malacañang must suspend the principal and interest payments of the PEACe bonds, pending the result of an impartial and independent investigation of the irregularity of the transaction and uncertainty surrounding the projects that were funded.

Already, a congressional inquiry on the matter is underway. But if this legislative intervention should turn out to be partial and devoid of transparency, Mr. Aquino must take the initiative of conducting the investigation. The investigation must also include an audit of how the proceeds from the sale of the bonds were spent.

Second, there must be a thorough review of policies such as rulings made by the Bureau of Internal Revenue, Bangko Sentral ng Pilipinas, the Monetary Board, Securities and Exchange Commission, Insurance Commission and other agencies with regulatory or quasi-regulatory powers to avoid irregular bond transactions and sweetheart deals.

Furthermore, civil society must also play a part in resolving the issue. Civil society’s transactions and engagements with government must be marked by the very same principles of transparency and accountability that it advocates. Those who call for clean government must abide by the same standards.

Transparency must begin with those who call for it. Civil society cannot claim the moral high ground if it does not stand by it.

(Tanchuling is the secretary general of the Freedom from Debt Coalition.)