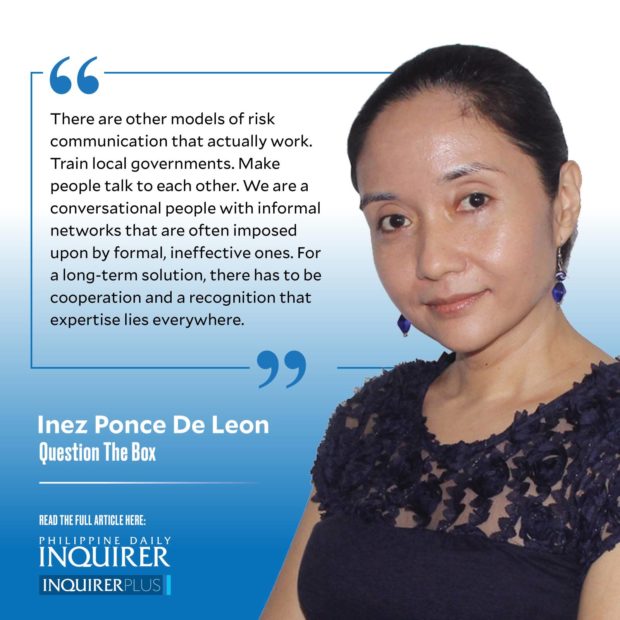 What followed was yet another blame game.

People blamed the forecasters. The problem with this argument is that the nature of forecasting, and all of science, is that of tentativeness. Weather forecasting, in particular, has to contend with the inherent unpredictability of natural hazards.

A storm of Paeng’s magnitude bumped into land masses, drew strength over multiple waterways, and sucked in water and wind. The storm was wobbly, and its path changed by the hour. You cannot lay blame on science, let alone equipment, for chasing a rapidly changing storm.

Others blamed the National Disaster Risk Reduction and Management Council (NDRRMC) for poor information dissemination. This is something that I have always argued against: to reduce communication to mere diffusion shortchanges both the complexity of the risk being communicated and the people that need to hear it.

Dissemination is often confused with communication, even as there are so many more effective communication models that have little to do with simply spreading information. There is very little reliable feedback on the effectiveness of dissemination. Often, institutions use action as metric of success. That is, if people evacuated, took action, or did what was expected, then it was because they obeyed disseminated orders.

However, people might have evacuated because they saw their neighbors leaving and didn’t want to lose space at the evacuation center. People might take action because their local officials knocked on their doors and told them what to do. People do what we expect because of factors we can’t anticipate.

And yes, this is all backed by research.

In previous storms, people threw out brochures, ignored online posts, and tuned out text alerts. They listened to their barangay officials because these officials shared their environment and knew them personally; the national government was too far away. When they saw news broadcasts, they discussed them with their neighbors, then made evacuation decisions after the discussion.

When I presented this information to our auditors, I recommended that we train our barangay officials to process information from the NDRRMC, establish networks within their community, and engage communities in discussion so that we could have long-term solutions to the lack of action when it came to floods.

The response: we need something to print. Training is too abstract.

The translation: we need something that we can put a government stamp on. We’ve used tarps for elections. We’ve labeled relief goods. Let’s just do as we’ve always done.

It’s absurd, years later, as I look back on that incident. It’s absurd because an effective local government is evidence that one’s government is working. What the auditor meant was that the national government wanted to make a show of its efforts.

A reader of mine, also a dear friend, has an appropriate term for this ailment: AIDS. As If Doing Something.

This auditor also revealed the government’s obsession with communication as mere “reaching,” which explains why its strategies don’t work. What happens after the communication reaches its target? There is no long-term plan, only an assumption that once the message reaches someone, they will simply obey. There is an obsession with what the message looks like, but no consideration of the context in which the message is received. There is reaching, but no compassion.

There is much to be changed in this government; but there, too, is this lingering dissemination model that makes its attempts at communication so ineffective.

There are other models of risk communication that actually work. Train local governments. Make people talk to each other. We are a conversational people with informal networks that are often imposed upon by formal, ineffective ones. For a long-term solution, there has to be cooperation and a recognition that expertise lies everywhere.

We need a government that plans for people to understand something, rather than one that merely reaches out and then absolves itself of any responsibility for what comes after. The government can’t claim to be surprised if it ignored the research all along.

To post something and call it communication? That’s just laziness.