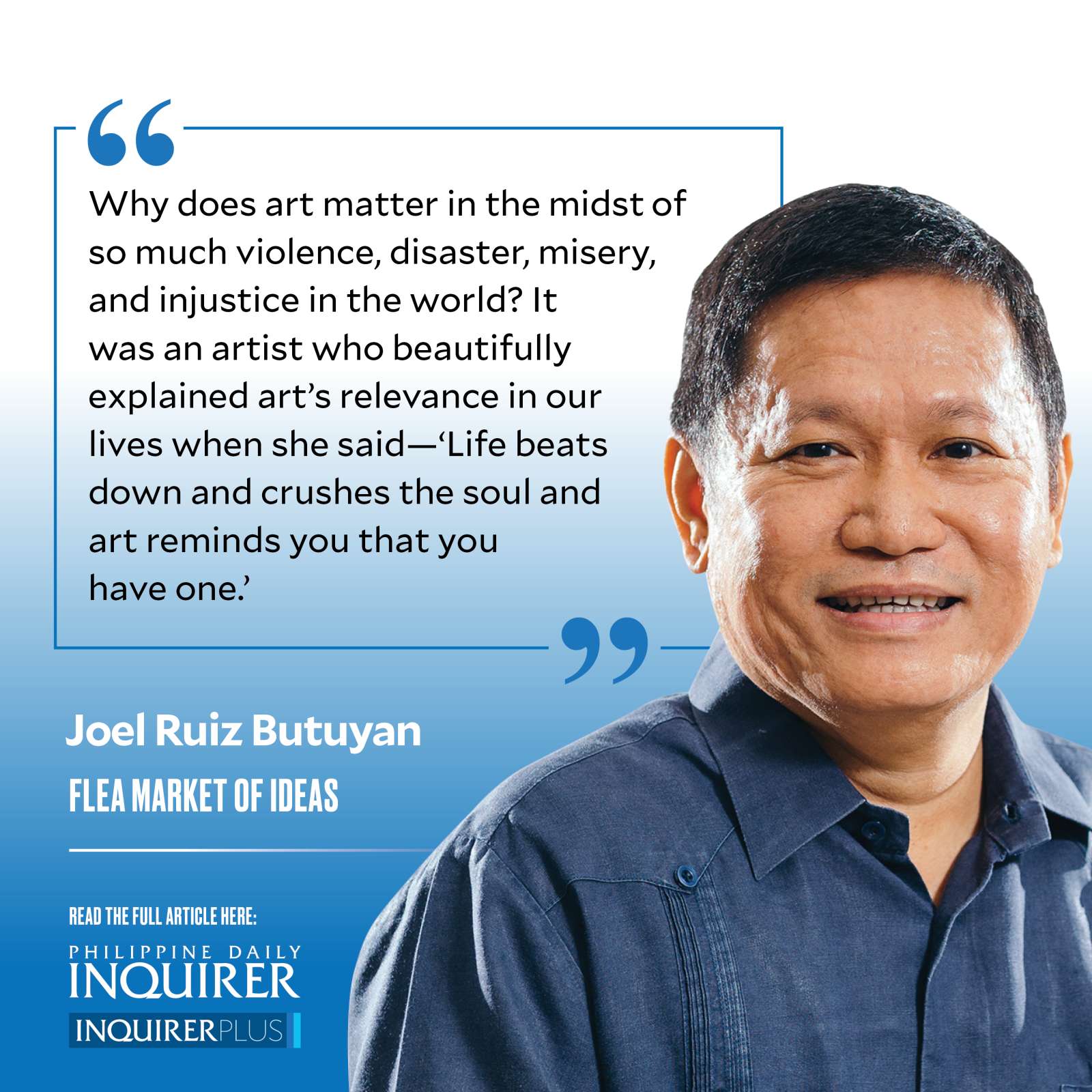 Madrid, Spain—I am on the last leg of a European trip that has brought me to Italy, France, and, finally, Spain. The principal reason for this trip is to witness art events, which all happened in Paris last week.

The first of these happenings is the art exhibition of renowned Filipino artist Elmer Borlongan, which opened last Oct. 20 at the Galerie Géraldine Banier, located in the Saint-Germain-des-Prés neighborhood. The gallery’s location has a long history of being a prominent place in Parisian intellectual and cultural life because it is where artists, philosophers, writers, actors, and musicians mingle. As a testament to Borlongan’s prominence in our country’s art scene, 16 Filipino art collectors traveled all the way from Manila to attend the artist’s first solo show in Europe. Borlongan’s exhibit is entitled “When time stood still,” and it consists of 15 new paintings and monotype prints that the artist worked on during the COVID-19 years.

Visually, the artworks present diverse presentations of how humanity coped with the great pandemic when time stood still. Individual characters are depicted soliciting divine benediction, kissing but not kissing as the affectation is hindered by the obligatory mask, begetting solace from tended plants, engendering comfort from a playful canine and an affectionate feline, working out upside down from a monkey bar, kneading dough pensively, among others.

Subliminally, however, Borlongan’s characters evoke a uniform sense of introspection or deep thought. One can fathom the trepidation, despair, hope, and grit of his characters from their eyes, posture, and overall aura. The artist is acclaimed for his impressive ability to infuse his subjects with the emotional or behavioral comportment he bequeaths to them.

The exhibit opening was well-attended, not only by Filipino compatriots based in Paris and those who flew in for the occasion, but also by a good crowd of French art aficionados who were curious with questions about the artist and the featured paintings. Philippine ambassador to France, Junever Mahilum-West, led a cocktail party in the artist’s honor at the Salon Duc de Doudeauville.

French art critic Béatrice de Rochebouet had this to say of Borlongan and his art: “Elmer Borlongan tirelessly continues to paint the stories of his people, of their daily struggle and resilience. This is why his paintings touch us, move us and pierce us. They speak to us of subjects with universal resonance. About family, relationships, work and the freedom he believes in as an artist and for which he ardently defends the community … Elmer Borlongan’s painting(s) (are) imbued with strong and disturbing messages that resonate with our world in crisis. A mature artist, very attached to the culture of his country, he has a full place in the troubled times in which we live. And still so much to say, without compromise.”

The second art event was the first edition of “Paris+ par Art Basel,” an international art fair that featured 156 galleries from 30 countries and territories, and held at the Grand Palais Éphémère. The overwhelming works at Art Basel were abstract and conceptual art pieces that communicate the inward-looking perceptions of the artist, rather than visual narratives of the artist’s outward perceptions of reality, which predominates in countries beset with social and political challenges like the Philippines.

The third art event was the “Asia NOW Paris” art fair, which was participated in by 88 galleries that exhibited the art works of Asian artists. There was a hip vibe in this event, and I wouldn’t be surprised if the artistic offerings resonated with more relevance and connection with the younger generation. The Philippines was proudly represented with the works of several Filipino artists such as Leslie de Chavez, Nona Garcia, Ciane Xavier, Martin Honasan, Is Jumalon, and Mark Nicdao.

But why does art matter in the midst of so much violence, disaster, misery, and injustice in the world? It was an artist who beautifully explained art’s relevance in our lives when she said—“Life beats down and crushes the soul and art reminds you that you have one.”