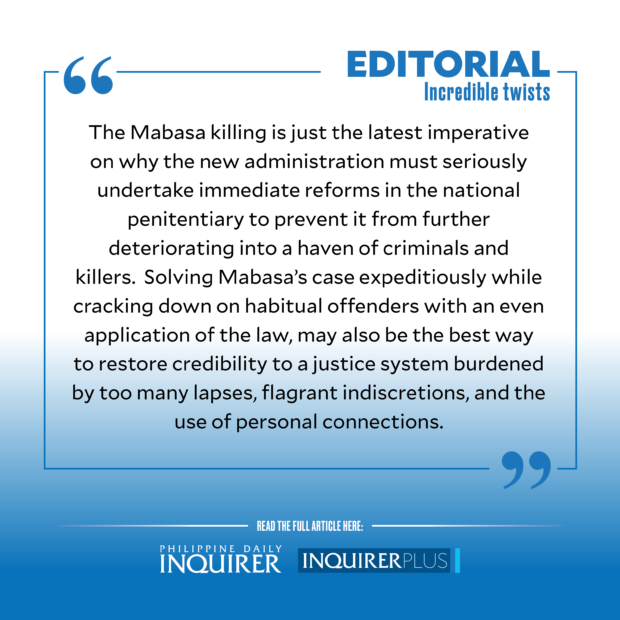 If foul play was involved in the death of the alleged middleman named in the killing of hard-hitting broadcaster Percival Mabasa aka Percy Lapid, it only goes to show that the party behind the murder had been one step ahead of the police. With the middleman now conveniently gone, hopes of identifying the mastermind have dimmed.

Saying he didn’t believe in coincidences, Justice Secretary Jesus Crispin Remulla ordered the National Bureau of Investigation (NBI) to conduct an autopsy on the alleged middleman, identified as Jun Globa Villamor, who died just hours after confessed gunman Joel Escorial was presented to media after his surrender last week.

Escorial told police that a Crisanto Palana Villamor, an inmate at the New Bilibid Prison (NBP), had contracted him to kill Mabasa for P550,000. At the onset, Mabasa’s younger brother Roy, himself a journalist, had been appealing to authorities to secure the alleged middleman, as if the police needed to be told how to do their job.

The NBP initially told the Las Piñas police that the facility had no person by that name. It turned out, Remulla explained on Friday, that Villamor went by three different names, with Jun Globa Villamor being the name on the NBP record.

But why didn’t NBP officials verify their records diligently and those of other correctional facilities, considering that the media had widely reported about the alleged middleman being in prison? Villamor was allegedly found unconscious in his cell at the NBP’s maximum security compound on Tuesday and was DOA (dead on arrival) when taken to the prison hospital. Other reports said he died of “undetermined” cause. Why the discrepancy in the story?

The NBI on Saturday released its autopsy result, confirming the NBP’s findings of “no apparent sign of external physical injury.” Forensic pathologist Dr. Raquel Fortun, however, doubted the results, noting that the autopsy was conducted after the body had been embalmed.

In another twist to the story, it turned out that there was an alleged second middleman, a detainee identified as Christopher Bacoto who, authorities claimed, has been secured under the custody of the Bureau of Jail Management and Penology (BJMP).

Such confusion and labyrinthine twists and turns in the story, not to mention the lack of coordination among the different agencies, have done little to shore up the credibility of the investigation on Mabasa’s killing. Not only have such lapses slowed down the resolution of the case, but they’ve also given those involved in the murder the opportunity to pull strings to cover their tracks.

Suspending Bureau of Correction (BuCor) director general Gerald Bantag, on orders of President Marcos Jr., is the first step to get to the bottom of Villamor’s killing and his supposed involvement in Mabasa’s case. This should also lead to a wider probe into the deaths of a number of convicts in the NBP, including some high-profile inmates who allegedly died of COVID-19. This paper earlier reported that under Bantag’s term, the BuCor had recorded the highest number of prisoner deaths per year since 1990. At the onset of the pandemic, the Inquirer reported, the BuCor recorded 1,082 deaths, up by 43.5 percent from 754 deaths the previous year.

Another disturbing issue arising from the Mabasa killing was how an inmate was able to orchestrate the murder from his cell inside the NBP’s maximum security compound and, as it turned out, even from the BJMP, where the second alleged middleman was detained while awaiting resolution of a drug case. Are NBP and the BJMP officials complicit, or merely clueless and negligent, in these nefarious activities conducted under their noses? What are authorities doing to check these correctional facilities’ notorious record of corruption that has enabled prisoners access to mobile phones and resources with which to direct criminal activities outside prison walls?

In 2014, then Justice Secretary Leila de Lima led a raid on the NBP’s maximum security compound where 19 high-profile inmates involved in illegal drugs were found to be living it up in “kubols,” or small private accommodations fitted with luxurious amenities. Some of these VIP prisoners were later used as witnesses by the Duterte administration in the illegal drug case filed against De Lima.

The magnitude of corruption in the NBP was brought to the fore in 2019 over the grant of Good Conduct Time Allowance to some inmates in exchange for hefty bribes, despite its application being prohibited in cases involving heinous crimes.

The Mabasa killing is just the latest imperative on why the new administration must seriously undertake immediate reforms in the national penitentiary to prevent it from further deteriorating into a haven of criminals and killers. Solving Mabasa’s case expeditiously while cracking down on habitual offenders with an even application of the law, may also be the best way to restore credibility to a justice system burdened by too many lapses, flagrant indiscretions, and the use of personal connections.