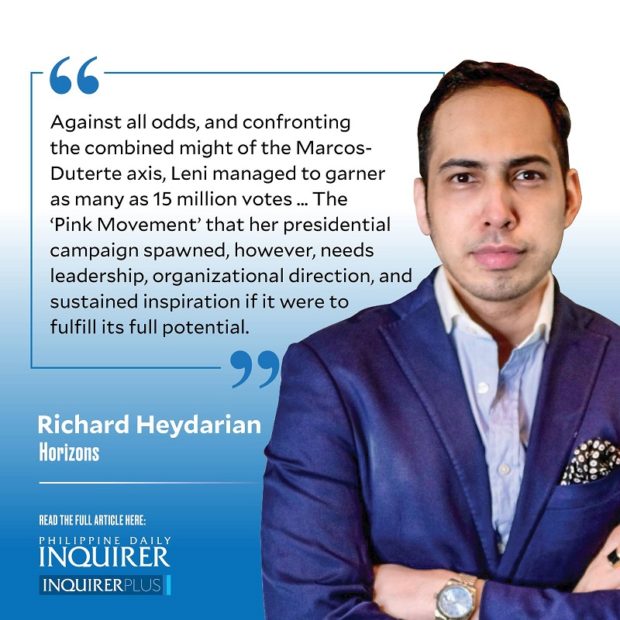 We are not putting up a strong party against the party of the President. We are not going to quarrel,” declared former president Rodrigo Duterte upon ending his short-lived political retirement. But he subtly warned, “President [Marcos Jr.] can be very sure that in the coming days we will ‘fiscalize.’ If we see something wrong, we will raise our voice, because that is the essence of our presence here.”

His deployment of the term “fiscalize” is a curious one, given its association with the legendary senator Jovito Salonga’s uncompromising resistance to the Marcos regime. Barely three months after stepping down from office, Duterte has effectively resumed his leadership of PDP-Laban, or whatever is left of the previous ruling party.

“Let’s prepare for the next election. I commit to campaign for our candidates,” the former president added, calling on his loyal supporters to focus on the 2025 midterm elections. This isn’t just powerplay. By all indications, there are growing ideological rifts between the two most powerful dynasties in the Philippines.

In his first 100 days in office, President Marcos Jr. struck a broadly independent course, which rejected the policy precepts of both his liberal as well as populist predecessors. While shunning any serious discussion of human rights and good governance issues, the new president has also eschewed his immediate predecessor’s violent drug war, escalating crackdown on progressive groups, and inartful rhetoric vis-à-vis traditional allies. Crucially, Mr. Marcos seems neither as interested in federalism nor as enamored with China as Duterte.

Such ideological faultlines were clearly on display when Vice President Sara Duterte temporarily took the reins of power during Mr. Marcos’ foreign trips to neighboring Indonesia and Singapore. As the officer in charge, the vice president echoed her father’s “law and order” doctrine during a meeting with security agencies by declaring, “We should show no mercy to criminals and terrorists.”

If current trendlines hold, a calibrated contest between the House of Marcos and House of Duterte would define Philippine politics for the foreseeable future. Each dynasty has a sufficient reservoir of political capital, organizational assets, and ethnolinguistic vote base to sustain national-level contestation for power through the decade and beyond.

And, dear reader, this brings me to the ostensibly “genuine” opposition, namely the liberal-progressive forces, which coalesced behind former vice president Leonor “Leni” Robredo’s dramatic campaign for the highest office of the land. Against all odds, and confronting the combined might of the Marcos-Duterte axis, Leni managed to garner as many as 15 million votes.

And along the way, she inspired legions of supporters all around the world. The “Pink Movement” that her presidential campaign spawned, however, needs leadership, organizational direction, and sustained inspiration if it were to fulfill its full potential.

As a private citizen, Leni deserves a soulful respite after all those years of relentless assault by trolls and “trapos.” I sincerely hope, too, that she leverages her much-deserved academic retreat in Harvard as an opportunity to reflect on her campaign and the future of the Pink Movement. A memoir or a booklet would go a long way in crystalizing both her reflections and the direction of her movement.

It goes without saying that the genuine opposition also needs to revisit some of the elitist “thought leaders” and the cabal of “data scientists” in its own ranks, especially those who spawned intellectually disingenuous and politically reckless baloneys: Think of the “Google Analytics” chutzpah. Not to mention, the ethically regrettable and intellectually suspect assaults on Pulse Asia and, by extension, reputable social scientists such as Dr. Ronald Holmes.

A Brazilian official once told me that his greatest concern with Luiz Inácio “Lula” da Silva’s bid for regaining the presidency is the lack of a genuine mea culpa from his party, which always had the best of intentions for the country but often erred in its implementation of a utopian vision. This, the Latin American official argued, was crucial to regaining the trust of the people. Perhaps, the same may also go for the liberal opposition in this country—and their manifold shortcomings in and outside the halls of power.

Whatever Leni decides as a private citizen, it’s crystal clear that she will remain central to the future of democratic struggle in the Philippines.