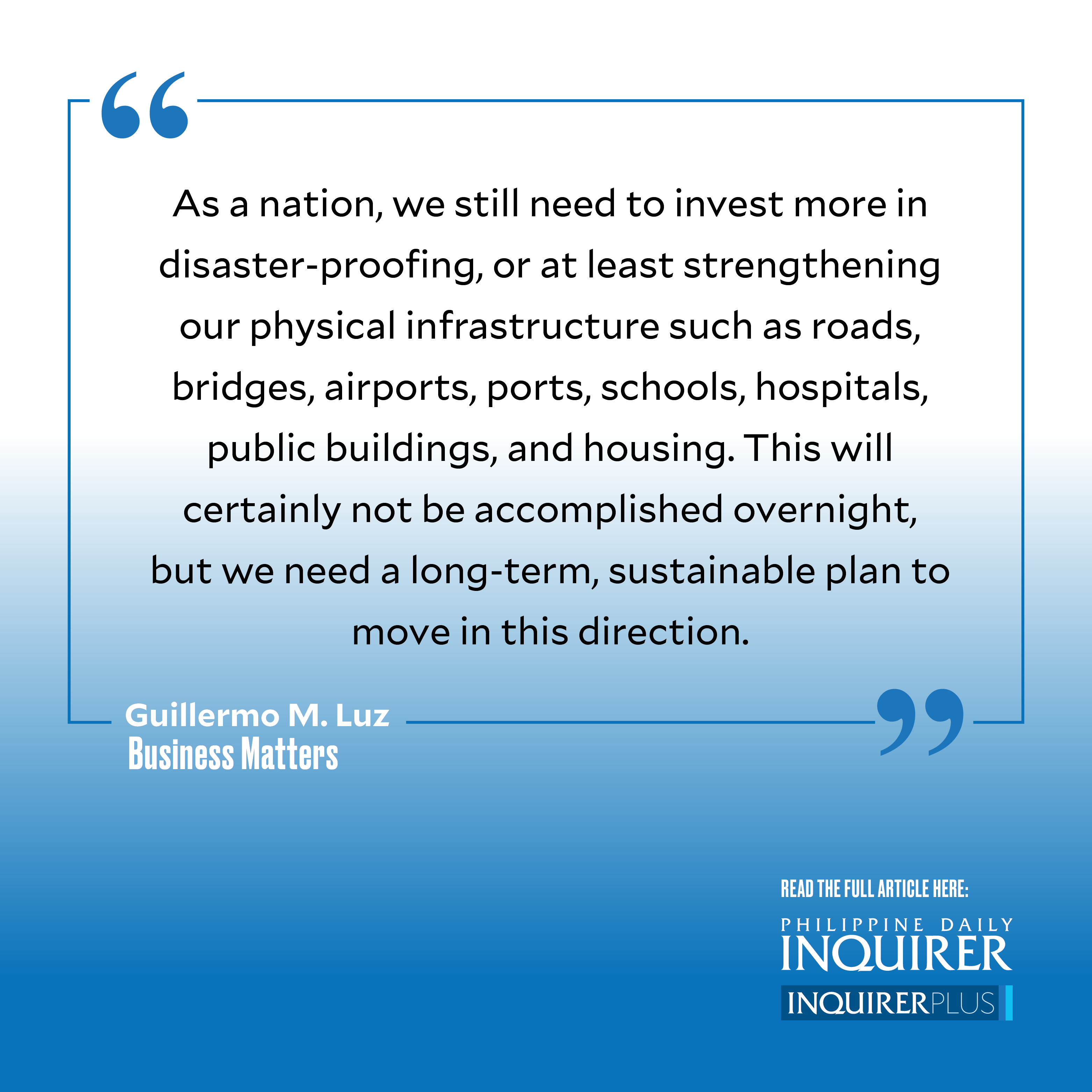 This is one global ranking list where we would not want to be ranked No. 1. The World Risk Index 2022 (released September) ranked the Philippines first in the world in risk among 193 countries worldwide (representing 99 percent of global population). India and Indonesia ranked second and third, followed by Colombia and Mexico.

What exactly is the World Risk Index, and how do we interpret its findings? It’s an annual report, which dates back to 2011, and is published by the Bündnis Entwicklung Hilft and the Institute for International Law of Peace and Armed Conflict at Ruhr University Bochum. It was jointly developed with the United Nations University Institute for Environment and Human Security.

It covers risks from earthquakes, hurricanes/typhoons, floods (both coastal and riverine), drought, sea-level rise, tsunamis, and conflict. For the 2022 report, the conceptual and methodological framework have been revised completely versus earlier years. The report now covers 100 indicators, a significant increase from its original set of 27. The 193 countries covered in the report represents the entire United Nations membership.

The risk of a natural event (say, a typhoon or earthquake) of turning into a disaster is only partly dependent on the force of the event. Risk is either worsened or mitigated by societal conditions, institutions, and structures’ ability to respond quickly and provide assistance. In general, the weaker the response infrastructure (and physical infrastructure), the greater the fall into extreme poverty, inequality, and lack of access to services such as public health and other essential services. This leads societies or communities to become more susceptible to disasters.

One cannot always control a natural event such as a storm, earthquake, or volcano, but one can address such things as poverty, hunger, education, public health, and disaster preparedness to reduce risk. Thus, the Index measures two things. The first is the exposure of a country’s population to potential impact of typhoons, earthquakes, volcanic eruptions, droughts, floods, and other natural events.

The second is vulnerability of society, which is measured in three aspects.

Susceptibility measures “structural characteristics and general conditions of societies that increase the overall likelihood of populations suffering damage,” which causes it to progress from natural event to disaster.

Coping refers to the ability to marshal resources, capacity, and action to counter the negative impact of the natural hazard or event. In short, the ability to minimize damage.

Adaptation refers to the long-term processes and strategies to anticipate changes to mitigate or avoid future adverse events and impact.

Where does the Philippines rank across these broad categories? We ranked first overall (meaning the country with the greatest risk) out of 193 countries with a score of 46.82 over 100, where a higher score reflects the most risk. We were in the top quintile (meaning worst quintile) for exposure, vulnerability, susceptibility, and lack of coping mechanisms, and in the second quintile for lack of adaptation strategies.

Clearly, we have a lot of work to do. We cannot control natural events, but we can focus on areas of susceptibility, coping, and adaptation. The Philippine Disaster Resilience Foundation was established for precisely this purpose. While we were originally organized as a response organization (meaning relief and recovery efforts) more than 10 years ago, we have added resilience as part of our strategy; and prevention, preparedness, and mitigation are now part of our toolkit. We’ve created an emergency operations center in Clark, Pampanga, which monitors and gives us advance warning for storms and volcano eruptions and enables us to deploy resources in a timely manner to places where they are most urgently needed. We’ve also focused on training organizations and people in disaster risk reduction and management. We continuously train institutions in disaster preparedness.

This, of course, is not enough. As a nation, we still need to invest more in disaster-proofing, or at least strengthening our physical infrastructure such as roads, bridges, airports, ports, schools, hospitals, public buildings, and housing. This will certainly not be accomplished overnight, but we need a long-term, sustainable plan to move in this direction.

It will take a massive public-private collaboration to get this done.