Take up the slack | Inquirer Opinion

Take up the slack 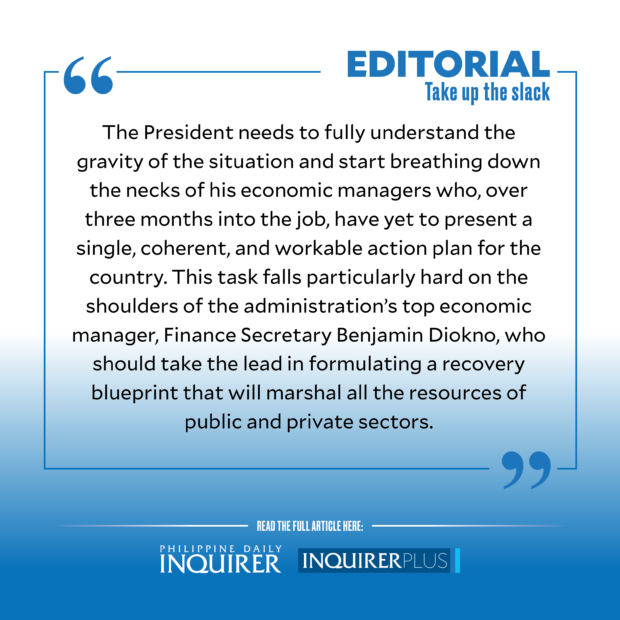 Buckle up, and keep going.”

That was the concise and urgent message International Monetary Fund (IMF) managing director Kristalina Georgieva had for the stewards of the economies of 190 nations at the end of last week’s annual meetings for the IMF and World Bank in Washington.

In her statement, the IMF chief outlined in dire and unmistakable terms that tougher times are coming for many people around the world as the outlook for the global economy dims.

Surging prices of goods and services are being experienced everywhere, but the standard response to high inflation—raising interest rates sharply—will almost surely plunge many countries into a recession, where the economy contracts and jobs are lost.

“For hundreds of millions of people, it will feel like a recession, so buckle up,” Georgieva said in a subsequent interview with Bloomberg.

The Philippines’ top economic managers flew to the US to attend those annual meetings, and we hope that they were paying attention to the alarmed and pessimistic mood that, according to reports, pervaded the event as policymakers struggled to come up with moves to defend against the greatest global economic crisis since the early 1980s.

The country’s current economic situation is, to say the least, challenging. Its latest inflation rate stands at 6.9 percent—the highest it’s been in four years, when the country was grappling with a rice shortage. The culprit is a combination of supply chain problems and logistical bottlenecks that were exposed during the pandemic, plus the spike in global energy prices caused by Russia’s invasion of Ukraine earlier this year.

The high inflation has also made peso-denominated financial assets less attractive to hold, resulting in investors shifting their funds to the dollar. This has caused the peso, along with other currencies around the world, to depreciate against the US greenback. To combat this, policymakers have to raise interests to match the aggressive rate hikes of the US central bank, but doing so will result in lower Philippine economic growth. And lower growth means fewer jobs for Filipinos at a time when they need employment the most to cope with rising consumer prices.

At the same time, the government has to contend with the mountain of debt left behind by the previous administration, accumulated both before and during the pandemic. There are no easy paths out of the current situation.

The good news is that the Philippines has a long history of navigating economic crises and coming out stronger at the other end.

In particular, the country’s experience with the sovereign debt default of the early 1980s has helped it avoid future pitfalls that would have otherwise resulted in a repeat of the crippling crisis. That experience was so humiliating and humbling that the country’s senior policymakers resolved never to have it happen to the country again.

And to the credit of the country’s public and private sector leaders, they have been true to their vow, with lessons learned from that debt debacle being successfully applied to guard against direr consequences in the wake of the 1997 East Asian financial crisis and the 2008 global financial crisis.

But today, the Philippines is just coming out of the deepest economic contraction since World War II, spawned by the pandemic and aggravated by the effects of Russia’s invasion of Ukraine on inflation. Together, these elements easily make the current environment the most challenging among all the crises the country has faced in recent history.

The President needs to fully understand the gravity of the situation and start breathing down the necks of his economic managers who, over three months into the job, have yet to present a single, coherent, and workable action plan for the country.

This task falls particularly hard on the shoulders of the administration’s top economic manager, Finance Secretary Benjamin Diokno, who should take the lead in formulating a recovery blueprint that will marshal all the resources of public and private sectors. After all, other departments in the economic cluster, as well as big businesses, look to him for guidance as to how the nation should face these challenges.

What is needed is strong leadership from the administration on the economic front, and it behooves President Marcos Jr. to make sure his department heads deliver. Scold them if he must. Replace the underperforming ones if he must. The country, facing its direst crisis in a generation, deserves the best from its leaders. There is simply no room for slackers.

Indeed, Filipinos need to heed the call of the IMF chief to “buckle up.” And our economic managers need to “buckle down” to work.