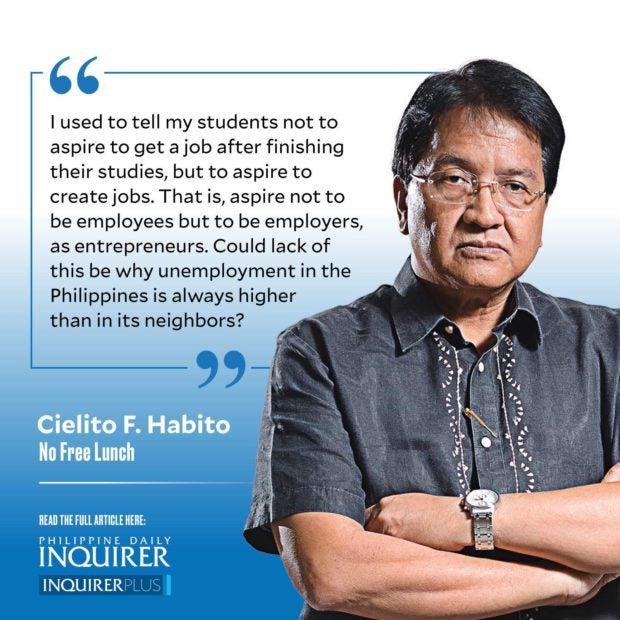 I used to tell my students not to aspire to get a job after finishing their studies, but to aspire to create jobs. That is, aspire not to be employees but to be employers, as entrepreneurs. Could lack of this be why unemployment in the Philippines is always higher than in its neighbors?

Consider the numbers: our unemployment rate in 2021 was 7.8 percent, vs. Malaysia’s 4.7, Indonesia’s 6.5, Thailand’s 2.0, Singapore’s 2.7, and Vietnam’s 3.1 percent. Ours has always been markedly higher for as long as I can remember, since at least the 1990s, when I began regularly examining comparative Asean economic data. Our Labor Force Surveys (LFS) also show college graduates making up 20-30 percent of the jobless. As of last August, it was 30.3 percent, or nearly a third! Are Filipinos less entrepreneurial than their Asean counterparts? Do too many of our young simply aim to find a job (and often end up unable to), rather than aspire to become job-creating entrepreneurs?

In August 2015, Congress passed Republic Act No. 10679, or the Youth Entrepreneurship Act, declaring it state policy to “establish, maintain, and support a complete, adequate, and integrated system of education and training to encourage the entrepreneurial spirit among our youth as well as support and promote the growth of young entrepreneurs nationwide.” According to LFS data, the country’s labor force grew by 5.2 million in the six years hence. But the “self-employed with employees” category in the LFS data across all age groups grew by a mere 50,000—less than one percent of new labor force entrants. Even less of these would be young new entrepreneurs. It would seem, then, that the law has failed to make a dent in the overall picture. What happened?

For one thing, it took two years for the law’s implementing rules and regulations to be approved. It took another two years for the Department of Education (DepEd) as lead agency to conduct a consultative meeting with education partners and stakeholders on how to implement the law. The interagency Entrepreneurship Education Committee that the law created to craft a national youth entrepreneurship action plan does not appear to be functioning. It’s not clear from past direct inquiries made with DepEd officials if the body has met at all. If the government itself sees little value, let alone urgency, in implementing a law crucial to our successor generation, what can be in store for them?

It is welcome that private sector groups have been pushing various high-profile initiatives to support young entrepreneurs via mentoring and financing, but in truth, their reach and coverage have been rather limited relative to the actual need. These mostly appear to involve tech start-ups or ventures pitched by college students, usually from prominent universities. But what about our rural youth, including those who have dropped out of school? It’s incumbent on the government to have a clear and coherent plan for them, too. Fostering entrepreneurship spans all walks of life in all levels of schooling, but also goes beyond schools. It’s best done via partnerships with schools, businesses, civil society, and churches. Global think tank ODI lists five lessons for strengthening youth entrepreneurship, and foremost is getting families and communities on board, stressing that “finding ways to engage and gain support from families and communities is vital.”

“Entrepreneurship” should not only be seen in the narrow context of a business enterprise as most understand it, but in its broader meaning as defined by Harvard Business School professor Howard Stevenson: the pursuit of opportunity beyond resources controlled. An entrepreneur is thus a creator, leverager, and innovator—one who expands the realm of possibilities from a limited set of initial circumstances. Our young should be able to create jobs and as they do, create wealth well beyond its material and economic meaning, but also measured in human welfare, natural and ecological integrity, and uplifting social relationships.

Done right, fostering youth entrepreneurship would be our key to a future untrammeled by the crisis in health and education dragging us down today.