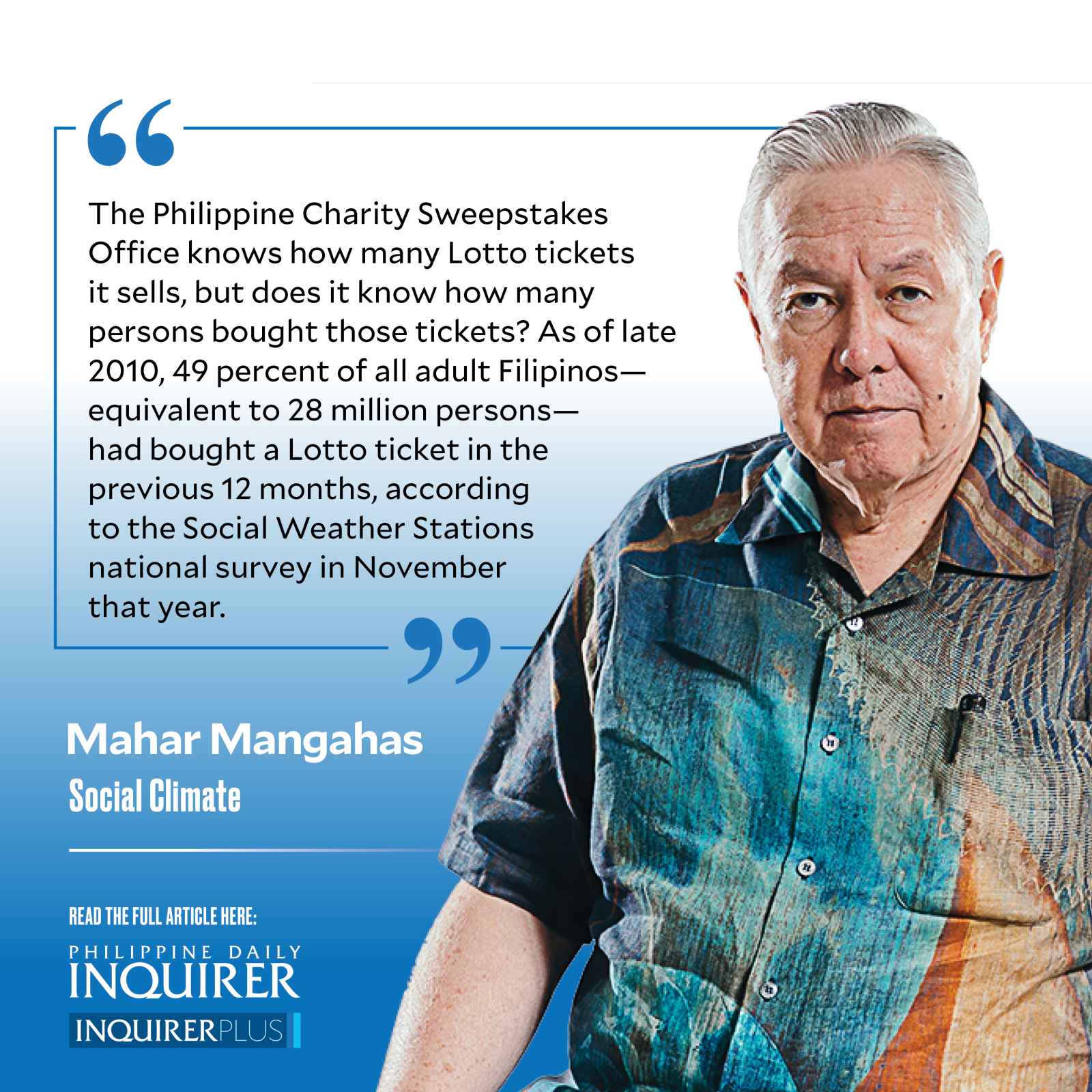 The Philippine Charity Sweepstakes Office (PCSO) knows how many Lotto tickets it sells, but does it know how many persons bought those tickets?

As of late 2010, 49 percent of all adult Filipinos—equivalent to 28 million persons—had bought a Lotto ticket in the previous 12 months, according to the Social Weather Stations national survey in November that year.

The percentage of adult Filipino Lotto players had been 30 percent when first surveyed in October 1999. It dropped to 23 in July 2000, and then recovered to 32 in May 2009, before hitting 49 in 2010. Lotto has always been the most popular form of gambling. Could it be even more popular now?

The context of these surveys was the “jueteng-gate” scandal of late 1999, and the public debates, for some years, as to whether jueteng ought to be legalized. The survey questions on gambling were unsponsored and were asked on SWS’ own account. They’ve been publicly reported before (for instance, “Moral attitudes against gambling hardly affect gambling behavior,” www.sws.org.ph, 12/8/1999). All raw data are permanently archived for Philippine social history; sponsored items are also preserved for research since embargos expire after three years.

“Kursunada” in choosing Lotto numbers. To me, the fact that there were as many as 433 winning tickets in last Sunday’s Lotto 6/55 draw is due to the sheer beauty of the winning combination, 09-45-36-27-18-54, as reported, I presume, in the sequence of emergence from the PCSO’s tambiolo. (Since the sequence does not matter for winning in Lotto, the set of numbers is called a combination; if a sequence matters, it is called a permutation.)

The numbers in the winning 10/1/2022 combination are multiples of 9: they are 9×1, 9×5, 9×4, 9×3, 9×2, and 9×6 respectively. It’s a beautiful set of numbers, and I think so many players chose it out of kursunada with number 9. Whatever the set’s beauty, its chance of winning was, is, and will always be: 1 divided by 28,989,675. The denominator is the exact total number of combinations of six items—they don’t have to be numbers; they could be names from a phone book—that can be randomly drawn from a population of 55 distinct items. An ugly combination and a beautiful combination have the same chance to win, so why not bet on the beauty?

Computing the expected number of winners needs a theory of ticket-choice that goes beyond mere random selection by unrelated players from the 28.99 million possible tickets. Suppose a social club recommends a specific ticket—kursunada lang—for its members to buy on the club’s anniversary day, the idea being that the entire club will benefit from a win? Suppose this practice gets popular? Then the pool of purchased tickets will contain many clusters of identical combinations, raising the probability that a cluster, rather than a single individual, will win.

Of course, all of this assumes honest gaming. Honesty pays off because suspicious games lose players, and there’s fun in the play, not just in the winning. Follow the tried and true: use a clean deck, take turns in dealing, shuffle the cards thoroughly, have the cards cut on the dealer’s right, and deal to the left.