Who watches the watchmen? | Inquirer Opinion

Who watches the watchmen? 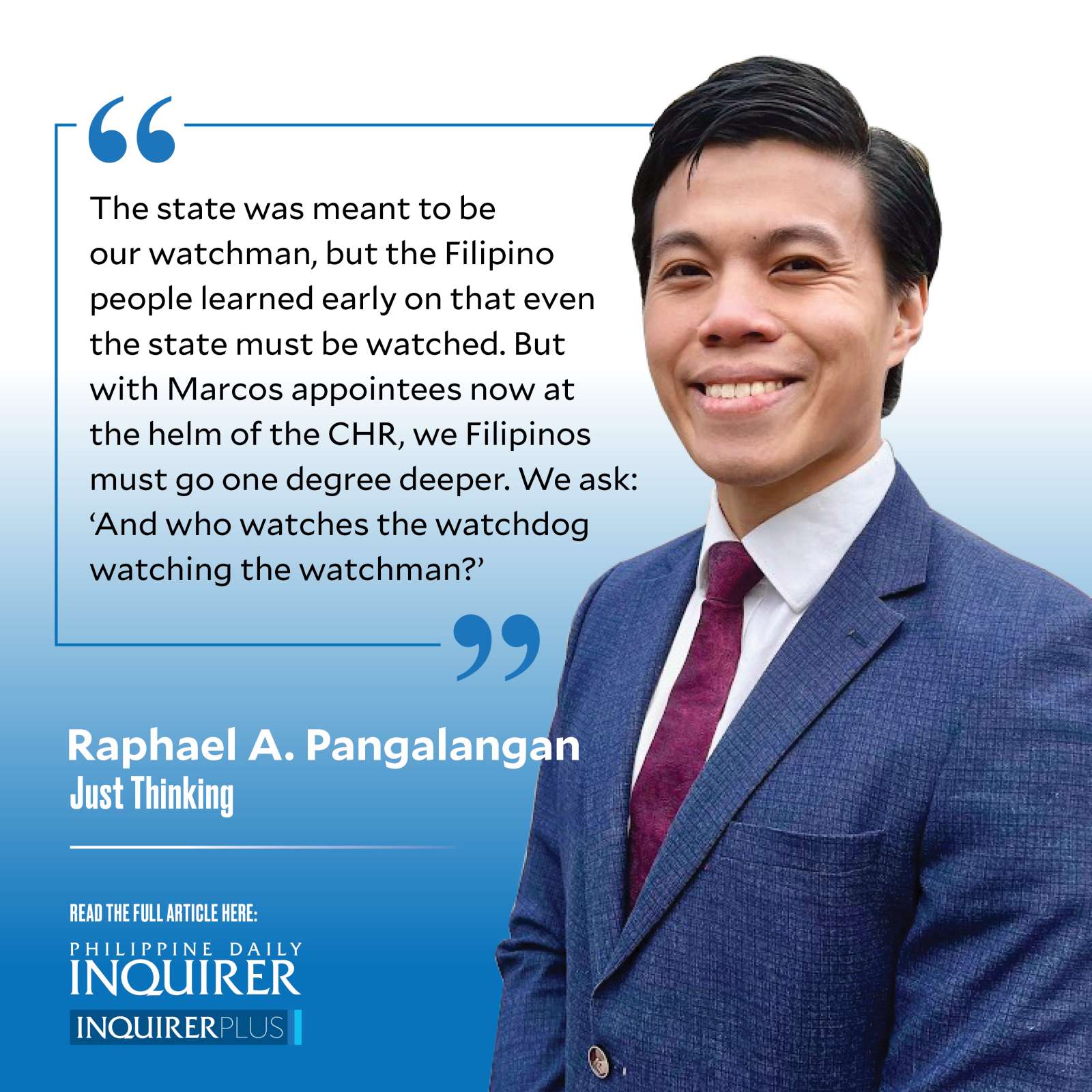 On Oct. 15, 1986, the Honorable Cecilia Muñoz-Palma—the president of the 1986 Constitutional Commission—gave the closing remarks at the commission’s final session.

That juncture was described by the commission president herself as “a beautiful irony which cannot be overlooked.” And indeed it was. There, in the Batasang Pambansa (now the seat of the House of Representatives)—within the very same hall from which the path to “constitutional authoritarianism” was paved—a new constitutional order that valued human rights, the rule of law, and democracy was crafted and formed.

In drafting what was then formally referred to as the “1986 Constitution,” the members of the ConCom were well-aware of the social contractarian claim. The people rely on the state to be our watchman in the night, keeping us safe from unfathomable evils as our consciousness drifts into vulnerable slumber. The government is necessary to escape a life that is “nasty, brutish, and short.”

But atop the Hobbesian view, the ConCom likewise acknowledged the Juvenalian dilemma. Like Juvenal, the ConCom saw the government as both law enforcer and lawbreaker. Indeed, the past decade and a half had shown that the government responsible for law and order was itself the very source of law abuse and disorder.

The solution to this predicament came in the form of the Commission on Human Rights (CHR). Constitutionally created in light of the harrowing abuses of the Marcos dictatorship preceding it, the CHR—while a government body—was not created to be an attack dog for the state but a watchdog against state abuse. Though the chair and commissioners of the CHR are appointed by the President, their mandate is independent therefrom.

But, alas, for every happy irony, there awaits an ugly twist.

Last Tuesday, about two weeks shy of the 36th anniversary of Honorable Muñoz-Palma’s remarks, President Marcos Jr. appointed the new chair and one commissioner of the Sixth Commission of the CHR. The very commission created in the wake of the Marcos dictatorship—a one-man rule so ruthless that it called for a complete overhaul of Philippine constitutional order—is now led by Marcos appointees.

The irony cannot be lost on even the most staunch Marcosian supporter. But perhaps he would argue that the appointment of CHR members by Mr. Marcos is nothing out of the ordinary. And indeed, he would be right to! After all, Executive Order No. 163, s. 1987, declaring the effectivity of the CHR is clear: All members of the CHR “shall be appointed by the President for a term of seven years.” Notably, that CHR member’s term is no random number. It was deliberately designated at seven years so as to avoid a situation where the CHR commissioners’ terms would seamlessly embrace the six-year term of the president that appointed them.

But lo and behold, the cruel ironies continue! And now, it is father time that is to blame. As fate would have it, for the first time since the early ’90s, the term of the members of the CHR encompasses the entirety of the appointing authority’s presidential term! This means that, save for its few early months, in the following six years of the Marcos Jr. presidency, the guard will have been handpicked by the guarded himself.

The state was meant to be our watchman, but the Filipino people learned early on that even the state must be watched. But with Marcos appointees now at the helm of the CHR, we Filipinos must go one degree deeper. We ask: “And who watches the watchdog watching the watchman?”

The buck has to stop somewhere. And it stops with us.

To borrow from Claro M. Recto, the president of the constitutional convention of 1935: “[T]o drive away all danger of anarchy as well as dictatorship […] it is necessary that both the government authorities and the people faithfully observe and obey the Constitution.”

Civil society must keep a watchful eye on the watchmen and our watchdog alike. It is up to each of us to keep our government in check and to hold abuses to account. If not through the courts of law, then at the least in the courts of public opinion.

So again I ask: Who will guard the guards themselves?