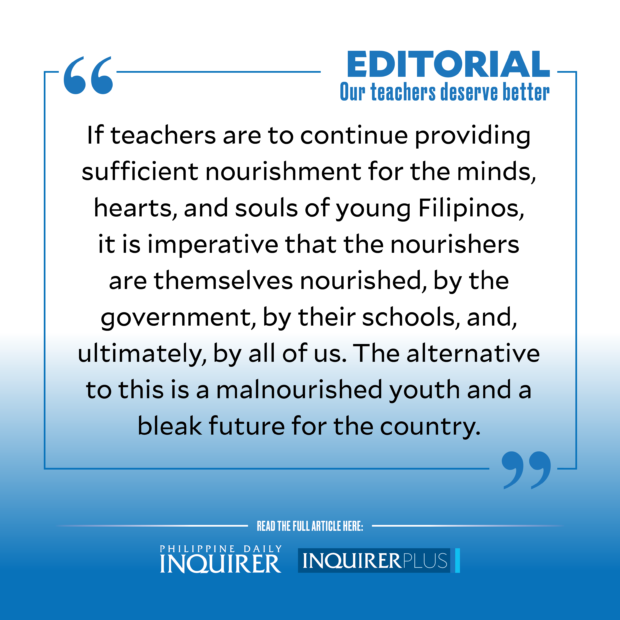 A school is like a parent who forms the student. And at every school’s core is the teacher who nourishes each pupil’s mind, heart, and soul with knowledge and wisdom.

On paper, the numbers describing the Philippines’ educational system look impressive. The country has almost 900,000 public school teachers in all levels of basic education. With a little over 28 million students enrolled for this year, this gives each class an average ratio of one teacher for every 31 students.

For most regions, data from the Department of Education (DepEd) show that most teachers are assigned from 24 to 26 learners—far better than the maximum one-to-40 proportion that’s said to be the upper limit of a classroom environment that’s conducive for learning.

Across the country, there are over 60,429 institutions offering instruction at various levels of basic education, showing only a slight reduction in number from the almost 62,000 schools logged before the COVID-19 pandemic.

DepEd’s data also show that 98 percent of all public schools in the country have electricity, while 95.8 of them have access to water, while over 80 percent have “functional computers.”

And most importantly, the biggest slice of the pie of the government’s annual budget always goes to the education sector, as mandated by law.

By any measure, these numbers are impressive, especially for a country like the Philippines which has to contend with economic, geographic, and demographic challenges, among others, when it comes to funding the country’s school system.

But the number are, for the most part, impressive only on paper. The realities on the ground paint a less rosy, more sobering picture.

At the core of the problem is the sometimes unreasonable burden that the educational system lays on the shoulders of the Filipino teacher.

While official statistics show a more-than-ideal teacher-student ratio, it is not uncommon to read reports about the ratio reaching as high as 90 students being assigned to a single educator, especially in more impoverished, less developed areas of the country.

These very same teachers are also expected to nurture these very same students using inadequate facilities, not least of all is the perennial shortage of classrooms which has been aggravated by the ongoing public health crisis that requires pupils—previously packed together like sardines in a can—to sit at least one meter apart for safety reasons.

The pandemic has also forced many teachers to innovate in terms of teaching methods, shifting to online instruction with often insufficient computer resources being experienced on both the part of the teacher and the pupil. While there are those who are fortunate enough to live in areas with decent internet connectivity, most teachers and students also suffer indirectly at the hands of national or local governments responsible for acquiring overpriced and substandard digital devices using public funds.

Adding to these challenges are the extracurricular burdens often imposed on school teachers around the country by the government, with many regularly serving as poorly compensated poll workers during the national and local elections, on top of the administrative tasks they have to fulfill as part of their daily routines.

Finally, and perhaps most alarmingly, the country’s public school teachers are paid insufficiently for the tasks they are expected to perform. Most are said to receive monthly salaries of anywhere between P25,000 and P30,000 a month. As such, many are forced to earn additional income through “side hustles” that distract them from their primary duties.

The people at the core of the educational system that serves as the “nourishing mother” of Filipinos deserve better.

They deserve the best facilities that the government can buy, the best continuing education to keep their skills as teachers sharp and, it goes without saying, the best possible wage that will afford them a decent standard of living befitting their status as shapers of the nation’s future.

No less than the Philippine Constitution mandates that “the State shall assign the highest budgetary priority to education and ensure that teaching will attract and retain its rightful share of the best available talents through adequate remuneration and other means of job satisfaction and fulfillment.”

If teachers are to continue providing sufficient nourishment for the minds, hearts, and souls of young Filipinos, it is imperative that the nourishers are themselves nourished, by the government, by their schools, and, ultimately, by all of us.

The alternative to this is a malnourished youth and a bleak future for the country.