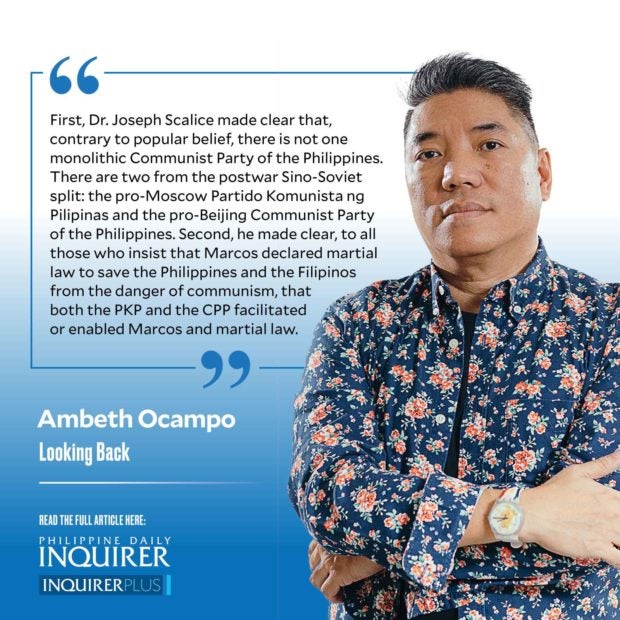 Trolls on my page have a new game. To bait and distract me from the material in Ferdinand Marcos Sr.’s diaries, they dare me to write about the Plaza Miranda Bombing, Hacienda Luisita, Mendiola Massacre, and even unmask the mastermind of the Ninoy Aquino assassination. We know where this is headed—link Ninoy with Jose Ma. Sison and the Communist Party of the Philippines. That is old hat. New research suggests that Marcos was also associated with the communists, but with the older Partido Komunista ng Pilipinas.

There is no need to reinvent the wheel since Dr. Joseph Scalice has documented it all and written it up beautifully in the 893-page dissertation, “Crisis of Revolutionary Leadership: Martial Law and the Communist Parties of the Philippines, 1959-1974” (University of California, Berkley, 2017). Coming from a generation known as the “Marcos babies” who came of age during martial law, reading Scalice’s dissertation made the scales and blinders on my eyes fall off.

First, he made clear that, contrary to popular belief, there is not one monolithic Communist Party of the Philippines. There are two from the postwar Sino-Soviet split: the pro-Moscow Partido Komunista ng Pilipinas (PKP) and the pro-Beijing Communist Party of the Philippines (CPP). Second, he made clear, to all those who insist that Marcos declared martial law to save the Philippines and the Filipinos from the danger of communism, that both the PKP and the CPP facilitated or enabled Marcos and martial law.

Going through the physical copies of the pre-martial law Chronicle in the Lopez Museum before the pandemic made me appreciate the back-breaking research Scalice put into his thesis. With the exception of the librarians and archivists who indexed the Philippine Radical Papers in the UP Main Library, Scalice is probably the only historian who has gone through each and every item from the boxes. Not content with that, his data was cross-checked and contextualized by Philippine daily newspapers and weekly magazines from 1969-1974. Scalice deserves a medal, not ad hominems, not libelous assertions that he is a CIA agent, not veiled threat of physical harm or assassination by being labeled a “Trotskyite.”

Scalice devoted 72 pages of his thesis to the Plaza Miranda bombing with a wonderful title “Three Grenades in August,” a title thoughtfully crafted as Barbara Tuchman’s book “The Guns of August” on World War I. Many people reading this today will be surprised to note that Aug. 21, declared a holiday since 2004 to commemorate the assassination of Ninoy Aquino in 1983, is actually the same date as the Plaza Miranda bombing in 1971 that prompted Marcos to suspend the writ of habeas corpus, thus starting the chain of events leading to the declaration of martial law in September 1972.

Three grenades were thrown onto the stage where a Liberal Party campaign was ongoing. Ninoy Aquino was on his way to Plaza Miranda when the grenades went off, killing nine and wounding over a hundred. Things could have been worse, only two of the three grenades exploded. Details of the bombing, including gruesome pictures, can be found in the newspapers of the time. When the smoke had cleared and the wounded taken to the hospital, the blame game began: the Liberal Party blamed Marcos. The CPP blamed Marcos. Marcos blamed the CPP.

Investigations were undertaken and, for a while, blame shifted to Manila Mayor Antonio Villegas who was said to harbor a grudge against LP for fielding Ramon Bagatsing against him. Villegas, through the loyal Alfredo S. Lim, sourced the bombers from prison. If caught, these criminals had an airtight alibi. Ninoy was also blamed because he was absent from the LP event.

Scalice states that PKP bombings were known to Marcos and the military; their modus was to scare, not to harm. Plaza Miranda was different, it killed and injured. Despite the denials of Jose Ma. Sison, three testimonies are cited by Scalice: Central Committee member Noli Collantes, who surrendered in 1972, testified that the CPP was responsible, Joma ordered the bombing, Ninoy was complicit; Ruben Guevarra pointed to Joma and the CPP in 1981; Victor Corpuz was present when Sison plotted the bombing. Case closed until compelling contrary evidence turns up.