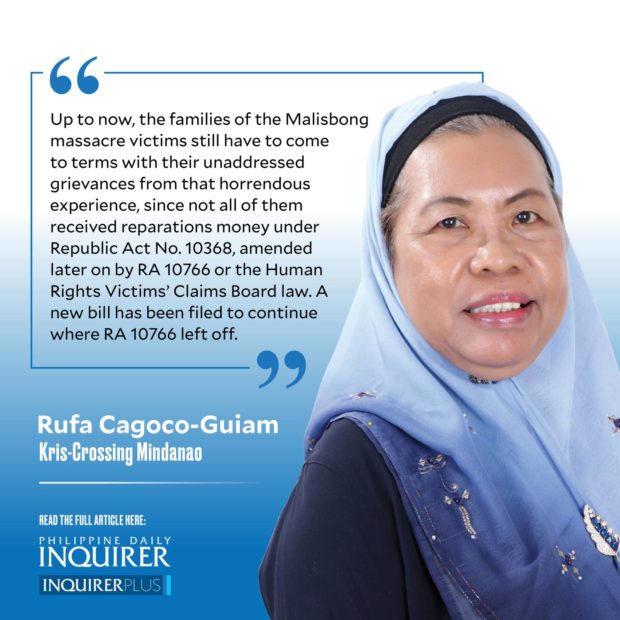 The Malisbong massacre in Palimbang town (Sultan Kudarat province) was just one of the atrocities committed against Magindanawn men and women during the dark years of martial law that the late President Marcos Sr. declared 50 years ago. But it was one of the most emblematic cases of human rights violations: more than 1,000 people were killed there. This is not to mention cases of rapes and other forms of gender-based violence committed against the women in that community during that fateful month of September 1974.

Up to now, the families of the Malisbong massacre victims still have to come to terms with their unaddressed grievances from that horrendous experience, since not all of them received reparations money under Republic Act No. 10368, amended later on by RA 10766 or the Human Rights Victims’ Claims Board law, as mentioned in last week’s column. A new bill in the House of Representatives (House Bill No. 3505) has been filed to continue where RA 10766 left off. This proposed bill also seeks to provide nonmonetary benefits as well, like social, educational, and health services to conflict-affected communities.

This is a welcome development for the victims of human rights violations not only in Malisbong but in other areas as well.

For the Bangsamoro autonomous region and other areas in the country slowly recovering from long periods of state-sponsored violent conflict, national initiatives are needed to address legitimate grievances and historical injustices of victims. Such initiatives can be formalized under a government-organized National Transitional Justice and Reconciliation Commission for the Bangsamoro (NTJRCB). This was the main recommendation of the series of studies conducted through the auspices of the now defunct Transitional Justice and Reconciliation Commission (TJRC), which was created under the Joint Normalization Annex of the Comprehensive Agreement on the Bangsamoro signed in March 2014 by the Government of the Philippines and the Moro Islamic Liberation Front. From 2016 to 2017, the TJRC formally turned over to the Philippine government the reports from the different studies it conducted in the core and peripheral areas of the present Bangsamoro Autonomous Region in Muslim Mindanao (BARMM). Sadly, until now, after two presidents (Benigno Aquino III and Rodrigo Duterte) and several draft bills in creating the NTJRCB, no such mechanism has been created.

A national transitional justice mechanism is built on four major pillars: 1) the right of the public to know the truth surrounding the violent atrocities committed by state military agents; 2) the right of the victims and their survivors to justice; 3) the right to reparation; and 4) the guarantee of nonrecurrence.

Under the first pillar, a state-legislated Truth and Reconciliation Commission is a requirement to ferret out the truth about who the perpetrators were and what exactly happened to the victims of state-sponsored violence. The second pillar requires victims or their families and survivors are given the right to access justice for them, to ensure that perpetrators are held accountable for their actions. The third pillar is the grant of reparations to the victims and their families or communities, in both money and nonmonetary forms, to ensure that victims’ families are compensated and provided services they were supposed to enjoy before they were victimized by state agents. The fourth pillar (guarantee of nonrecurrence) ensures that appropriate and stringent government reforms are instituted and carried out, especially among security sector agents (police, armed forces, and quasi-security agents), so that they will uphold the law and no longer commit acts of impunity.

When all these are implemented successfully, communities recovering from conflict will slowly transition to a future of durable peace and higher levels of social cohesion.

In his speech before the United Nations General Assembly in New York last month, President Marcos Jr. noted that his administration will respect human rights and uphold the rule of law. His eloquently delivered words were sweet music to international donors, especially United Nations agencies.

Those words are sweet to our ears, too. But since it was the President’s father that declared martial law and caused atrocities committed against thousands of Bangsamoro victims, the creation of a national transitional justice mechanism might just be asking for the moon.