The five doors to confidential corruption 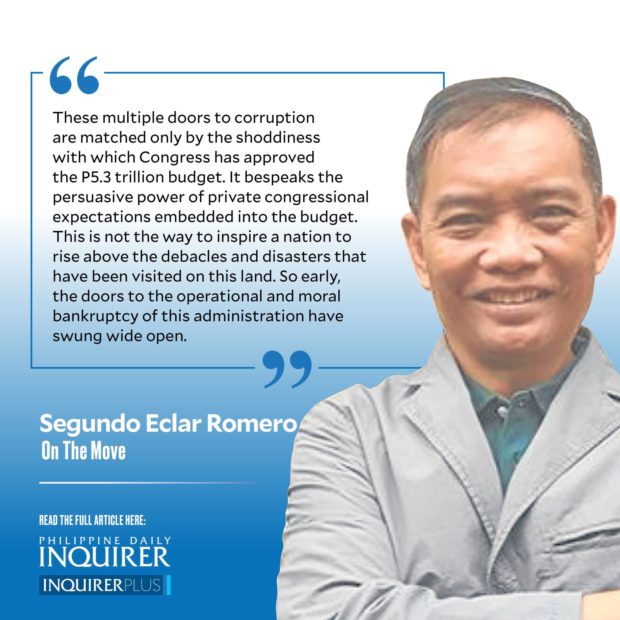 Robert Klitgaard famously defined corruption as monopoly plus discretion minus accountability (C=M+D-A). Confidential and intelligence funds fit these conditions to a T. The country has just tread onto this slippery slope that will be catastrophic for the nation, already in the throes of an unprecedented confluence of natural and man-made disasters. As if the Pharmally and Department of Education (DepEd) scams are insufficient signals that the government’s transparency and accountability have collapsed in the dark night of the Duterte administration.

There are five doors to this slippery slope of confidential corruption: Door 1 is the absence of a well-thought-out strategy for using the funds by an administration that is so new to power they do not have a real, tangible program of government yet, except for the broad strokes given in exhortatory presidential speeches. Ballpark estimates in the billions for fuzzy tasks that could not be verbalized commensurate to the gargantuan amounts bandied about. The Office of the President wants P2.25 billion in intelligence funds and P2.25 billion in confidential funds.

How disproportionate this is to the total enterprise of democratic and constitutional governance becomes clear when we realize that, as Rep. Edcel Lagman points out, the Department of Human Settlements and Urban Development charged with the critical housing and shelter program of the country gets only P1.4 billion, the Civil Service Commission that manages the quality and qualifications of the entire government bureaucracy gets only P1.9 billion. The Department of Tourism, which needs infrastructure and service intensification to reach the tipping point to even out the agricultural and industrial sector setbacks, is getting only P3.5 billion. The bastion of participatory democracy, the Commission on Elections, gets only P4.9 billion, while the bastion of public accountability, the Office of the Ombudsman, gets only P4.7 billion.

Compounding this worrisome development, the Vice President is seemingly trying to keep up with the President. She wanted P650 million in confidential funds for the Office of the Vice President (OVP) and the Department of Education. The broad strokes justification for DepEd confidential funds is lame: “The success of a project, activity or program really depends on very good intelligence and surveillance because you want to target specific issues and challenges.” The CF and IF will fund a virtual program of campus surveillance and promotion of political uprightness on school campuses to address problems like sexual grooming of students by teachers, youth recruitment to terrorism, and drug use among DepEd workers. This approach calls to mind the Morality Police in Iran and the Taliban in Iraq.

Door 2 is the cabal of interested and influential parties with selfish personal interests awaiting the release of confidential and intelligence funds. If Janet Lim Napoles could navigate and dodge the accountability control mechanisms of government, what happens when these control mechanisms are officially nonapplicable from the start? All types of sophisticated scammers and syndicates will swarm over the Office of the President, the OVP, the DepEd, and elsewhere in government there are parked CFs and IFs.

Door 3 is the unexamined agency system for approval, disbursement, and reporting for confidential and intelligence funds. There must be ultimate oversight by Congress, but it is worrisome when Lagman laments that “The Commission on Audit informed this chamber that although it makes a post-audit of confidential and intelligence funds disbursement, it could not disclose the results of such audits because of the nature of confidentiality of said funds.”

Door 4 refers to the evidence of the results, variously packaged into project outputs, program outcomes, and societal impacts. The results will be invisible, intangible, mythical, or occult, as befits the purported clandestine nature of the funded activities. The sheer amount of the CFs and IFs will involve a huge network of individuals, the larger the more difficult to exact accountability.

Door 5 refers to the profligacy and impunity that anticipatory deodorant mechanisms will beget. The confidential funds themselves can be used to erase accountability and public perception of impropriety. Worse, they can defeat congressional attempts at oversight and eventually the short arm of the justice system.

These multiple doors to corruption are matched only by the shoddiness with which Congress has approved the P5.3 trillion budget. It bespeaks the persuasive power of private congressional expectations embedded into the budget. This is not the way to inspire a nation to rise above the debacles and disasters that have been visited on this land. So early, the doors to the operational and moral bankruptcy of this administration have swung wide open.