Taking Marcos at his word 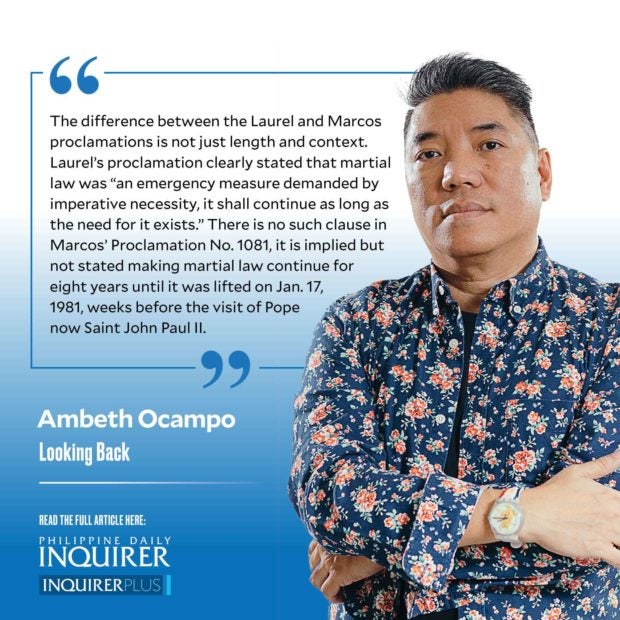 The difference between the Laurel and Marcos proclamations is not just length and context. Laurel’s proclamation clearly stated that martial law was “an emergency measure demanded by imperative necessity, it shall continue as long as the need for it exists.” There is no such clause in Marcos’ Proclamation No. 1081, it is implied but not stated making martial law continue for eight years until it was lifted on Jan. 17, 1981, weeks before the visit of Pope now Saint John Paul II. The pope’s visit marked two firsts: It was the first beatification outside the Vatican, and it was the first step toward Ruiz’s canonization in 1987 as the first Filipino saint.

Martial law was only lifted on paper to get the pope’s blessing. Marcos continued to rule until 1986 under two dispositive provisions in the document terminating martial law. First, the Armed Forces of the Philippines remained on call to “suppress lawless violence, insurrection, rebellion and subversion” as defined by Marcos or his subordinates. The writ of habeas corpus remained suspended in Mindanao, allegedly “upon request of the residents.” Second, invoking the Constitution, Marcos declared: “all proclamations, orders, decrees, instructions, and acts promulgated, issued or done by the incumbent President constitute part of the law of the land, and shall remain valid, legal, binding, and effective even after the lifting of martial law.”

“One year ago today, I signed Proclamation No. 1081 placing the entire country under martial law. As President of the Republic, I saw it as my clear and inescapable duty to meet the rebellion against our duly constituted government, the anarchy in our social life, the paralysis of the economy, the disintegration of our bureaucracy. With God’s clear light and our people’s vigorous support, we involved the full powers of the Constitution to meet the threats to our Republic and build a new society.

“… A year ago, we faced a crisis of survival. We have surmounted the crisis. The man who feared to walk his own street has been freed from his fears; he can now walk his city … The man whose father tilled another man’s land will no longer sire children who will till the land of the landowner’s sons. Together they will have their own lands to till … The armed force of the rebellion has been crushed … The national crime rate has dropped. The once-troubled area of Mindanao will henceforth be a showcase of harmonious work. In the economy, we have set new records of growth … international reserve stood at $739 million, the highest in our history … balance of payments showed a surplus of $612 million … stock market transactions multiplied 10 times in volume … Mining and oil exploration have exploded into profitable activity … we have been able to ease our debt-servicing burden and to generate more development capital through foreign loans…”

Taking Marcos at his word: if by 1973 the crisis that justified martial law was surmounted, if the New Society realized “almost miraculous achievements,” why did martial law continue until 1981?