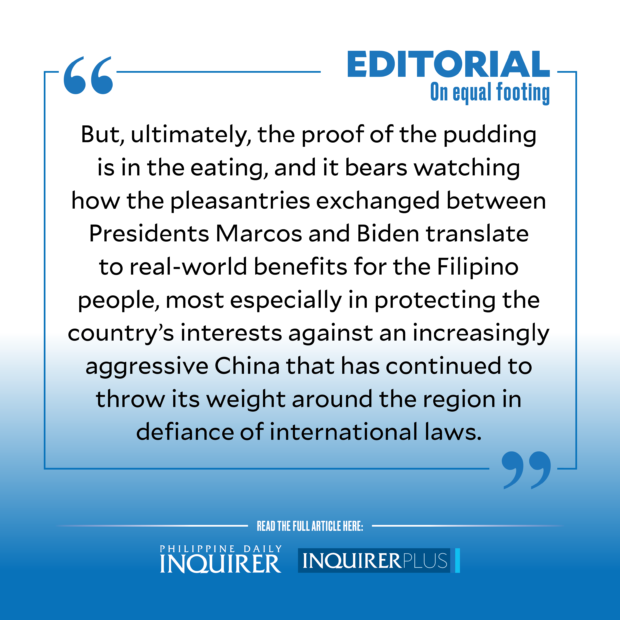 In October 2016, then President Rodrigo Duterte stunned the nation and the international community by announcing the Philippines’ split with the United States, doing so no less while on a state visit to China, while giving a speech to incredulous Filipino officials businessmen and ecstatic Chinese counterparts in Beijing’s Great Hall of the People.

What a difference six years makes.

Last week, President Marcos Jr. met with US President Joseph Biden and—to the profound relief of many Filipinos worried by the country’s lurch toward the Chinese sphere of influence in recent years—reaffirmed the alliance between both nations.

Unlike previous times when vague reassurances would be given about both nations’ shared security interests, this time around no less than the US President stated in unequivocal terms that America had an “ironclad commitment to the defense of the Philippines.” And since there is only one country at present that is pressing its weight against Philippine maritime boundaries, there’s little doubt as to which country he was referring to.

On the surface, shifting allegiances back to the US wasn’t a difficult decision to make for Philippine officials. Even while professing its friendship and goodwill toward the Philippines, China showed no signs of backing down from its aggressive territorial claims in the South China Sea, in defiance of international laws. The whole situation smacked of doublespeak: saying one thing, while doing the complete opposite.

In return for the previous administration’s slavish behavior toward China, the Philippines’ most visible benefits came in the form of two four-lane bridges across the Pasig River, early deliveries of Sinovac COVID-19 vaccines, and relatively pricier official development assistance loans (some of which were supposed to fund three high-profile railway projects but were canceled at the last minute).

One has to wonder whether all those were worth the efforts of Filipino lawmakers and policymakers, bending over backward to create a China-funded “third telco,” which gave a foreign country a foothold on the Philippines’ critical information and telecommunications technology infrastructure.

As has been pointed out before, the Philippines has more in common with the US than it has with China, the country’s physical proximity to latter notwithstanding.

Filipino culture is more naturally aligned with that of America, as are many of our societies’ values. Our economies are intertwined, as are our political systems. We are both imperfect democracies, and we both try—with varying degrees of success—to adhere to the rule of law. Both nations value human rights (the US more than the Philippines, of late, admittedly).

And despite both nations’ experiences with their respective previous presidents, Filipinos and Americans, for the most part, continue to shun authoritarian governments. We are natural allies.

In a world when everything is in flux, warm, reassuring words between our two nations’ leaders are undoubtedly welcome.

But, ultimately, the proof of the pudding is in the eating, and it bears watching how the pleasantries exchanged between Presidents Marcos and Biden translate to real-world benefits for the Filipino people, most especially in protecting the country’s interests against an increasingly aggressive China that has continued to throw its weight around the region in defiance of international laws.

Mr. Marcos’ initial step of nudging the country back toward the US sphere of influence must be followed up by concrete actions on the part of the Filipino officials, especially in diplomatic circles and the military establishment.

The government must shed itself of the previous administration’s lukewarm stance versus China and push back through international diplomacy, and flying the flag more staunchly in the disputed territories of the West Philippine Sea. This means keeping the disputed sea lanes open to international traffic, possibly with the Philippine Navy joining ships of its US and other Western counterparts in freedom of navigation operations, especially since Chinese ships regularly restrict access to disputed waters for Filipino vessels, including those of fishermen.

The US, on the other hand, must not waste this golden opportunity to strengthen ties with the Philippines and put its money where its mouth is by reinforcing economic ties between both nations, at a time when both are rebuilding from the ravages of the pandemic.

The opportunity is present for the Philippines and the US to renew its historic relationship on more equal footing. Both countries should not waste it.