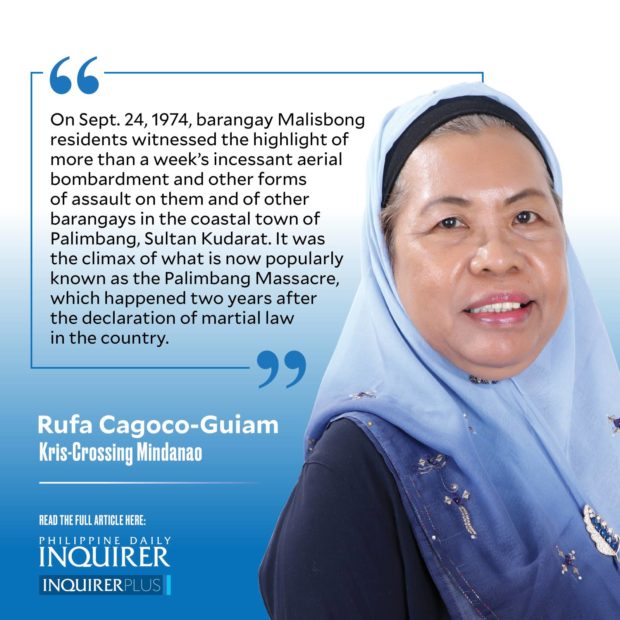 General Santos City—On Sept. 24, 1974, barangay Malisbong residents witnessed the highlight of more than a week’s incessant aerial bombardment and other forms of assault on them and of other barangays in the coastal town of Palimbang, Sultan Kudarat. It was the climax of what is now popularly known as the Palimbang Massacre that happened two years after the declaration of martial law in the country (Sept. 21, 1972). Last Sunday, Sept. 24, was the 48th anniversary of this traumatic part of the history of barangay Malisbong, and of the entire town of Palimbang.

On that fateful day, several hundreds of Magindanawn men who have been holed up inside a mosque in barangay Malisbong, owned by the Tacbil family there, were shot at and fell to shallow graves just a few meters away from the mosque. They were killed in groups of at least 10 each time. They were inside the mosque for almost a week, and were not given enough food or water. One survivor said in a documentary film produced by the Commission on Human Rights in 2015 that at one time, they were even made to drink urine. Since then, several survivors who described their horrendous experiences during that week have died. Among them was the woman who painfully shared how her consent to have sex with a Philippine soldier was “manufactured”—in exchange for food for her husband and family.

On Feb. 28, 2013, then President Benigno “Noynoy” Aquino III signed the law creating the Human Rights Victims’ Claims Board (HRVCB) that former senator Teofisto Guingona III and Sen. Chiz Escudero authored. This was Republic Act No. 10368, amended later on as RA 10766. The HRVCB granted individual financial reparations to victims of atrocious human rights violations committed by Philippine state agents (military, police, and other quasi-security sector agencies) during the martial law years from 1972 to 1986 under President Ferdinand Edralin Marcos Sr. Unfortunately, this law had a limited time frame, only operational from 2014 to 2018, with the last checks for the approved claimants released in early 2019.

Unfortunately, not all victims of human rights violations within the martial law period benefited from RA 10368. Among them were victims and survivors of the Palimbang Massacre.

A former Philippine National Police general, Lina Sarmiento, chaired the HRVCB. Funds for its operations (financial reparations to individual claimants) were sourced from the P10 billion recovered by the Philippine government from Swiss banks, where part of the ill-gotten wealth of the conjugal dictatorship of Ferdinand Sr. and Imelda Romualdez-Marcos were deposited. The board was operating with a limited number of staff members—only 60 personnel—who had to go through each claimant’s papers meticulously, painstakingly, to ensure complete provenience of the claims.

The HRVCB law also provided for the memorialization of the heroism of the victims in addition to the financial reparations.

Throughout its lifespan, the HRVCB received a total of 75,749 individual claims and only approved or released reparation money to 11,103 victims, representing about 14.65 percent of the total number of claims.

Among the 14 percent who had their claims approved, there were only 16 individuals from Palimbang, according to one of the survivors of the massacre.

On Aug. 11, 2022, three solons from the Makabayan bloc in the House of Representatives jointly filed House Bill No. 3505, or the New Human Rights Victims Reparation and Recognition Act of 2022. Kabataan Rep. Raoul Manuel, Alliance of Concerned Teachers Rep. France Castro, and Gabriela Rep. Arlene Brosas filed the bill in the hope of providing reparations to all other victims of martial law human rights violations. The proposed law also seeks the granting of nonmonetary benefits to the victims like basic social and health services, and scholarships for special education programs, including higher education and vocational skills training.

Will HB 3505 become a law under the present composition of the House?