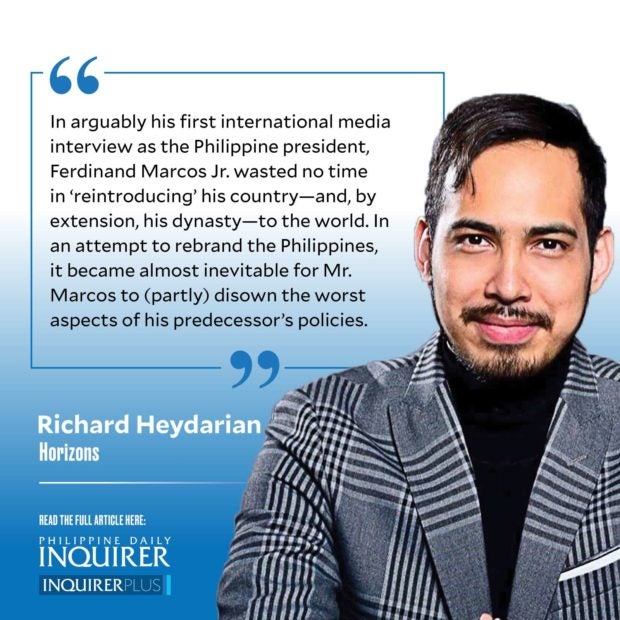 In arguably his first international media interview as the Philippine president, Ferdinand Marcos Jr. wasted no time in “reintroducing” his country—and, by extension, his dynasty—to the world. He projected himself as an above-the-fray statesman, who shuns even “indulg[ing] in any of that political back-and-forth concerning the Marcos family.”

In his extensive interview with the Associated Press, the President presented himself as a constructive (rather than a divisive) leader, whose primary concern is this: “What are we going to do to get into a better place?” This was clearly his pragmatic “Mr. Unity” side.

In an attempt to rebrand the Philippines, it became almost inevitable for Mr. Marcos to (partly) disown the worst aspects of his predecessor’s policies. “His people went too far sometimes,” he admitted, referring to allegations of excesses under Rodrigo Duterte’s controversial drug war. “We have seen many cases where policemen, other operatives, some were just shady characters that we didn’t quite know where they came from and who they were working for,” he continued, recognizing international concerns over the mindless conduct of counter-narcotics operations.

His “reintroduction” of the Philippines also extended to the realm of foreign policy, which surely pleased his American hosts. During his talk at Asia Society in New York City, Mr. Marcos took a tough stance on our territorial disputes with China by insisting that “we have no [substantive] territorial conflict with China,” since “[w]hat we have [is] China claiming territory that belongs to the Philippines.”

In fairness, Mr. Marcos’ remarks in the US were consistent with his uncompromising policy pronouncements in recent months, including his expressed commitment to uphold the 2016 arbitral tribunal ruling at The Hague, which nullified the bulk of Beijing’s expansive claims in the South China Sea.

Contrast this to Duterte, who not only dismissed the arbitral tribunal award as a “piece of paper,” but also went so far as to portray China as his “‘protector’ and called on smaller nations to “remain meek and humble” in exchange for the Asian superpower’s “mercy.” The former president even advocated for “co-ownership” of precious resources in the West Philippine Sea under joint exploration agreements with China.

While the former president cussed at and repeatedly threatened to end his country’s alliance with America, Mr. Marcos has warmly embraced deeper strategic relations with the Philippines’ sole treaty ally. During his meeting with US Secretary of State Antony Blinken last month, the new president underscored how “we are too closely tied because of the special relationship between the United States and the Philippines and the history that we share.”

The West has clearly recognized the dramatic shift in the Philippines’ foreign policy orientation. No less than US President Joseph Biden pointed out how the two countries have overcome “some rocky times” and that his administration is committed to enhancing a “critical, critical relationship” during his personal meeting with Mr. Marcos on the sidelines of the United Nations General Assembly.

So far, what we are witnessing is not only a “great rebranding,” but also a “great moderation” of key policies inherited from the former administration. Take, for instance, National Security Adviser Clarita Carlos’ rejection of a whiplash counter-insurgency strategy in favor of a more multidimensional and human security-driven approach, which is focused on “geographically, challenged, isolated, and disadvantaged areas.”

Despite running under Partido Federal ng Pilipinas, Mr. Marcos has also largely jettisoned any concerted push for constitutional change, which wasn’t even mentioned, to the chagrin of staunch Duterte supporters, in any of his major speeches in his first 100 days in office. He has also adopted a far more open stance, notwithstanding a few caveats, on the potential restoration of the ABS-CBN franchise, even admitting that “the suspicion is that it is always because of the political positions that they took which are against [Duterte].”

In a column six months ago, (“Marcos Jr. presidency: Three possible scenarios,” 3/22/22), I argued, “Should Ferdinand Marcos Jr. win with massive and unprecedented margins and cultivate reliable superpower partners overtime, I won’t be surprised to see a different and more self-assured side of him.” It remains to be seen, however, if the current policy reboot can extend well beyond the political honeymoon phase.