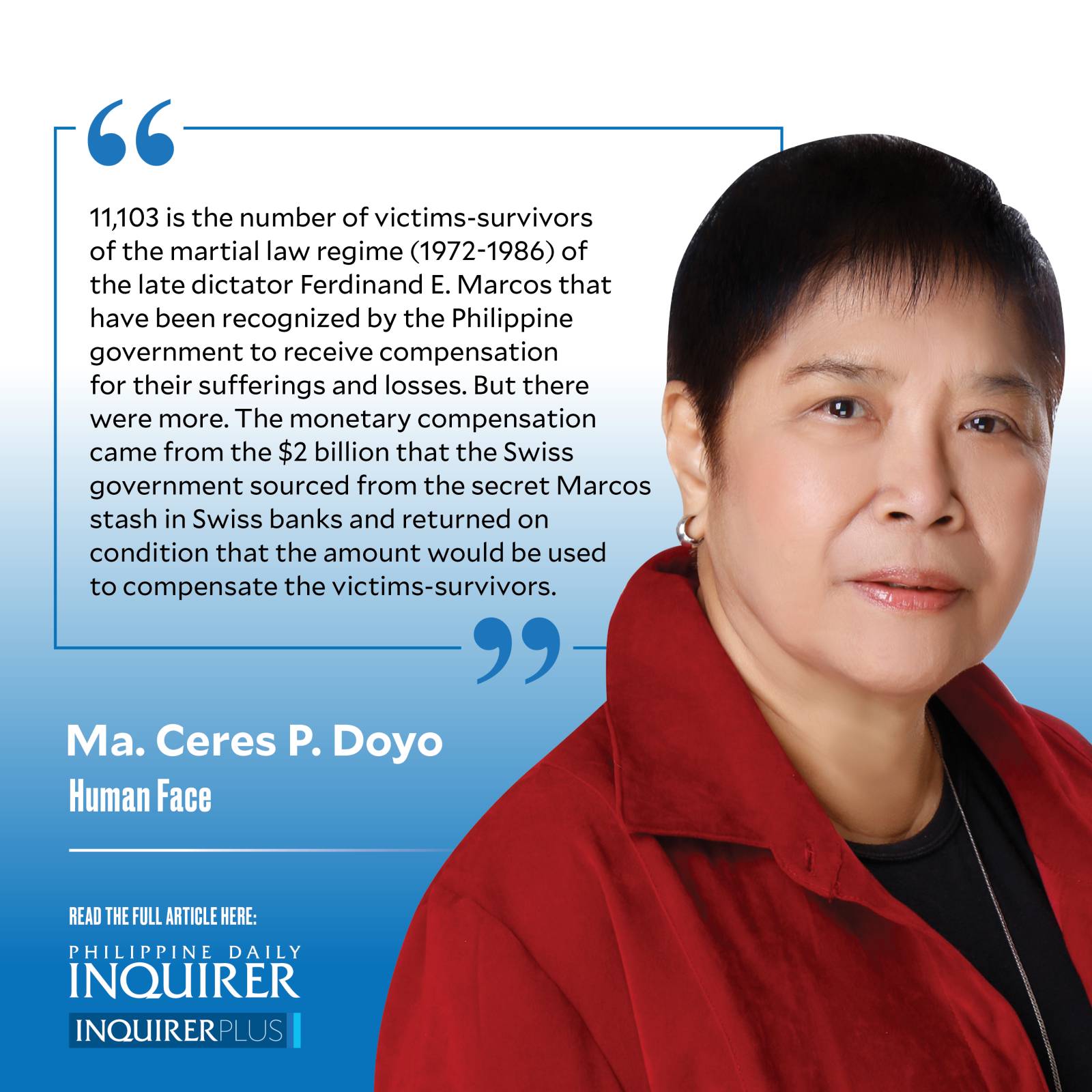 These days, I ponder the freedom we had lost 50 years ago and the struggle to win it back. I express my profound gratitude to those who fought and perished in the night. Eternal rest be yours in the valley of the brave.

Last Wednesday, Sept. 21, was the 50th anniversary of the declaration of martial law during the Marcos dictatorship that lasted from 1972 to 1986. In activities nationwide, many wore black to signify mourning and the resounding resolve in four words: Never again, never forget.

11,103 is the number of victims-survivors of the martial law regime (1972-1986) of the late dictator Ferdinand E. Marcos that have been recognized by the Philippine government to receive compensation for their sufferings and losses. But there were more. The monetary compensation came from the $2 billion that the Swiss government sourced from the secret Marcos stash in Swiss banks and returned on condition that the amount would be used to compensate the victims-survivors.

Republic Act No. 10368 passed by Congress and signed by President Benigno Aquino III made this possible. A memorial archives-museum is provided in the law, and barring blocks from the present government, the long-awaited structure should be up soon if not sooner.

Note that the claims granted the 11,103 are different from what a Hawaii court granted the more than 6,000 victims-survivors who filed a class suit against the Marcos estate in the 1990s. The court granted $1.2 billion in compensation but, in this case, the claimants and their lawyers will have to search for the hidden wealth themselves while the Philippine government is also on the hunt. Finders keepers, you know. In the Hawaii case, the victims-survivors’ compensation has trickled in only two tranches until more hidden wealth is discovered.

These two different and separate landmark rulings to compensate victims-survivors—RA 10368 and the Hawaii court decision—prove and confirm that there were indeed abuses committed and there were victims during the martial law years.

Two days ago, on Sept. 21, the 50th anniversary of the imposition of martial law that marked the beginning of the dark years that many Filipinos endured, the documentary “11,103” was premiered at the UP Film Center and the Bantayog ng mga Bayani. I was familiar with four of the seven cases featured in the documentary. More on this another time. (What do you know, I had a two-second appearance in the documentary.)

Here is the statement from martial law victims-survivors. In places where the date was solemnly and tearfully remembered, many wore black to signify mourning.

“We, the survivors and victims of the Marcos dictatorship, on the 50th year of the 1972 declaration of martial law and in the face of attempts by Ferdinand Marcos Jr.’s forces to distort Philippine history, hereby attest:

“That we bear personal witness to the abuses and atrocities committed by the dictator Ferdinand Marcos Sr. against the Filipino people, including the brutal suppression of dissent, the epic plunder of the nation’s resources, and the perpetuation of a culture of authoritarianism;

“That we reject and denounce any attempt to represent that darkest of periods in our modern history as any kind of golden age.

“That the incumbent President acknowledge the torture, illegal imprisonment, enforced disappearance, and other human rights violations that took place between 1972 and 1986;

“That the long delayed, non-monetary reparations due martial law victims be given at the soonest possible time;

“That an immediate stop be put to the Red-tagging, so clearly reminiscent of martial law years, of political and social thinkers and activists, and;

“That the Marcos heirs continue to be accountable for the Marcos family debts to the Filipino people, whose present and succeeding generations they have impoverished, not alone by the remaining P126 billion in ill-gotten wealth they have not returned and the P203 billion in estate taxes they have not paid.

“National unity can be based only on truth, justice, and the free exercise of civil liberties and human rights.

“Thus, we swear once more to dedicate the remainder of our lives to bearing the torch of freedom under the threat of renewed repression, to cast the light of truth on our past and present, and to ensure that justice comes to those who struggled and bore witness before us.

“We, the survivors of martial law, will not have a single victim of the dictator die in vain.”