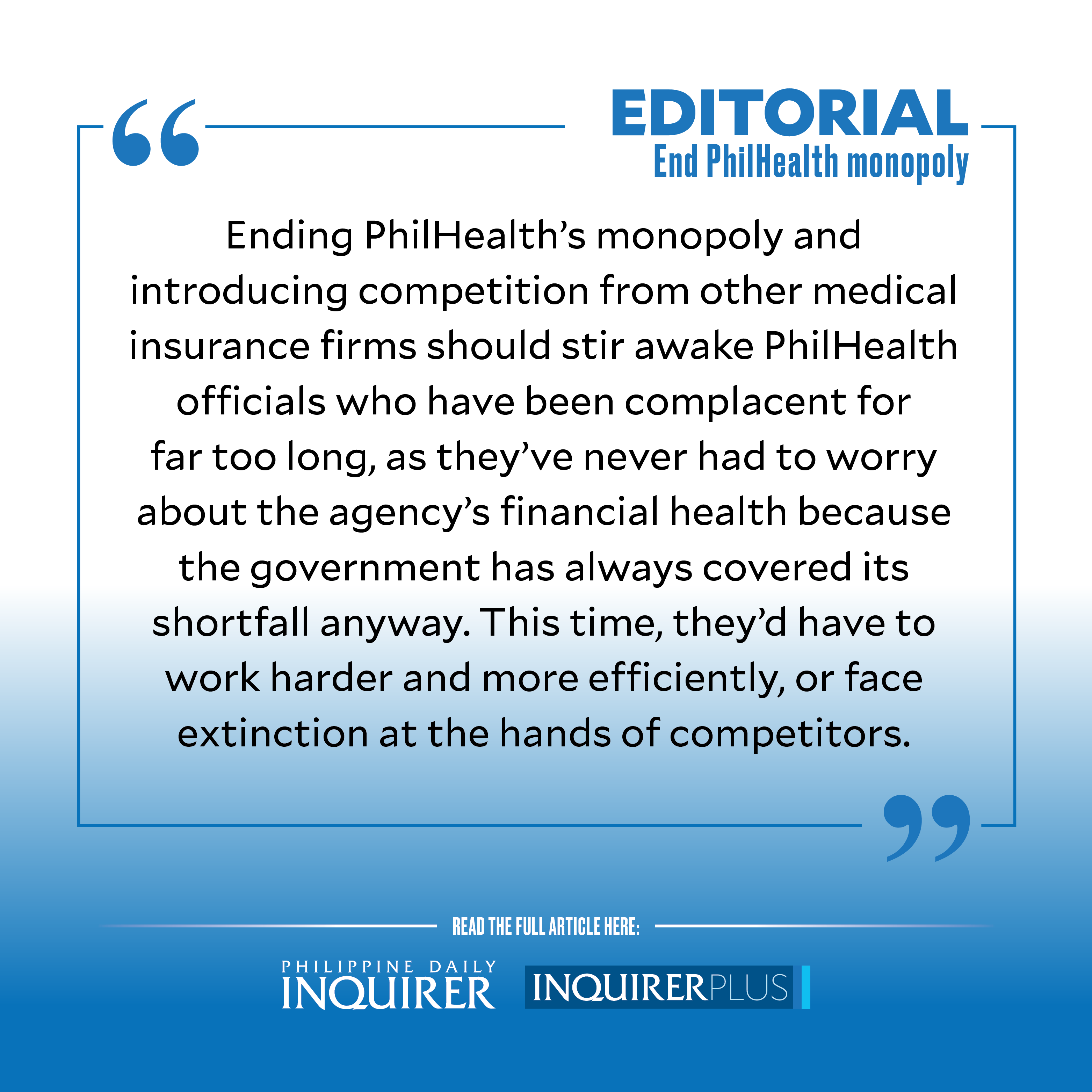 By definition, an insurance firm is one that collects small regular payments (or premium) from clients, pools these funds, and makes them grow by investing in money-making undertakings. The funds may be drawn from when certain clients encounter financial needs, whether they be indemnification for damage to property, loss of life, or issues affecting health.

By definition, this business model is supposed to allow any given insurance firm to be self-sustaining and able to stand on its own feet, without the need for regular cash infusions from its owners.

Under local laws, an insurer that fails to meet this basic requirement is taken to task by regulators, its owners required to recapitalize the firm, and its managers ordered to restructure the business model. Failure to do so means being eventually closed down by the government to protect clients from further investing hard-earned funds in a money-losing venture.

Using these metrics, an organization like the state-owned Philippine Health Insurance Corp. (PhilHealth) should have been sanctioned long ago by the Insurance Commission, and most likely stripped of its license, with a cease and desist order posted on its shuttered doors.

But PhilHealth continues to do business, limping from fiscal year to fiscal year by collecting billions of pesos from millions of Filipinos through legally mandated salary deductions, which are augmented by more billions in subsidies from the national government and other state firms.

Every so often, the agency manages to shock the public with its official admission of its funds’ shorter-than-average actuarial life—a chronic announcement that PhilHealth officials use to justify another hike in contribution from its members, or to lobby for more financial assistance from other state-owned firms.

Despite the regular hike in contributions, however, PhilHealth gives its members only the most basic benefits that are actually a pittance compared to the level of health insurance coverage in more advanced economies, or those with better thought out policies.

On the average, a PhilHealth coverage would mean a 10- to 20-percent reduction in medical bills. It is by no means inconsequential, but it is far from ideal.

At the same time, private hospitals and clinics that treat patients covered by PhilHealth insurance have to wait anywhere from one to six months to get reimbursed by the agency for their services.

At one point last year, the delays were so bad that private hospitals threatened to stop accepting patients relying on PhilHealth insurance as the government agency was behind on its payment of the billions of pesos it owes these medical facilities. Any other private health insurer with such delinquent record would have faced closure orders from regulators and legal action from clients.

No wonder Filipinos—especially those who need medical attention the most—continue to suffer substandard health insurance.

In the face of these persistent problems, what can lawmakers do to remedy, once and for all, PhilHealth’s sorry financial plight while improving the quality of health care offered their constituents?

The solution is simple: lawmakers should end PhilHealth’s monopoly on mandatory health insurance deductions from the monthly paycheck of its members. Congress should allow employees to have the option of choosing whether they’d like to be covered by PhilHealth, or a slew of other private health insurers.

At the same time, PhilHealth should continue its health coverage of indigent Filipinos earning below a certain threshold who should be given the basic medical insurance offered by private firms

Ending PhilHealth’s monopoly and introducing competition from other medical insurance firms should stir awake PhilHealth officials who have been complacent for far too long, as they’ve never had to worry about the agency’s financial health because the government has always covered its shortfall anyway. This time, they’d have to work harder and more efficiently, or face extinction at the hands of competitors.

It is time to restructure the country’s public health insurance system to make it more responsive to the needs of the time.

In its current incarnation, and despite several exposés on its excesses and corruption-prone bureaucracy that should have led to reforms within the agency, PhilHealth remains dependent on the financial crutches provided by the national government. It has to work and strive to be part of the solution. As it is, PhilHealth is undeniably and callously part of the problem.

Read Next
Beyond a disease-based model of health
EDITORS' PICK
Smart awards ‘Subscribe & Get Lucky’ Raffle Promo winners
Score lots of freebies and discounts on vivo 10.10. Sale
House energy committee chair Arroyo bats for cheap electricity
Marcos wants to accelerate efforts to build agricultural sector back
10,000 to less than 500: How people are driving the tamaraw to extinction
Bongbong Marcos to slain journalist’s kin: ‘We are ready to help’
MOST READ
34 people killed in mass shooting at daycare center in Thailand
Marcos admin gets high approval ratings in Pulse Asia survey
Tulfo blasts DBM for ‘acting like God’ in cutting budget
Woman shot dead by live-in partner in Laguna
Don't miss out on the latest news and information.