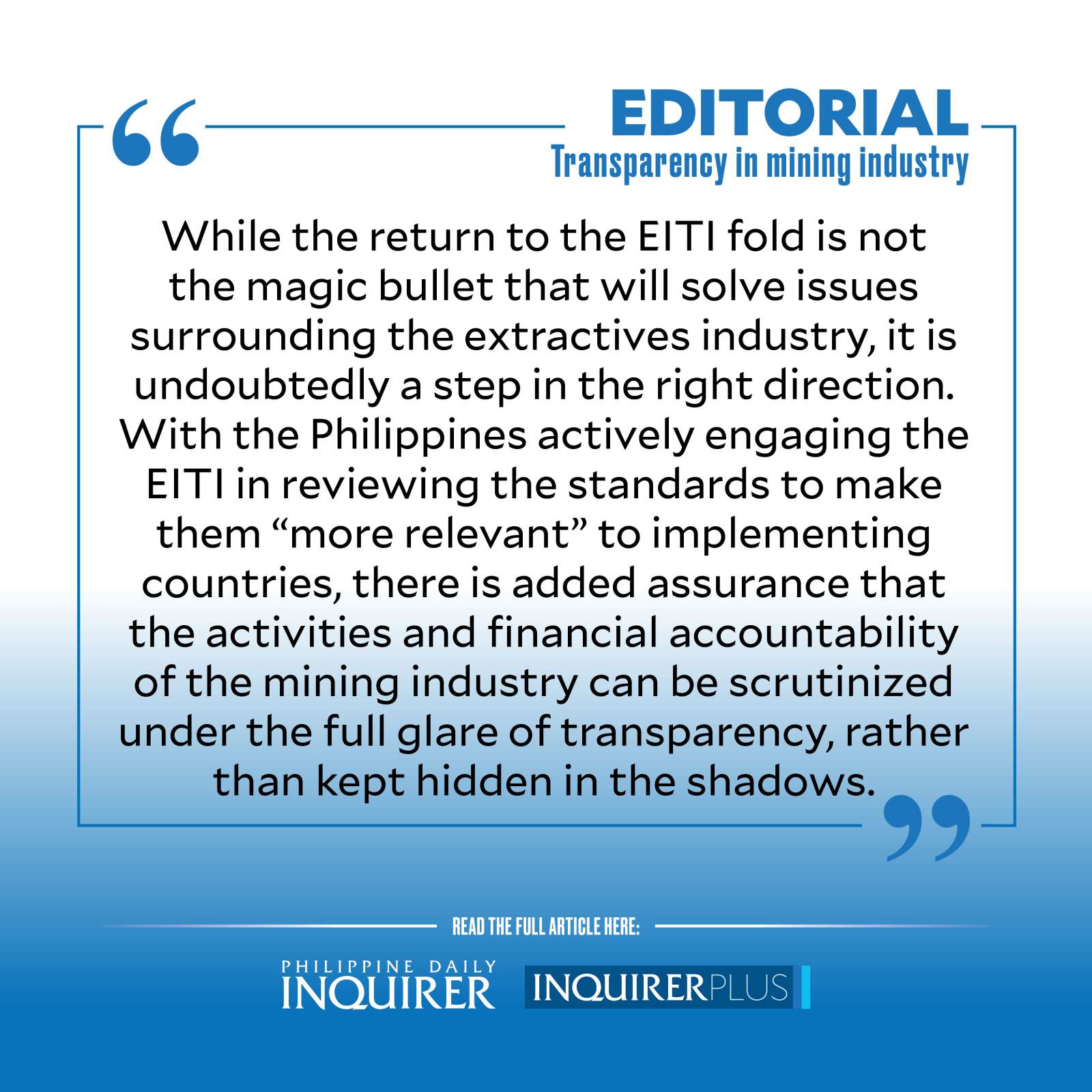 Finance Secretary Benjamin Diokno took the mining industry by surprise last week with the announcement that after quitting in June, the Philippines was rejoining the Extractive Industries Transparency Initiative (EITI) as a demonstration of the Marcos Jr. administration’s “commitment to transparency and good governance.”

In his letter to EITI chair and former New Zealand prime minister Helen Clark, Diokno said the EITI, which prescribes a standard for transparency and accountability in the mining, oil, and gas industries, “will complement the administration’s agenda on transparency and accountability” and help maximize the extractive sector’s potentially significant contribution to the country’s sustainable economic growth.

“We believe that EITI is an important tool for resource-rich countries like the Philippines to improve transparency and increase accountability in the management and governance of the extractive industries,” said Diokno.

Headquartered in Oslo, the EITI advocates a global standard meant to ensure transparency of revenues—in the form of taxes, royalties, signature bonuses, and other payments—from natural resources, particularly petroleum and minerals.

Extracting companies in implementing countries are expected to publicly disclose the payments they make to the government as well as host-communities.

The Philippines started implementing the EITI in 2013 under the Aquino administration following the formation of the Philippine EITI, a multistakeholder group chaired by the Department of Finance (DOF) and composed of representatives from the government, industry, and civil society.

According to the DOF, the PH-EITI has produced seven country reports on the mining, oil, gas, and coal industries, and reconciled more than P362 billion in revenues from these activities from 2012 to 2019.

In 2017, the Philippines even became the first among some 50 countries to have fully complied with the 2016 EITI standards.

But in one of his last official acts as finance secretary of the Duterte administration, Carlos Dominguez III decided to withdraw the Philippines from the EITI, assailing the EITI assessment process as “subjective, biased, and unfair.”

“The Philippines has no confidence in the ability of the EITI to undertake an impartial, transparent, and evidence-based validation process,” Dominguez said in his June 20, 2022 letter to Clark.

Dominguez was particularly incensed by the finding that the Philippines had only “partly met” the standard on full engagement with civil society.

In coming up with its February 2022 implementation score, the EITI noted in its report “instances of intimidation of civil society activists and journalists” related to their stand on extractive operations or investments, as well as the “apparent use of the 2020 Anti-Terrorism Act to justify attempts at police intervention, judicial action, or intimidation which may have limited civil society freedoms.”

Dominguez rejected the findings and said the country was “treated unfairly” by the EITI board, which used “irrelevant metrics” and relied on “unvalidated reports” in assessing the status of civil space in the extractives sector.

“We refuse to be taken hostage by unverified allegations from foreigners and people who have no mandate from the electorate,” said Dominguez.

Diokno, who likewise served during the Duterte administration, has fortunately broken off from his predecessor’s policy, fanning hopes of greater accountability in the extractives industry, with which civil society has traditionally been at odds due to concerns over regulatory capture, environmental destruction, and displacement of indigenous peoples from ancestral domains where most mining claims are located.

While the return to the EITI fold is not the magic bullet that will solve issues surrounding the extractives industry, it is undoubtedly a step in the right direction.

With the Philippines actively engaging the EITI in reviewing the standards to make them “more relevant” to implementing countries, there is added assurance that the activities and financial accountability of the mining industry can be scrutinized under the full glare of transparency, rather than kept hidden in the shadows.

Read Next
An internet for the common good
EDITORS' PICK
Pagasa: No tropical cyclone expected in the next few days
Having confidential funds not a DepEd norm – Pimentel
House energy committee chair Arroyo bats for cheap electricity
Motorcycles, smartphones, and cash prizes up for grabs in TNT’s ‘Tuloy Ang Saya’ Raffle in Mindanao
NDRRMC confers posthumous award on 5 fallen Bulacan rescuers
Smart, TNT launch more powerful and value-packed Double GIGA+ 50 offer
MOST READ
Sharon Cuneta ‘turned away’ at Hermes boutique in Seoul, welcomed by LV
Having confidential funds not a DepEd norm – Pimentel
Marcos in Singapore for F1 Grand Prix – source
WATCH: Coleen Garcia dances with Billy Crawford in France’s ‘Dancing with the Stars’
Don't miss out on the latest news and information.