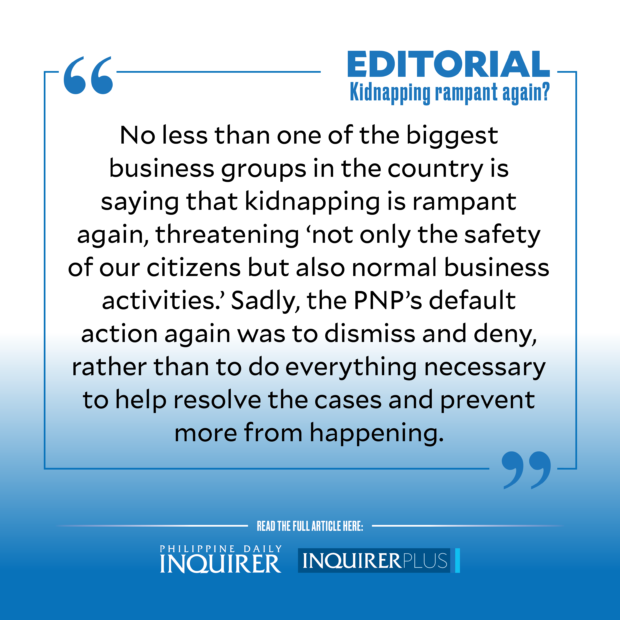 Not long after the Philippine National Police dismissed reports of rising crimes as a hype, the Philippine Chinese Chamber of Commerce and Industry Inc. (PCCCII) sounded the alarm on the new spate of kidnapping cases in Metro Manila and other areas in Luzon.

A Sept. 5 statement of PCCCII president Lugene Ang said the group received reports of 56 kidnapping cases in the last 10 days alone, the number not including those abductions that have not been reported.

“Recent disturbing events create a state of fear and uneasiness among the Filipino-Chinese community. This is because of the recent rampant kidnapping cases both in Metro Manila and some parts of Luzon,” said the statement read by PCCCII secretary general Bengsum Ko during a press conference with House Minority Leader Marcelino Libanan and PNP officer in charge and deputy chief for administration Lt. Gen. Jose Chiquito Malayo.

The PCCCII said the syndicates kidnap not only Filipino-Chinese victims but also Filipino children.

Malayo, however, immediately disputed the PCCCII’s numbers, saying the police recorded only four incidents of kidnapping this year. PNP spokesperson Col. Jean Fajardo later clarified that only 27 kidnapping cases have been reported so far this year, down from 38 in 2021.

She said 20 of the recent cases involve Chinese, Vietnamese, and Taiwanese nationals related to the Philippine offshore gaming operators (Pogos).

Fajardo said the PCCCII could not present a list of the 56 kidnap victims, thus the PNP Anti-Kidnapping Group (AKG) had sought a meeting with the group to validate its report.

The Filipino-Chinese community had been the target of vicious kidnap-for-ransom gangs in the past. In 1996, Teresita Ang-See of the Citizens Action Against Crime reported that 665 members of the community were kidnapped in the past three years, 31 of whom have been killed. In November 2003, See said that Coca-Cola executive Betty Chua Sy, who was kidnapped and killed, was the 156th kidnap victim that year.

Now, no less than one of the biggest business groups in the country is saying that kidnapping is rampant again, threatening “not only the safety of our citizens but also normal business activities.”

Sadly, the PNP’s default action again was to dismiss and deny, rather than to do everything necessary to help resolve the cases and prevent more from happening.

Apparently, the PNP and its AKG are the last to know about the return of these kidnap-for-ransom activities. Ko even gave a chilling description of how the syndicates are conducting their brutal crime: “These kidnappers are worse than animals. They use torture and intimidation, rape women and send the videos to the victim’s relatives demanding huge sums of money. In some cases, victims were even sold to other kidnapping groups. These are unprecedented and beyond human comprehension.’’

Another sensational kidnapping case was that of pharmaceutical executive Eduardo Tolosa Jr., who was kidnapped on July 19. A burnt corpse identified as Tolosa’s was found much later in Pampanga. More recently, some senators called for an investigation into cases of missing young women. And then there was the unsolved cases of 34 missing sabungero or cockfight enthusiasts linked to an online sabong company of businessman Charlie “Atong” Ang.

The PNP, with its extensive intelligence network and resources, must do better than fudge statistics to get to the bottom of these kidnapping incidents. It should work hand-in-hand with groups like the PCCCII, which has good information and leads that can help in preventing and solving cases.

And while in most cases of kidnap-for-ransom of wealthy victims, families choose to deal with the kidnappers for the safety of their kin out of fear and helplessness. This is probably because they do not have enough confidence in the police to get their loved ones unharmed.

In a note of exasperation, the PCCCII president appealed to Congress to “take a more active role and act swiftly to suppress criminals and eradicate these kidnapping syndicates.”

“No bail should be granted to them and restore peace and order in our community to ensure peace and harmony of our nation,” Ang said.

And even if the kidnapping cases involve those foreign nationals working in the Pogo industry, the PNP must not belittle those incidents (20 this year alone!) as they still reflect the bad peace and order situation in the country, which allows these criminals to do their nefarious activities without fear of the police.

Libanan correctly pointed out that the spate of kidnapping cases is “clearly a law enforcement problem.”

Whether these are petty crimes victimizing the ordinary people or kidnap-for-ransom targeting the wealthy, the PNP must do its job of protecting Filipinos. And it begins not with denial but a more proactive enforcement.