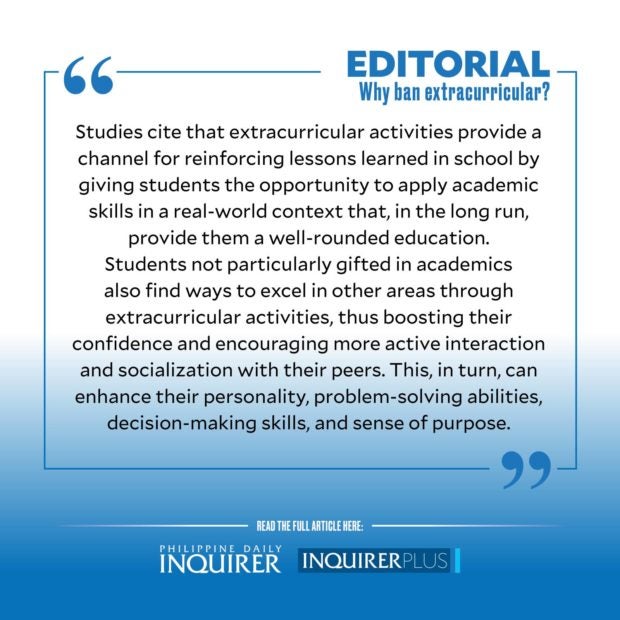 If it ain’t broke, why fix it?

The question comes to mind following Vice President and Education Secretary Sara Duterte’s recent announcement that the Department of Education (DepEd) intends to ban extracurricular activities for school year 2022-2023, to address the “learning gaps” caused by the pandemic.

“We need to focus on the academics of our students to catch up on the learning losses during the two years they weren’t able to have in-person classes,” Duterte said during a visit to a public school in Jordan, Guimaras.

“We will release a department order that would detail what cocurricular and academic activities are allowed to be conducted this year. We are prohibiting extracurricular activities,” she added.

But is the ban on these activities the best response to the dismal performance of Grade 4 and Grade 8 Filipino students in the 2019 Trends in International Mathematics and Science Study, where the Philippines ranked lowest among 58 participating countries?

In a statement, the Alliance of Concerned Teachers (ACT) scored DepEd’s “fixation with achieving the too cumbersome competency list of the K-to-12 curriculum,” and said that “it should (instead) consider the work-life balance of both learners and teachers so that more effective and relevant learning can happen.” The group also warned that the ban may cause academic burnout among students who need an outlet to freely express their other competencies outside of a classroom setting.

In fact, studies cite that extracurricular activities provide a channel for reinforcing lessons learned in school by giving students the opportunity to apply academic skills in a real-world context that, in the long run, provide them a well-rounded education.

Students not particularly gifted in academics also find ways to excel in other areas through extracurricular activities, thus boosting their confidence and encouraging more active interaction and socialization with their peers. This, in turn, can enhance their personality, problem-solving abilities, decision-making skills, and sense of purpose. Research has also shown that, contrary to the argument that such activities could distract students from their studies, the more positive attitude toward school when they are allowed to flourish in other arenas can lead to better grades and higher academic aspirations. Juggling classroom lessons with outside activities also builds good time management skills. Another study suggests that involvement in extracurricular activities can decrease the likelihood of alcohol and illicit drug use and other behavioral problems.

Also put into question is the timing of the ban, coming as it did after pandemic lockdowns forced students to go online and spend hours on screen to follow health protocols. This, according to Inquirer columnist Anna Cristina Tuazon, reduced school life to “pure work,” which led to a drastic loss of motivation as many students either dropped out or took prolonged leave of absence from school.

“This also led to a spike in mental health problems among students who feel burned out and feel that they were just requirement-churning robots,” Tuazon wrote in her Inquirer column.

Some groups also asked why the DepEd ban does not include the mandatory military training for students, the Reserve Officers’ Training Corps (ROTC), which is being aggressively pushed by the DepEd secretary and supported by the President to “mobilize the students for national defense preparedness.” DepEd spokesperson Michael Poa said the agency has thrown its full support behind the ROTC—one of three options under the college-level National Service Training Program—“because it adheres to our core values of being makabansa (patriotic).”

But groups of teachers, parents, and students opposed to the idea cited the added expenses involved, and the culture of corruption that led to the ROTC’s abolition as a requirement for graduation some 20 years back. Activist groups also slammed the wrong message such stress on military training could have on students, with unquestioning obedience being at its core.

In banning extracurricular activities, is the DepEd afraid of students developing leadership skills, critical thinking, and maybe joining rallies? Keeping them within the classroom limits their development as critical thinkers after all. Is this the ultimate goal?

While the DepEd still has to release the guidelines on its prohibition of extracurricular activities, it would do well to look at the much bigger problems plaguing the country’s educational system: the classroom shortage, the alleged corruption behind the overpriced but outdated laptops for teachers, the toxic workload, dismal salaries and lack of teaching personnel, and, according to ACT, “the problem is in the curriculum of the K-to-12 itself, because it weakened the teaching of Filipino and Philippine history.”

Surely, these are more crucial and urgent issues whose resolution would definitely improve the academic performance of Filipino students much more than banning extracurricular activities.