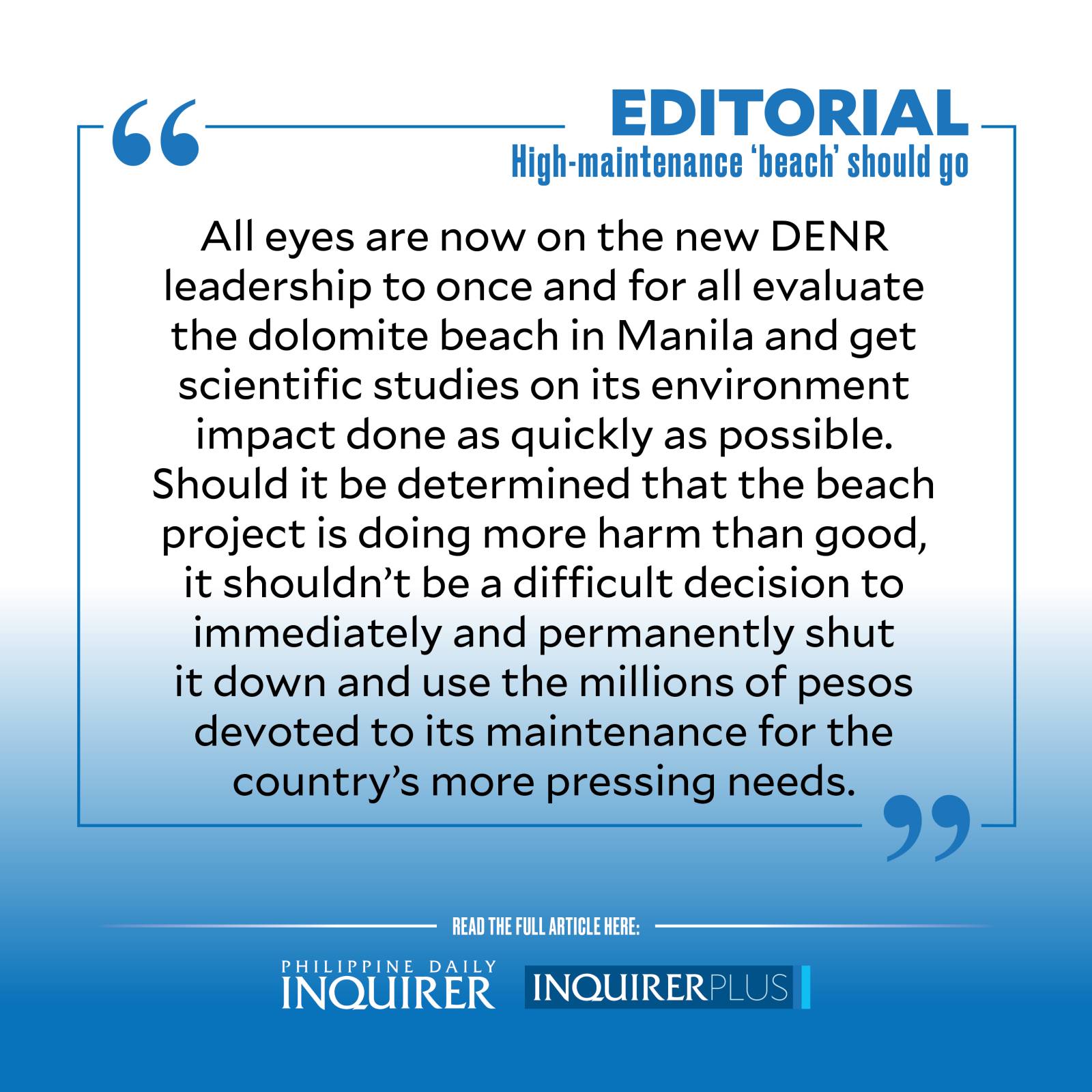 Two years after the Department of Environment and Natural Resources (DENR) stirred unnecessary controversy by dumping crushed dolomite on a 500-meter stretch of land along Manila Bay, the agency will finally study the environmental and social impact of the P389-million “beach nourishment” project that critics have slammed as a massive waste of public funds.

Yulo-Loyzaga, a known environmentalist and chair of the International Advisory Board of the Manila Observatory before joining the Marcos Jr. administration, said the DENR was “looking very closely” at the impact of filling part of Manila Bay’s naturally gray shoreline with crushed dolomite to mimic the famous white sand beaches of Boracay.

The DENR, she said, would “continue to evaluate it … using our scientific evaluation, as well as the social vulnerability evaluation that we intend to implement.”

This is a welcome—albeit long delayed—departure from the stance taken by former DENR chief Roy Cimatu, who had consistently brushed aside pointed criticisms against the project, as well as warnings of its potential risks to public health and the environment.

Under Cimatu’s watch, the DENR also stubbornly refused to conduct a thorough and scientific study to justify the continued dumping of dolomite at a cost of P28 million to taxpayers for the mineral and for “geo interventions” intended to prevent the dolomite from being washed out to sea. Instead, the former official merely justified it as a “beautification project beneficial to the environment.”

The dolomite beach project was described as an “enhancer” of the Manila Bay rehabilitation project launched in 2019 in accordance with the Supreme Court directive for government agencies to clean up, rehabilitate, and preserve the bay.

The DENR, however, admitted that the artificial beach—which then presidential spokesperson Harry Roque claimed was needed for the mental health of a pandemic-weary people—was not part of the original Manila Bay Sustainable Development Master Plan adopted by the National Economic and Development Authority to “restore the water quality of Manila Bay.”

More tellingly, DENR Undersecretary Jonas Leones admitted during the House hearing in 2020 that “the process for environmental impact assessment was not followed”—with consequences now keenly being felt.

Oceana, an international nongovernment organization dedicated to protecting the world’s oceans, revealed that the dolomite dumped in the area from September to December 2020 had already been reclaimed by the sea. With the “beach” eroded by at least 300 square meters between December 2020 and February 2021, there was a need to continuously replenish the area near the Baywalk strip on Roxas Boulevard with dolomite shipped all the way from Cebu.

Oceana vice president Gloria Estenzo-Ramos also emphasized that the project is just a “band-aid” solution and will not significantly contribute to the improvement of Manila Bay as mandated by the Supreme Court. Concerns are more deep-rooted and would need more extensive solutions, such as reducing chemical, organic, and plastic pollution, installing water treatment facilities, and banning the cutting of mangroves.

As early as 2020, the University of the Philippines Marine Science Institute (UP-MSI) similarly urged the government to rethink its ill-advised beautification project, saying that the sand “will only erode, given the hydrodynamic conditions of the bay.”

Even with the breakwater, rising sea levels and larger waves during typhoons, especially with climate change, can penetrate and pound the baywalk area. “Continuously replacing the sand will be even more expensive,” the UP-MSI pointed out.

Last month, the heavy flooding in the streets of Manila that stranded thousands of commuters was initially blamed on the erosion of the dolomite beach, although the Metropolitan Manila Development Authority has since backtracked and shifted the blame on the ongoing construction of three pumping stations in the area.

Despite that turnaround, the repeated and expensive “nourishment” of the dolomite beach after every typhoon points to the inescapable conclusion that the erosion of the artificial beach is inevitable—and unacceptable, given our limited resources and an economy still struggling to recover from the effects of the pandemic.

All eyes are now on the new DENR leadership to once and for all evaluate the dolomite beach in Manila and get scientific studies on its environment impact done as quickly as possible.

Should it be determined that the beach project is doing more harm than good, it shouldn’t be a difficult decision to immediately and permanently shut it down and use the millions of pesos devoted to its maintenance for the country’s more pressing needs.