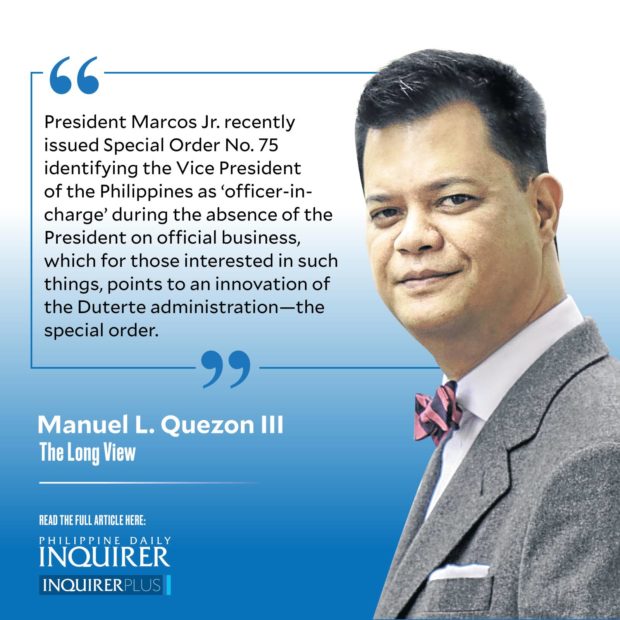 President Marcos Jr. recently issued Special Order No. 75 identifying the Vice President of the Philippines as “officer-in-charge” during the absence of the President on official business, which for those interested in such things, points to an innovation of the Duterte administration—the special order.

The original arsenal of presidential issuances, following the American executive system, was composed of the executive order, the administrative order, and the proclamation for civilian mattera and general orders for the military. Later on, memorandum orders, circulars, and letters of instruction were created. What these are and the differences between them, are enumerated in the present Administrative Code, which also mentions special orders: “Acts and commands of the President in his capacity as Commander-in-Chief of the Armed Forces of the Philippines shall be issued as general or special orders.”

The innovation of the Duterte administration, while it seems somewhat related to the military—in military practice, “a routine order issued by an authorized military headquarters that includes matter concerning individuals but is not of general interest”—seems to be the carrying-over of local government executive practices, to the national executive.

Among the many uses of special orders to designate specific officials for specific tasks, President Rodrigo Duterte designated the executive secretary (Special Order No. 1265, 2018; No. 420, 2019; No. 1346, 2019; ); or the secretary of justice (No. 528, 2019; No. 631, 2019; No. 1061, 2019), as an “Officer-in-Charge to take care of the day-to-day operations in the Office of the President and to oversee the general administration of the Executive Department … and … if necessary, act for and on behalf of the President, except on matters that the President is required by the Constitution to act in person.”

What is interesting though is the form has changed—most significantly under the present administration and its predecessor—the substance has remained remarkably consistent.

When the modern presidency began in 1935, precedents arose that would be retained by many subsequent administrations. Among the most basic is the principle that presidents retain their powers wherever they may be, and that as a consequence these powers cannot, and should not, be delegated except under very limited circumstances. A press statement from Dec. 7, 1936, by President Manuel L. Quezon enumerated why:

“Each Secretary of Department will attend and decide matters pertaining to his department which under the law he has authority to decide. To those that require my approval, if necessitating urgent action, my consent can be had by cable. Of other departmental business, which although within the province of a Secretary of Department are of such importance or affect the general policies of the Government in such a way that the Department head thinks he should consult me, the Secretary may also communicate with me by cable.

“In my absence, the cabinet may hold its weekly meetings to consider routine matters under the presidency of the Vice-President. Such official business as is ordinarily carried on in my Office under the signature of the Secretary to the President shall continue to be transacted as heretofore.

“Should a case arise in which the personal signature of the president is required and the matter has been consulted and decided by me, the Vice-President, after writing my name above his signature, may authenticate the document with his own signature, for and in behalf of the president.”

President Sergio Osmeña, despite having no vice president, still found it necessary to forestall any potential confusion and issued an identical Executive Order (No. 67, 1945); in his absence, the executive secretary presided over Cabinet meetings; President Manuel Roxas, for his part, didn’t travel abroad and neither did President Ramon Magsaysay, so neither needed to issue this kind of order. By the time President Elpidio Quirino issued his own Executive Order (No. 299 in 1950) he already had a vice president who could preside over Cabinet meetings (he issued identical EOs: No. 470, 1951; No. 519, 1952; No. 605, 1953.

In his time, President Carlos P. Garcia did the same, but because his vice president was the first elected from the opposition party, and thus, not given any job whatsoever, Garcia instructed (No. 315, 1958) that the secretary of finance should preside over the Cabinet. His reiterations of these instructions (No. 322, 1958; No. 336, 1959; No. 392, 1960; No. 416, 1961) retained the same setup; where once these orders stated presidents could be reached by letter or cable, now radio was cited as a means of reaching the president. For his part, President Diosdado Macapagal issued No. 12, 1962; No. 57, 1963; No. 70, 1964; No. 71, 1964; No. 86, 1964, stipulating the vice president to preside and conduct ceremonial duties while mandating the executive secretary as the point person for all communications.

President Ferdinand Marcos Sr., however, was the first to modify the essential text of the order when he signed Executive Order No. 42, 1966. After reiterating the usual policy statement that the president retains his powers wherever he may be, it moved the section on the vice president from the end to the second paragraph of the order, while explicitly stating that the veep exercised general supervision over the conduct of affairs in executive departments but did not do so with regard to administrative functions. It seems as a sweetener, the vice president was explicitly given permission to receive visitors in the Presidential Study. In terms of departments, the do’s and don’ts were likewise, expanded, likely a shrewd innovation by Executive Secretary Rafael Salas and retained thereafter (No. 110, 1967; No. 114, 1968; No. 177, 1969). During the dictatorship, there doesn’t seem to have been any similar issuance.

With President Corazon Aquino, instead of an executive order, the same text was issued as an Administrative Order (No. 4, 1986) and by President Benigno Aquino III, it had become a mere memorandum signed by the president. For her part, President Gloria Macapagal Arroyo generally preferred to announce that Vice President Noli de Castro would be caretaker, a term popularized by President Fidel V. Ramos, who usually designated the executive secretary as such.

This remarkable continuity in policy and practice may escape the notice or awareness of the present vice president, but it’s one ingrained in our institutions including the military. The press releases of summons to command conferences by the veep, the bowing, scraping, and saluting, provide a pleasant impression of delegated power, but it’s only the appearance of it and far from the substance of it.