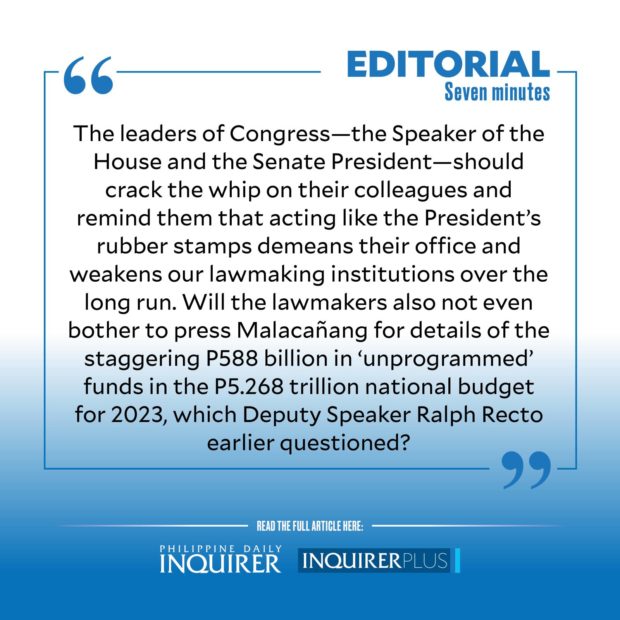 That’s all it took for the appropriations panel of the House of Representatives to approve the proposed P9-billion budget of the Office of the President for next year.

Citing parliamentary courtesy to a coequal branch of government, the number of questions Executive Secretary Vic Rodriguez was asked by some House lawmakers about the spending bill totaled a big fat zero.

The session was terminated after 10 minutes, despite over half of the budget request for 2023 coming in the form of confidential and intelligence funds.

A similar treatment probably awaits the proposed P2.3-billion budget of the Vice President—over thrice the amount allocated to the previous holder of the office—which is also chock full of discretionary funds. We would not be surprised if the majority would simply let this one slide, too.

The worst part of it is that this is not the first time Congress has given the Chief Executive a free pass when it comes to approving the office’s budget. In varying degrees, lawmakers have also allowed the fund allocation requests of previous presidents—former president Rodrigo Duterte’s budget also receiving the 7-minute express approval service—to breeze through unexamined, without anyone in the hall having yet warmed his seat.

Sadly, we’re almost certain many of these congressmen exercise greater diligence in examining their utility bills or their restaurant chits before handing their credit cards over for swiping.

Yet, these very people—many of whom were elected on promises to safeguard the interests of Filipinos—have so cavalierly abdicated their responsibility to protect the money levied from their constituents through taxes, all in the name of “parliamentary courtesy,” which is probably Philippine legislature shorthand for “not wanting to upset the President and endangering the release of government funds for my district.”

We cannot stress enough how important it is for Congress to exercise the utmost diligence in scrutinizing the budgets of the most powerful elected officials of the land, as well as the various departments and agencies whose top officials make the annual trek to the House of Representatives in Quezon City to defend their funding allocations from being slashed and gutted.

The legislative branch has the duty to ensure that every peso is correctly allocated and judiciously spent. What is the purpose then of having congressional budget hearings if these lawmakers won’t even do a perfunctory examination of these billions of pesos in unspecified allocations?

We lament how the budgets of the Philippine General Hospital and the University of the Philippines, for example, were cut under the proposed 2023 general appropriations law, despite these two institutions having clear and well-defined roles that promote the immediate and long-term good of the nation.

And we lament how lawmakers have tended, in the past, to take to task—nay, bully—officials of agencies that have caught their ire, often browbeating lifelong public servants with demeaning treatment, while these very same people have no choice but to append “Your Honor” to every futile reply they utter.

It is time for lawmakers to stop behaving slavishly toward officials more powerful than them, and behaving like bullies toward those in lower pay grades. It is time for them to treat all members of the executive branch coequally all the time, and not only when it suits their interests or when it is convenient for them.

The leaders of Congress—the Speaker of the House and the Senate President—should crack the whip on their colleagues and remind them that acting like the President’s rubber stamps demeans their office and weakens our lawmaking institutions over the long run.

Will the lawmakers also not even bother to press Malacañang for details of the staggering P588 billion in “unprogrammed” funds in the P5.268 trillion national budget for 2023, which Deputy Speaker Ralph Recto earlier questioned?

If these lawmakers truly want to win favor with the President, the best way is not to give him an easy time, but for them to do their jobs of properly scrutinizing the use of the Filipino’s tax money so that, by the end of his term, the President can stand tall and proud, proclaiming that he went through the congressional budget wringer and passed with flying colors. Any treatment less than that is a disservice to the people by their elected legislators.

But it is another thing altogether for Congress to allow sections of the national budget pertaining to the annual fund allocations of the two highest offices of the land to breeze through unquestioned and unchecked.

The former example is just plain baduy, and the Chief Executive is probably more annoyed than tickled by shameless displays of sycophancy. But the latter is dreadfully dangerous.