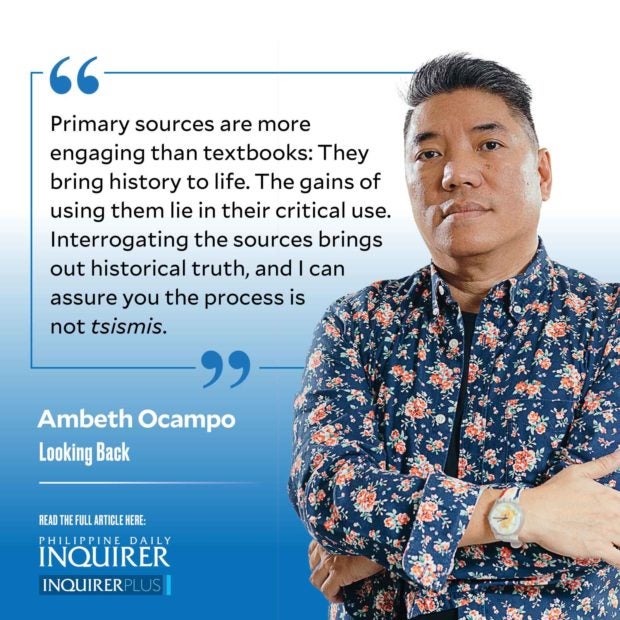 College-level Philippine history is now taught with primary sources, at least in principle. Based on the questions I receive online, almost on a daily basis, it is clear that many students are left to sink or swim without teaching them how to float. If students don’t know what a primary source is, how will they find it online or even in a physical library?

Historians like me, who toil in the air-conditioned comfort of libraries and archives, leave the time before writing or written records—the “prehistoric” period—to anthropologists and archeologists in the field. Traces of historical periods and people as classified either as “primary” or “secondary sources.” The former can be documents, letters, diaries, newspapers, and other resources that were written by participants or witnesses to a historic event. The latter are twice removed for example, Nick Joaquin’s “Rizal in Saga” or my own “Rizal Without the Overcoat” are secondary sources. They are not by Rizal, not eyewitnesses to life in the late 19th century. Primary sources are: Rizal’s “Diarios y memorias” (a compilation of the hero’s journals, diaries, and travel letters) and the multivolume “Epistolario Rizalino” (a compilation of Rizal’s correspondence known to T.M. Kalaw in the 1930s). These are Rizal’s story from his own words.

Unfortunately, our generation is separated from Rizal’s because of time, place, and space. Worse, many of us are separated from the 19th century because of language. Rizal, read in translation, either in English or Filipino, however technically makes the material a “secondary source.” I argue that intent and content, not language and form, should be considered when classifying a source as primary. How can we say that the “Noli Me Tangere” in the original Spanish is primary, while the same novel in translation is secondary?

Over the last National Heroes Day weekend, I listed down some primary sources on the 1896 Philippine Revolution, Andres Bonifacio, and the Katipunan that would be useful for students and the interested general reader. The standard, secondary source for the period is still Teodoro A. Agoncillo’s “Revolt of the Masses: The Story of Andres Bonifacio and the Katipunan” (1956). It will not be fair to say that nothing worthwhile has been written since Agoncillo, as there are many other works, the most prominent being Reynaldo Ileto’s “Pasyon and Revolution: Popular Movements in the Philippines, 1840-1910” (1979). The other four secondary works recommended are: “The Philippine Revolution” by Teodoro M. Kalaw (first edition in Spanish, 1924, and in English, 1925), “The Philippine Revolution” by Gregorio Zaide (1968), Onofre D. Corpus’ “Saga and Triumph: The Filipino Revolution Against Spain” (2002), and last but not least, Milagros C. Guerrero’s “Luzon at War: Contradictions in Philippine Society, 1898-1902” (Ph.D. dissertation 1977, published 2015).

Many participants in the revolution left memoirs. Emilio Aguinaldo has two: “Reseña Veridica de la Revolución Filipina” (1899) that historians thought was ghostwritten by Felipe Buencamino until Aguinaldo’s handwritten drafts in Tagalog surfaced in the US Library of Congress; “Mga Gunita ng Himagsikan” (prepared from 1928-1946) in translation became “Memoirs of the Revolution” (1967) to repudiate and disown the 1957 “A Second Look at America” coauthored with Vicente Albano Pacis. Other actors are: Artemio Ricarte’s “Himagsikan nang manga Filipino laban sa Kastila” first published in Yokohama, Japan in 1927, English translation “Memoirs of General Artemio Ricarte” (1963); Santiago Alvarez serialized his memoirs, from 1927-1928, in the Tagalog weekly “Sampaguita,” it was translated by Carolina Malay as “The Katipunan and the Revolution: Memoirs of a General” (1992); Carlos Ronquillo’s “Ilang Talata tungkol sa Paghihimagsik nang 1896-97” (1996); the lone work by a woman is Gregoria de Jesus’ “Manga Tala ng Aking Buhay” (1928).

There are way more titles that can fit in today’s column, but the sources above are easy to access online or in libraries. Primary sources are more engaging than textbooks: They bring history to life. The gains of using them lie in their critical use. Interrogating the sources brings out historical truth, and I can assure you the process is not tsismis.